Yoko Mada Interviews Hidetoshi Ishii: ‘Japan Should Be the Fortress of Freedom in Asia’

Yoko Mada (“Random Yoko”), a Japanese YouTuber widely popular with viewers both inside and outside of Japan, sat down recently with Hidetoshi Ishii, a Japanese expert on the politics and history of Asia.

Active in his field for more than two decades, Ishii has a broad network of fellow activists and intellectuals, giving him a unique insight into the current state of Asian politics.

You wear several hats, Mr. Ishii. For instance, you’re the head of Fukuoka branch of the Japanese political party Nippon no Kokoro (Party for Japanese Kokoro), and the president of the NPO Yume Dai Asia (Dream – Greater Asia). Many scholars and critics specialize in Asia, but no other expert in Japan seems to be as deeply involved in the field as you.

I make a point of seeing a given situation with my own eyes in order to understand the situation precisely. I study the material from books, of course, but also in person.

Can you tell us about the name of your NPO? What is the “dream” of “greater Asia”?

Before World War II, Asia was almost completely colonized by the West. The only two exceptions were Thailand and Japan. Many of our ancestors in Japan took action with others in Asia to reverse this trend. This is part of our history.

However, resistance to colonialism is not just for history books. We need to be aware that the fight continues even today.

Asia is now being steadily colonized again, not by the West, but by the Chinese Communist Party (CCP). The military power of Beijing’s People’s Liberation Army threatens everyone in Asia.

You visited Hong Kong recently. Why, and what did you learn there? Was resistance to colonialism a focus of your study trip?

Yes. As you know, Great Britain relinquished control of Hong Kong to China in 1997. I visited Hong Kong in late June and early July of this year because I wanted to see the 20th anniversary of the handover with my own eyes.

But the bigger reason was that I see Hong Kong as the front line of the battle to protect freedom and democracy in Asia. What happens to Hong Kong from now on will be a bellwether for the future of Asia overall.

Before the 1997 handover, Beijing promised Hong Kong it could retain its full autonomy, except for diplomacy and national defense. Freedom of speech and democratic universal elections were also guaranteed. But after two decades, Beijing’s reassurances have all proven to be lies.

On June 30, the square around the Clock Tower in Tsim Sha Tsui, Kowloon—where the pro-independence rally was to be held—was blocked off with barricades. The pro-independence leader was surrounded by about a hundred policemen and threatened with arrest if he attempted to carry out any political activity. As a result, the leader ended up making a speech at an event held by a school union on a campus because that was the only option left.

On July 1, 60,000 Hong Kong Democrats gathered for their own protest, but this number was less than half the turnout in the past. It’s apparent that they’re losing their power. After the failure of the Umbrella Revolution—a pro-democracy sit-in street protest which stretched over three months in 2014 in the center of Hong Kong—the Chinese Communist Party is oppressing the Hong Kong Democrats completely. 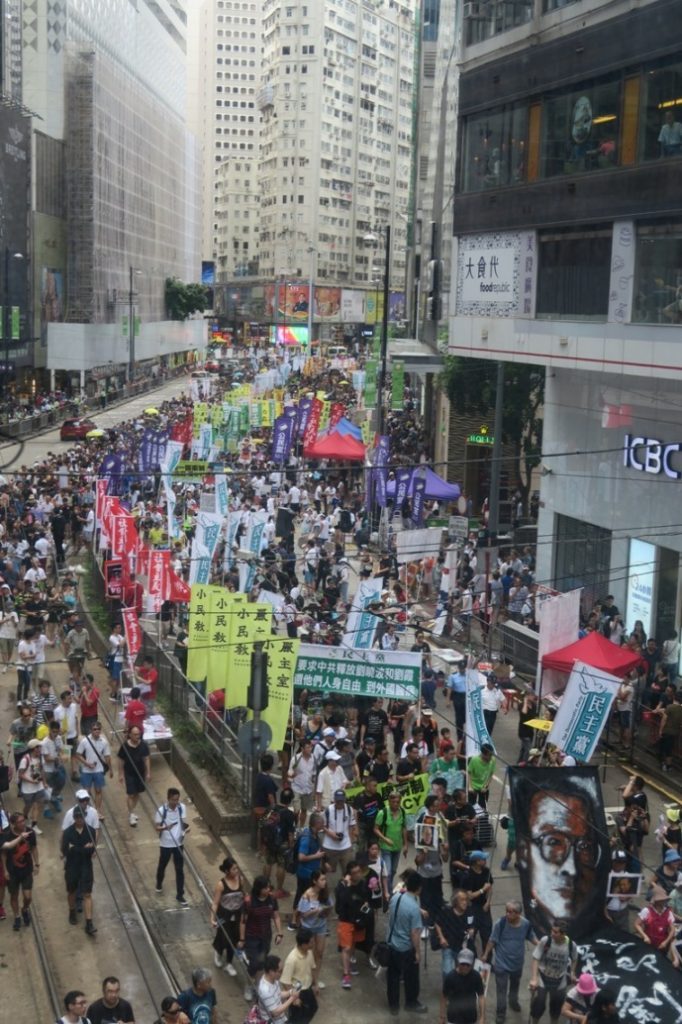 Speaking of the CCP regime, the death of Nobel laureate Liu Xiaobo was a major story worldwide. What are your thoughts?

I feel so strongly about the CCP’s treatment of Liu Xiaobo that I held a protest against the Chinese government. The mainstream media widely reported on the protests and memorial events around the world held in honor of Liu Xiaobo. However, in Japan, at least for the first week following Liu’s death, the only activity was my protest in Fukuoka.

The Japanese government is unnecessarily deferential to the Chinese government. Sadly, even the administration of Shinzo Abe, who is often described as a hawkish prime minister, is taciturn in the face of Beijing’s gross violations of human rights, Liu Xiaobo’s and a host of others’.

Where do you think these problems are leading us?

One problem is that the Democrats in Hong Kong fail to distinguish their allies from their enemies. In Japan, as the Liu Xiaobo case makes clear, human rights advocates and liberals never question China. Japanese conservatives stand alone in confronting Beijing. And yet, some Pan-Democrats in Hong Kong recently built a comfort woman statue in front of the Japanese consulate there. In effect, the Hong Kong Pan-Democrats are alienating their only real friends in Japan. In mistaking their allies for their enemies, they are only weakening themselves while emboldening their CCP oppressors.

I have a message for Americans, as well. The US is supporting groups of young people in HK calling themselves Pan-Democrats or Supporters of Self-Determination. However, the US is so far not supporting those calling for Hong Kong independence. Americans should make a clear show of solidarity with those who are standing up to Beijing.

There’s also a hidden danger for the US in supporting the Hong Kong Democrats. As their name implies, this group wants democracy in Hong Kong—but they also insist on strong Chinese nationalism. Right now, that nationalism is predicated upon animosity towards Japan. But nationalism can be a fickle thing. It is not farfetched to imagine that such nationalism might quickly shift to be anti-American, too.

What do you think will happen to Hong Kong and China from now on?

The other day, a Tibetan teacher said that, in the past, Tibet was promised a high level of autonomy and became an “Autonomous Region of China.” But now, there are outrageous massacres and human rights violations going on in Tibet. Likewise, Beijing vowed to hew to the “One Country, Two Systems” policy, and made Hong Kong a “Special Administrative Region” of China when Hong Kong was handed over by the UK. But now, freedom and democracy in Hong Kong are crushed under the CCP’s iron fist. China is also trying to lure Taiwan in with the same promises of “One Country, Two Systems.” But if you look at history, the worth of those promises becomes clear. Hong Kong is about to follow the path that Tibet took. If Taiwan follows in Hong Kong’s footsteps, then Taiwan’s fate is obvious.

This is why I see Hong Kong as the front line of our battle against the CCP in Asia. If we’re able to protect Hong Kong now, then there’s hope that we can push back the situation in Tibet, Uyghur, and South Mongolia.

What do you think Japan should do as a leader in Asia?

I think the biggest obstacle is the lack of self-awareness among the Japanese that we’re a leader of Asia in the first place. We can’t achieve anything if the Japanese don’t even have any will to begin with.

With that in mind, what I think is needed for Japan is to have the capability to attack our enemies. In Japan, the debate about North Korea’s extremely reckless missile launches has finally started to include questions about whether it’s time for Japan to be able to fight back if provoked. People in other countries will probably be shocked to learn that Japan is almost completely incapable of suppressing enemy fire at the source. If North Korea launches a missile, we can do nothing but wait and then try to shoot each missile down as it enters Japanese airspace. We cannot counterattack. If North Korea launches a hundred missiles and we miss just one, the carnage in Japan will be unimaginable. But even then we have no choice but to remain passive and just duck for cover while North Korea attacks us with impunity.

The same thing can be pointed out on non-military issues, as well. Japan is always kept busy with counterarguments against claims made by the Chinese. Whether it’s disputes over history or territory or some other issue, the pattern is always the same: the Chinese side insists on something, and Japan refutes. In other words, China has all the initiative. We can do nothing but play defense.

It is time to stop reacting and start advancing our own arguments. We could press China to reveal the truth of Liu Xiaobo’s death, for example. We could demand that they stop violating human rights in Hong Kong. We could demand that China stop its brutal massacres in Tibet and Uyghur. There is an endless list of similar abuses by Beijing. Therefore, we need to raise our voices to point them out and stop the CCP.

There’s no need for Japan to be daunted. We are on the side of human rights, freedom, and democracy. We should approach the international community with full confidence in pointing out China’s horrible record of abuses.

Japan needs to be the fortress of freedom, human rights, democracy, and true peace in Asia. It’s to fight this good fight that I’m active inside of Japan to change our politics while teaming up with politicians, activists, and experts overseas.

“Freedom and Independence for Asia”—this is my motto, but it can’t remain just a dream. There is too much at stake if we fail to make freedom and independence from CCP brutality a reality in all of Asia.