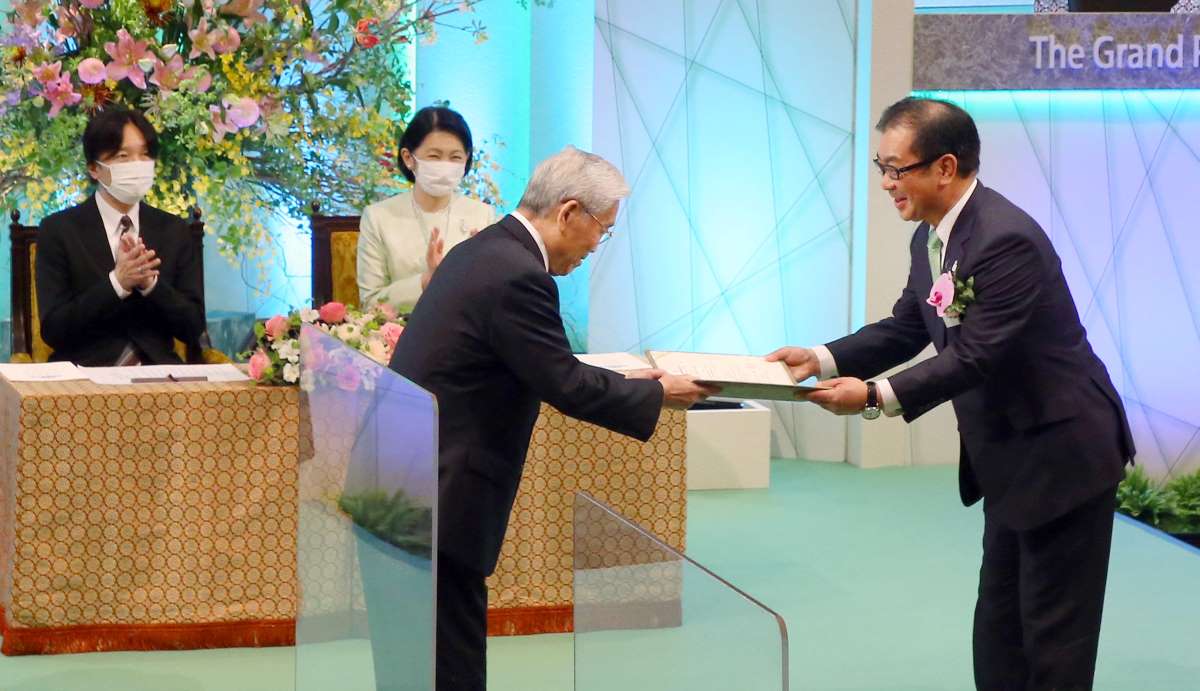 On April 28, the award ceremony for the 30th Grand Prize for the Global Environment Award, sponsored by the Fujisankei Communications Group, was held at the Meiji Kinenkan in Moto-Akasaka, Tokyo. Certificates and trophies were handed out to recipients in the presence of His Imperial Highness Crown Prince Akishino and Her Imperial Higness Princess Kiko, who attended the ceremony.

Fujisankei Group President Hisashi Hieda addressed the audience, saying, “Strong Japanese leadership is required to achieve the United Nations Sustainable Development Goals (SDGs) and to realize carbon neutrality.” He also confirmed his commitment to “push forward with the creation of a prosperous and vibrant country by harmonizing the environment and the economy through this award program.”

Canon Chairman and CEO Fujio Mitarai, who serves as chairman of the award program committee, said, “We will strive to further enhance the social reputation of this award and continue to contribute to the sustainable development of society and the economy.”

Although a reception was not held on April 28 as a precaution against COVID-19, award recipients were given the opportunity to meet Their Imperial Highnesses Crown Prince Akishino and Princess Kiko before the ceremony.

CEO Nakai of Sekisui House, the winner of the Grand Prize, recalled, “Crown Prince Akishino said to me, ‘If the tree-planting network expands, it will have the same effect as building parks.’”

Michiaki Uriu, Chairman of Kyushu Electric Power, the recipient of the Ministry of Economy, Trade and Industry (METI) Minister’s Award, emphasized that the company was praised for its biodiversity conservation efforts, which were undertaken in collaboration with local residents. He expressed his aspirations for the future:

“By continuing these efforts, we hope to contribute to the realization of a sustainable society.”

Every year, the company partners with 800 to 900 local residents to conduct a controlled burn in the Kuju Bogatsuru wetlands in Oita Prefecture for environmental conservation.

The Ministry of Education, Culture, Sports and Technology (MEXT) Minister’s Award went to Nakui Agricultural High School in Aomori Prefecture. School Principal Tomoo Koizumi expressed his joy by saying, “We are happy that the fruits of our research, including the efforts of our graduates, have been recognized.”

The school has been lauded in both Japan and overseas for its efforts to support agriculture in developing countries and received various awards. According to Principal Koizumi, the Crown Prince and Princess said to him, “I hear the name of your school often. You are all working very hard.”

Mizuho Nakai, a 17-year-old third-year student and the leader of the research group, said, “The spirit of helping each other has been the motto of our research. I would like to continue to help those in need through the power of agriculture, utilizing the perspectives of high school students.”

(Read the stories this report is based on in Japanese, here and here.)