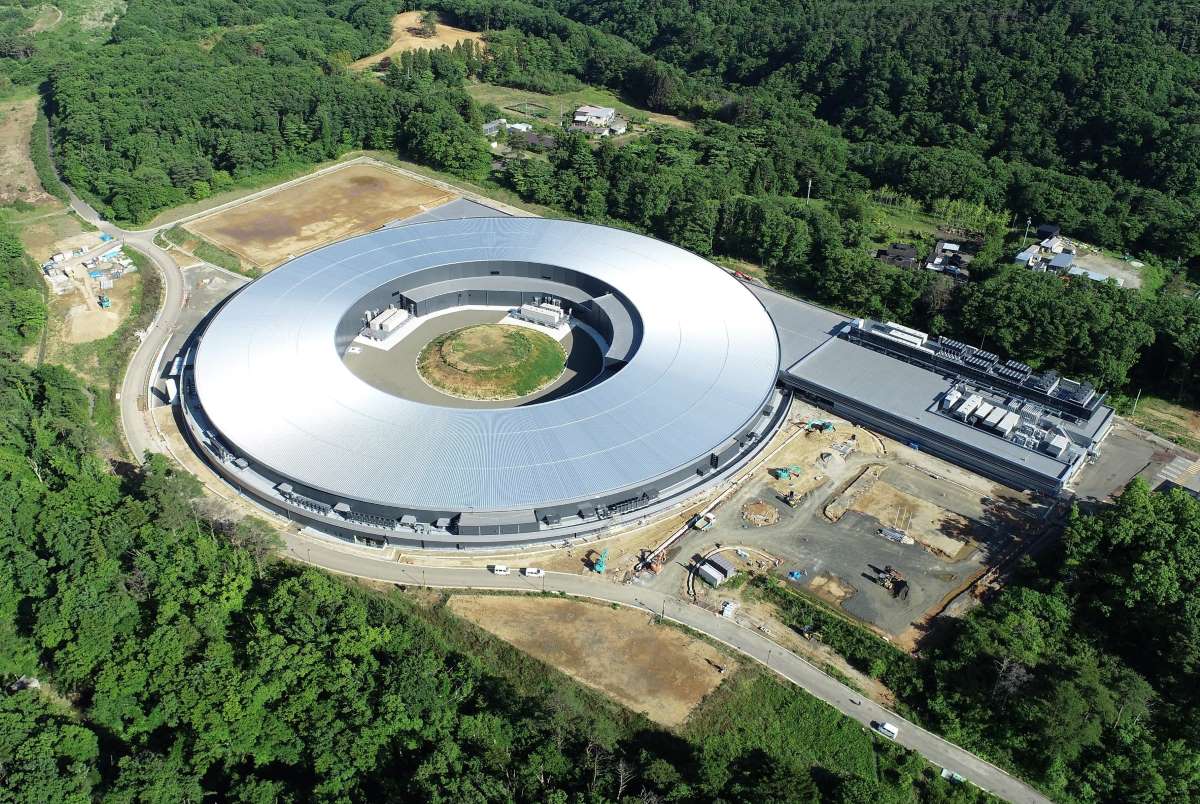 The next-generation synchrotron radiation facility, which is being developed in Aoba Ward, Sendai City, is a massive microscope that can observe substances down to the nano level (one nanometer is a millionth of a millimeter) by making the motion of electrons visible using low-energy soft x-rays. It was nicknamed the “NanoTerasu” in June.

Construction is now 99% complete, with development entering the final stage of bringing in, putting together, and adjusting the analysis machinery. Operation is planned to begin in December of 2023, and expectations are rising for the facility’s uses for effective drug discovery and producing innovative new materials.

Visiting the nearly-completed site, a rapidly innovating “nano world” that could bring Japan back to its status as a technological superpower comes into view.


Lines of Equipment Waiting to be Set Up

About 20 minutes by car from JR Sendai Station, the view suddenly expands as one climbs the mountain road of Tohoku University’s new Aobayama Campus. At the site, which covers an area of ​​about 60,000 square meters, some heavy construction machinery is still in operation, but the large building already appears to have been completed.

Tohoku University Professor Masaki Takata, Director of the Photon Science Innovation Center, is working on the development. He said with emotion while looking across the wide research hall, “Now that the shape of the building has been completed, I feel that something new is finally beginning.”

Here’s how the analysis works. A linear particle accelerator speeds electrons up to nearly the speed of light. They are then shot into an electron storage ring with a perimeter of about 350 meters that is installed in a ring-shaped tunnel, where they circulate in clumps.

Electromagnetic units inside the ring arrange circular orbits for the electrons and prevent the concentrated clusters from dispersing.

As the clumps of electrons change directions due to the magnets, they produce x-rays, a form of light. This synchrotron radiation beamline is extracted into an experiment chamber, where they hit substances within the analysis device to shed light on the nano-level states and functions. Its function truly fits its nickname “NanoTerasu” (illuminating nano).

The building is filled with such devices waiting to be assembled and adjusted. The remaining 1% of the construction process is to fill in the loading ports in the walls once all of the machinery is brought in.

Next Generation and Current Facilities

On the other hand, newer facilities introduced techniques that allow high-precision control of electrons. One is to increase the number of electromagnets. Dr Takata explains:

Current models have up to two electromagnets per unit, but the next-generation facilities have more than that, with four for NanoTerasu.

Due to this increase, the strength with which electrons clump together increases, making it possible to change the direction of motion several times. Thus, the ring can be made smaller.

Furthermore, the synchrotron radiation is stronger. The radiation emitted by NanoTerasu is approximately 100 times brighter than that of current models, so smaller amounts of energy are sufficient. At NanoTerasu, the electrons are accelerated to an energy of 3 GeV (giga electron volts, where one giga electron volt is one billion electron volts), which corresponds to the emission of low-energy soft x-rays, half of SPring 8’s 8 GeV high-energy hard x-rays.

Many innovations will be born from this,” expects Director Masaki Takata of the Photon Science Innovation Center.

Hard x-rays are good at observing the fine structure of substances, but the soft x-rays of NanoTerasu are better for understanding the states and functions of the substances. Due to the extremely strong light, the behavior and spin of electrons, which determine how matter functions, can clearly be seen.

As a result, it is expected that the understanding of substances will progress rapidly, and that revolutionary innovation will occur in a wide range of fields. For example, the development of catalysts and polymer materials that promote chemical reactions, magnetism/spintronics, and drug discovery.

NanoTerasu will complete the delivery and installation of the equipment by the end of 2021. It will start operation by emitting the first synchrotron radiation in December 2023. Plans are to open the facility to other research institutions in April of 2024. Once in service, NanoTerasu is expected to be used by 15,000 researchers annually, and the ripple effect into the domestic economy is estimated to reach ￥1.9017 trillion JPY ($13.2 billion USD) over 10 years.

Dr Takata says, “Researchers from various fields will gather from all over the world and share cutting-edge knowledge, which will lead to many innovations. It will also lead to the improvement of Japan’s scientific capabilities.”