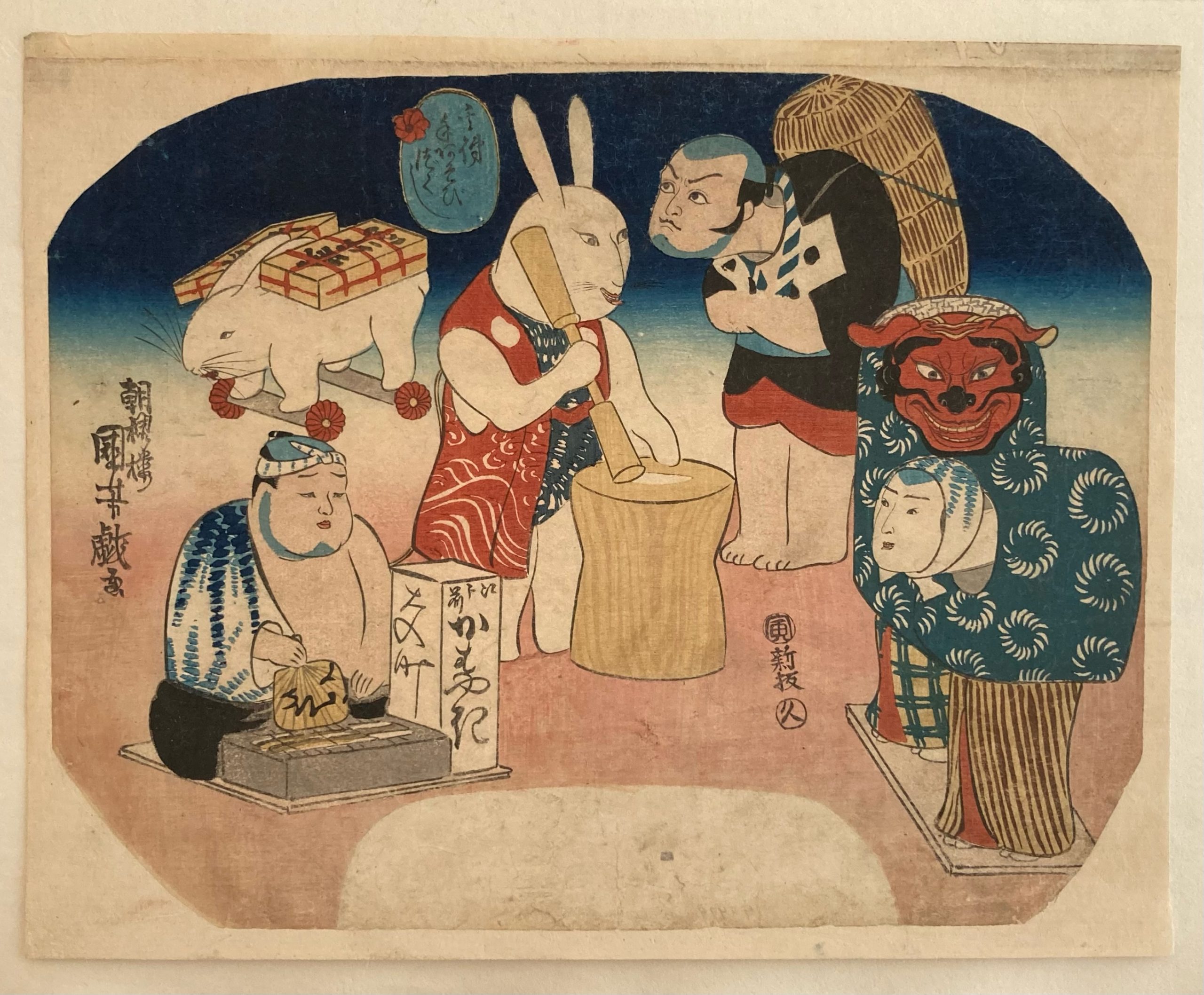 Sono omokage teasobi-zukushi, by Utagawa Kuniyoshi. (From the collection of Toshihiko Isao.)

It's been a while since my last article. Last time, I discussed our ancestors' fight against the plague. This time I'm changing the theme and showing you some fun ukiyo-e caricatures by Utagawa Kuniyoshi (1797-1861) and his disciple, Yoshifuji.

The first image is Sono omokage teasobi-zukushi, a picture to paste onto a fan. It is enviable that the people of Edo (present-day Tokyo) used such amusing fans.

Depicted on these fans is a kind of doll made of papier-mâché known as hari-ko. It's special feature is that it sways when you lightly press the doll at the head or arms with your finger. The faces are those of popular kabuki actors of the time, which must have been even funnier to people at the time than they are today.

Kuniyoshi's ability to draw caricatures of actors is typical of his style and character. Caricatures of actors had been banned due to government restrictions on extravagant culture, and yet he was able to circumvent the ban with this kind of picture.

Cavorting With the Thunder Gods

Next is Ryuko kaminari-zukushi. This is another fun picture in which the demons, which are usually scary, actually make us laugh with their comical behavior.

The image speaks for itself so eloquently that it may be unnecessary, but allow me to provide some commentary. In the upper part of the picture, above the clouds, there are demons in charge of creating snow, rain, and lightning. Below, demons are making dried lightning bolts and coloring the clouds. Meanwhile, a demon covering its ears because it is afraid of thunder and despises its mortar-like sound, can be seen at the bottom as well.

Kuniyoshi's depiction of harvest dance demons rejoicing in thunderstorms and other scenery is excellent.

The title of this print, Ryuko Kaminari-zukushi also contains wordplay. Ryuko is a pun that refers to the transition from light to dark. But it also means "contemporary."

The design of the title cartouche, which resembles a drum, an instrument traditionally viewed as a tool to create thunder, is also interesting. This is an image that truly showcases Kuniyoshi's talent for designing stylish prints.

The next print is Rabbit Sumo by Utagawa Yoshifuji, Kuniyoshi's disciple.

The ukiyo-e shows rabbits fighting each other intensely, pretending to be sumo wrestlers. In fact, from about the fourth (1872) to the sixth (1874) year of the Meiji era, it became popular to breed rabbits to make money. At that time a lot of prints depicting rabbits were sold. However, this bubble soon burst because it was only a temporary fad.

However, many print series featuring rabbits remain. This is one of the masterpieces among those prints from that era. The four-character ring names (shikona) of the rabbit sumo wrestlers are also delightful, because they are reminiscent of the characteristics of rabbits.

Lastly, let us have a look at another one of Yoshifuji's specialties: toy pictures. This one is entitled Shinban andon utsushi kageboshi.

Normally, ghosts are frightening. However, the ghosts depicted by Yoshifuji are very comical and cute. They are not only human ghosts, but also animals and other common household items such as bonsai trees and kettles.

Note how the use of only two colors, red and green, and black silhouettes for maximum effect is astonishing.

These delightful ukiyo-e, which soothed the hearts of the people of the time, still feel like a breath of fresh air for us today.