A Visit to the Atelier | Kuniyoshi’s Beautiful Women 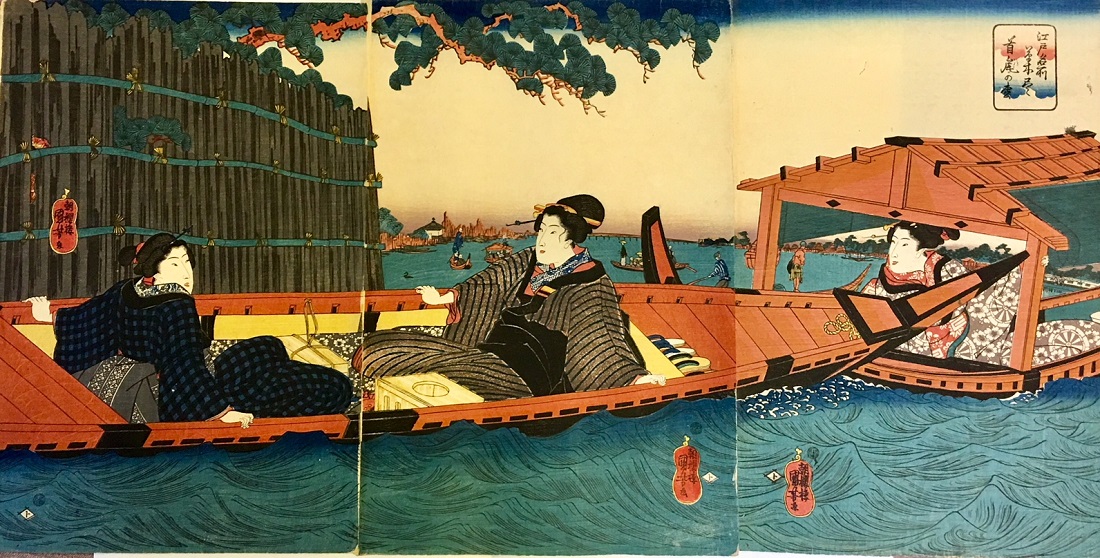 (Part 5 of a Series on the Art of Kuniyoshi)

It has been said that Kuniyoshi’s beautiful women are not seductive. Of course, his contemporaries Eisen and Kunisada drew the courtesans and popular beauties men longed for most at the time, and they were much more influential than Kuniyoshi. While Kuniyoshi also drew courtesans, what he truly wanted to depict were the energetic townswomen working in high spirits. In other words, in my opinion, Kuniyoshi’s pictures of beautiful women are vigorous and amorous “Kuniyoshi beauties.”

Now, let me introduce some of the finest Kuniyoshi beauty pictures. First, here is the print, Likened to Kintaro, from the series “Grateful Thanks for Answered Prayers: Waterfall-striped Fabrics.” 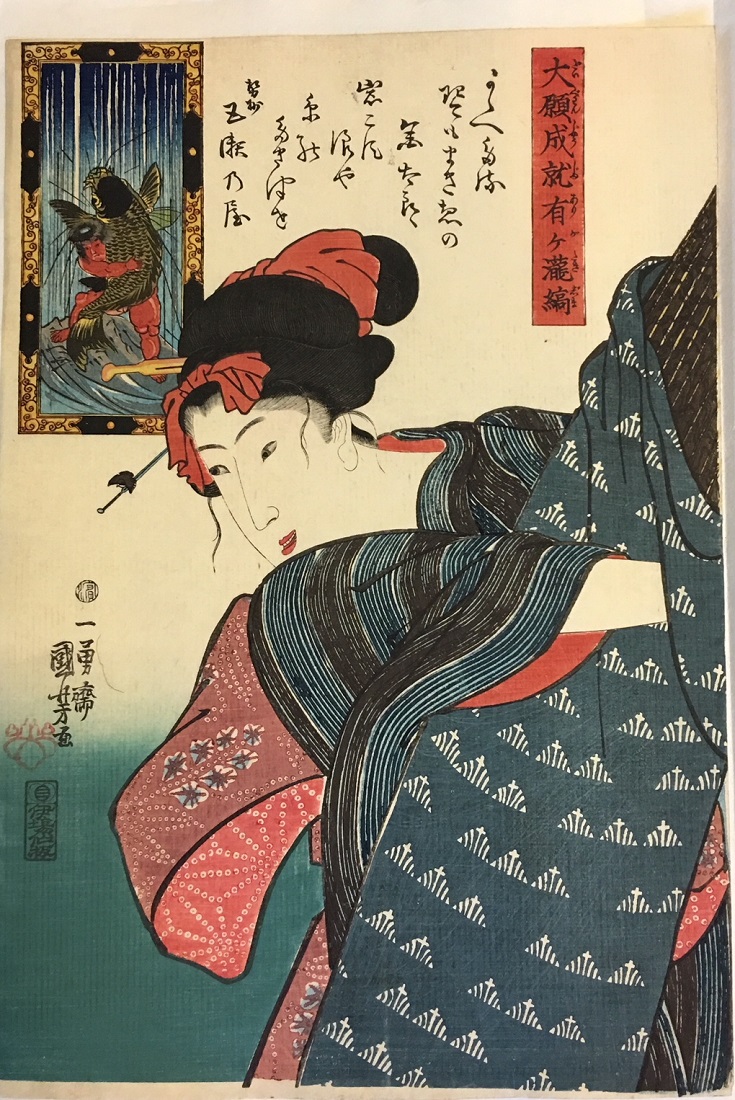 In this favorite work of mine, the pose of the folk hero Kintaro catching a carp, illustrated in the top left of the image, is likened to a beautiful woman holding the Koto, a Japanese zither, a so-called “mitate” picture. It depicts a charming spirited woman from the “low city,” the area in Edo where commoners lived.

Next, please take a look at Likened to Kikujido from the same series “Grateful Thanks for Answered Prayers: Waterfall-striped Fabrics”. Like the print I showed you before this one, this innocent girl holds a Koto and is about to leave for practice. She will surely grow up to ride the rough waves of the world and turn into a bright young woman. 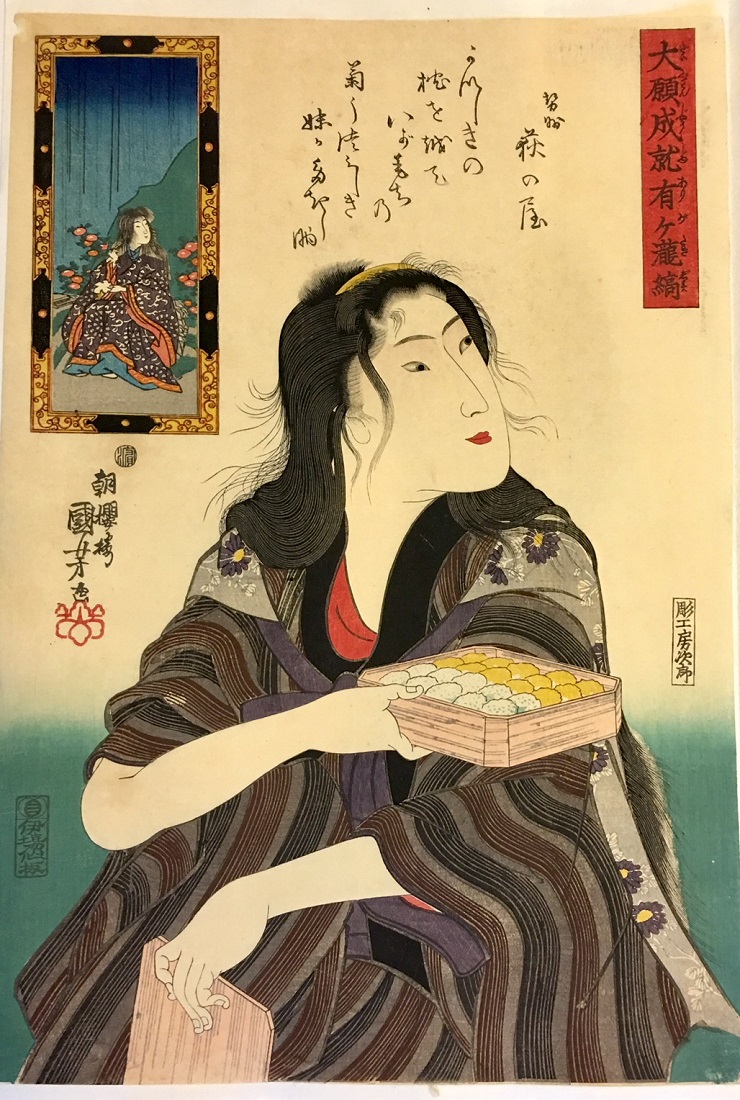 By the way, one fascinating point about this work is the extraordinary carving of the hair. The carving of hair was assigned to a skilled carver, whereas the easy parts were normally left to a novice.

You can see the hard work of the carver here, who had seen the sketch drawn by Kuniyoshi, a work now exclusively in my possession. In its loose disarray, the beauty’s hairline looks magnificent and has been splendidly carved. Please look at the bottom right of the image where we find the inscription “carved by Fusajiro.” He was Kuniyoshi’s favorite carver.

Then there is a print by Kuniyoshi titled Plum Blossoms in the Night. It is a triptych arranged with three beauties in front of it, and a work that sold extremely well.

After this print, the publisher aimed for a similar hit and ordered Cherry Blossoms in the Night. Normally, such a rehash doesn’t turn out as well as one would think, but please have a look.

This print too is a masterpiece. With three women lined up before a splendid double-flowered cherry tree of old age, it is a marvelous work. More than in any other work, the central beauty here is unsurpassed in her strong presence. Indeed, she is a true Kuniyoshi beauty, although I honestly don’t know if this work sold very well.

Finally, the last print I will introduce here depicts a woman enjoying a boat ride on the Sumida River, titled The Pine Tree of Successful Conclusion from the series “Plants and Trees at Famous Places in Edo”. In this image, Kuniyoshi has ingeniously captured a cross section of casual daily life. This work too may have been a sight he himself walked into one day.

Two women hold on to their shaking boat after being hit by ogata-bune, a classic low barge style boat. The woman in that boat might be saying “Oops, sorry!” While simply that motif alone would be adequate, the appeal of Kuniyoshi’s print does not end there. If you look well, you can see a crab peeping into the scene from a gap in the bamboo fence surrounding the pine tree.

With Kuniyoshi’s great observational power, nothing is overlooked and the many details within a single work are staggering.

Other Articles by Toshihiko Isao:

A Visit to the Atelier | Utagawa Kuniyoshi: The Ukiyo-e Artist You Should Know