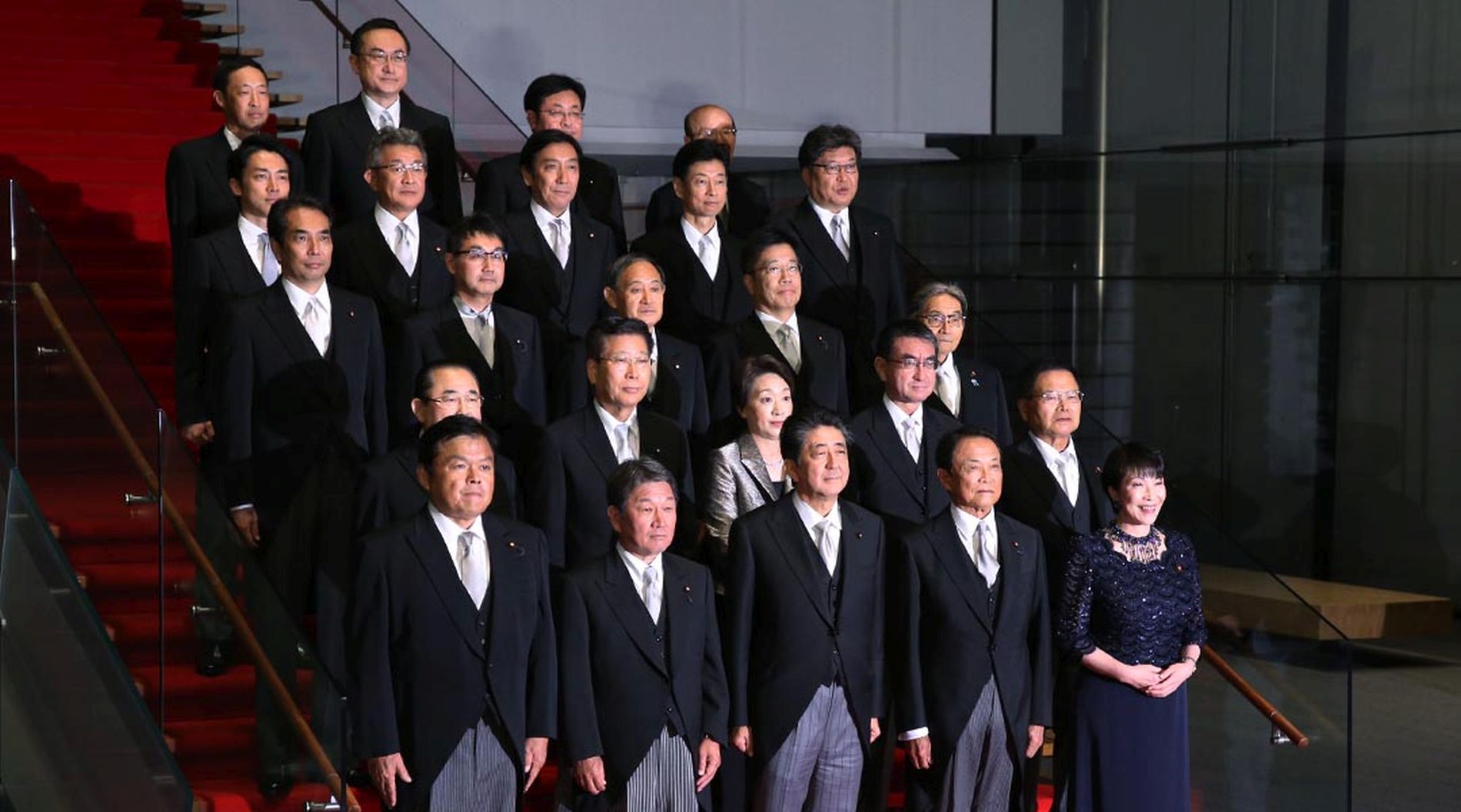 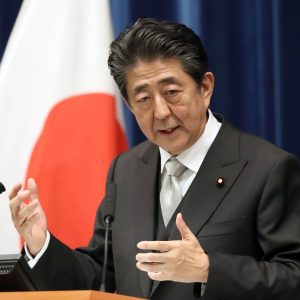 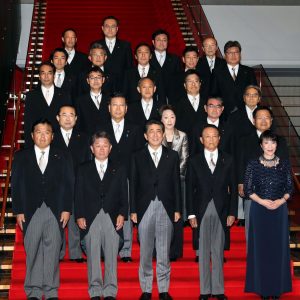 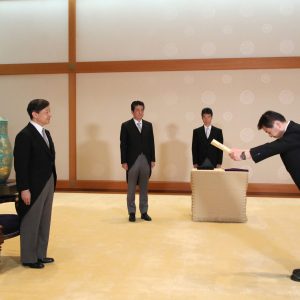 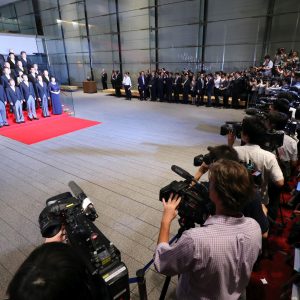 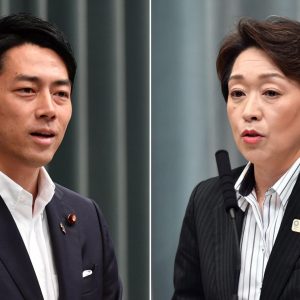 A wholesale reshuffle of Japanese Prime Minister Shinzo Abe’s Cabinet, announced on September 11, produced a lineup made up of staunch Abe allies and numerous fresh faces.

Of the 19 Cabinet members, 17 are new to their post, with 13 of those holding a Cabinet position for the first time. The only members staying in place are Deputy Prime Minister and Minister of Finance Taro Aso and Chief Cabinet Secretary Yoshihide Suga.

Cabinet members often hold multiple portfolios. While on the one hand several of the new Cabinet ministers, including Minister of Education Koichi Hagiuda, are dyed-in-the-wool Abe supporters, several others are not widely known outside of Japanese political circles. The watchwords for this — the fourth Abe Cabinet — are “stability and challenge.”

But what will be the goals of the new government?

Soon to become the longest serving prime minister in Japanese history, Abe obviously realizes he is on the last lap of his political career. That being so, he has identified several unfinished political goals he would dearly love to accomplish while in office.

That is clear from the new personnel lineup for Cabinet and Liberal Democratic Party (LDP) senior party positions.

At the top of the agenda is Abe’s long-cherished but much-frustrated goal of revising Japan’s Constitution. He is placing fellow advocates of such reform in key positions around him so as to “stabilize” the base of his administration.

Another prime goal is to enlist members of various LDP factions into his government as a “Cabinet of rivals.” Here the aim seems to be to “challenge” and groom them through competition for the post-Abe era.

Before the Cabinet reshuffle, both Aso and Suga made statements to that effect that the entire party needs to be oriented towards the goal of constitutional revision, since it wouldn’t do for the Prime Minister alone to be all fired up about the cause.

Abe has reportedly been adamant in seeking agreement on that point, especially when choosing the LDP secretary general (Toshihiro Nikai) and chairman of the party’s Policy Affairs Research Council (Fumio Kishida).

Singing from the same song sheet at the September 11 press conference when they assumed office, both Nikai and Kishida emphasized that they were all for constitutional revision.

Another indication that Abe is determined to get the LDP behind his reform proposals is the fact that he appointed former Minister of Economy, Industry and Trade Hiroshige Seko, a close associate, as the party chair in the House of Councillors.

The new Cabinet is also full of politicians who share Abe’s political principles and support his policies. These include Sanae Takaichi (Minister of Internal Affairs), Katsunobu Kato (Minister of Health, Labor and Welfare), Seiichi Eto (Minister of State for Consumer Affairs and Food Safety), and Koichi Hagiuda (Education Minister).

Abe obviously wants to tighten up the ranks and not allow any daylight between his own positions and those of Cabinet members.

On the foreign affairs front, Abe faces several thorny issues, including the abduction of Japanese citizens by North Korea and the conclusion of a peace treaty with Russia contingent upon settlement of the Northern Territories issue. But these involve major uncontrollable factors since other nations are concerned.

Constitutional revision, on the other hand, is purely a domestic issue. So if Abe and the LDP have the necessary resolve, then the final decision will be up to the Japanese public.

The new Cabinet also includes likely future leaders for the post-Abe era. That was not by coincidence, as Abe noted on the evening of September 10.

“I tried to tap the hopefuls, the leading candidates from each of the [LDP] factions,” he said. “I want them to engage in friendly competition.”

For example, Hagiuda as well as Yasutoshi Nishimura (Minister for Economic and Fiscal Policy) are from the faction led by Hiroyuki Hosoda. Foreign Minister Toshimitsu Motegi and Katsunobu Kato, on the other hand, come from the Takeshita (Fukushiro Nukaga) faction. Such politicians are likely to become leaders of their respective factions in the future, so Abe seems pleased to see them contend with each other while under his wing.

Another post-Abe leadership candidate is former Foreign Minister Taro Kono of the Aso faction, who was handed a lateral reassignment to head up the Ministry of Defense in the new Cabinet. His mettle will be severely tested there as he will be responsible for several complex issues, including the relocation of the United States Marine Corps Air Station Futenma in Ginowan City to Henoko in Nago City, Okinawa.

Fumio Kishida is another strong candidate for leader in the post-Abe era, and the Kishida faction strongly lobbied beforehand to have faction members Naokazu Takemoto (Information Technology Policy Minister) and Seigo Kitamura (Minister of State for Regional Revitalization) join the new Cabinet. It is believed that Abe went along with the idea because in the recent Upper House election four members of the Kishida faction lost, which weakened Kishida’s unifying force within the faction.

Much attention has been given to the naming of Shinichiro Koizumi, the popular son of former prime minister Junichiro Koizumi, to the new Cabinet. Koizumi is both articulate and a rising star in Japanese politics. Since Koizumi supported the abortive challenge to Abe by Shigeru Ishiba in the 2018 election for LDP president, Koizumi’s appointment might be considered as poaching from Ishiba’s following.

Rui Abiru is an editorial writer and political section editing committee member of the Sankei Shimbun.