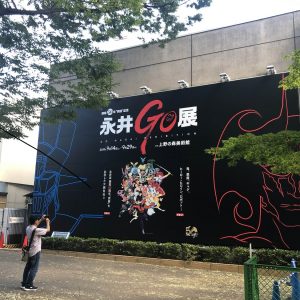 What fan of manga artist Go Nagai would want to miss a look-back on half-a-century of the famed artist’s manga and anime works, such as the Devilman and Mazinger Z series?

The Ueno Royal Museum in Ueno Park, Tokyo, knew the answer, and so it is housing the “50 Years of Go Nagai” exhibition until September 29.

“I have made a strenuous effort for drawing manga for the past 50 years, devoted to stand out as a manga artist,” Nagai, 74, said during an invitation-only preview on Friday, September 13, the day before the official opening of the exhibit to the public.

“It’s indeed a pleasure and joy for me to welcome many people who appreciate these in any way on this occasion,” the artist said.

On display in the Go Nagai retrospective exhibition are more than 600 items ranging from his debut work to the latest ones. They include autographed manuscripts, color illustrations and sketches, as well as works that have been released for the first time to mark the Tokyo exhibition.

Also on exhibit is the medal of Chevalier (Knight) of the Order of Arts and Letters, which the French government awarded Nagai in July in recognition of his cultural accomplishments.

There was a time in the early years of his comics career when Nagai’s hit works, such as Harenchi Gakuen (Shameless School), aroused an uproar among the public because of elements of eroticism felt radical in those days. Looking back on the past, Nagai noted, “Well, I guess time has changed to where people have now deemed those of my works as cute and lovable, rather than radical.”

He added: “Being radical is just my style, you know? And I’d like to continue making efforts in pursuit of radical characteristics of my pieces.”

Gravia idol Kanami Takasaki, 22, appeared at the preview event. She was one of the three first grand prize winners in the 2018 “Sanspo GoGo Queen Grand Prix” Beauty Audition under the sponsorship of The Sankei Sports (Sanspo) newspaper.

Dressed in a costume of the android heroine in Cutie Honey, another major hit of the prolific manga artist, she called out, “Honey Flash!” — magic words Cutie Honey utters in transformation sequences in the manga — in celebration of the exhibition.

Other manga artists — legends on their own — appeared at the preview, such as Fujio Fujiko, Takao Saito, and Tetsuya Chiba. They looked intently at the original drawings and other works by Nagai, along with other invitees.

Also taking part in the preview were Yoko Maekawa, who sang the theme song for the anime version of Cutie Honey, and Mika Kano, a multi-talented actress and TV personality.

Kano, as Nagai’s close friend, once did a cosplay as one of the characters in Nagai’s manga stories. She said: “There are items here that I didn’t know before, and I think every one of the exhibits is superbly beautiful. So I feel like recommending everybody to visit this exhibition without fail.”

The outer wall of the Ueno Royal Museum displays a gigantic signboard about six meters long and about 12 meters wide, with the widely known characters in Mazinger Z, Devilman, and other Nagai manga works. Some fans of Nagai were seen taking commemorative photos in front of the signboard on the preview day.

The exhibition runs through September 29.

For more information, visit the website of the exhibition’s executive committee.