After Covering Up the Coronavirus Outbreak, China Scouts for International Praise 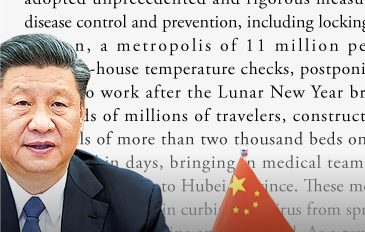 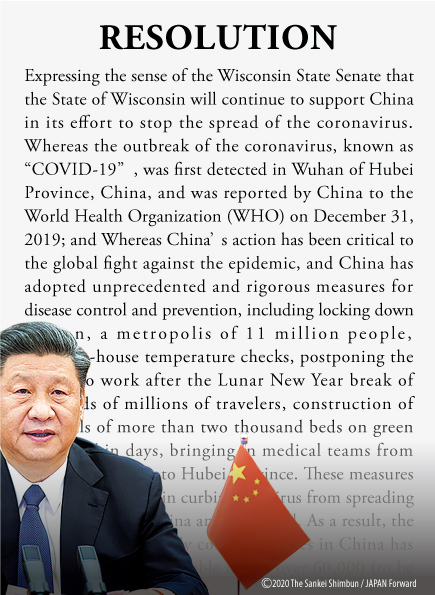 Have you heard about the fake “draft resolution” of the State Senate of Wisconsin, a state in the Great Lakes region of the United States? I am calling this proposed resolution a fake because it was cunningly written by Chinese authorities. At best, it could be called a draft, but stated plainly it is a fraud.

This draft resolution contains a message of support for China’s efforts to curb the spread of the novel coronavirus, and a statement urging the U.S. government to cooperate with the World Health Organization. The resolution’s sentiments are the polar opposite of the Trump administration’s position. It is written as if the state senate was praising China and pressuring the U.S. government to cooperate with the pro-China WHO.

Attached to an email, the draft resolution was sent by the Chinese Consul General in Chicago to Wisconsin State Senate President Roger Roth. Its sender, the consul general, was making an explicit request that the state senate adopt a “resolution expressing solidarity with the Chinese people in fighting the coronavirus.”

China was asking a third party to rewrite an evaluation of its performance in an attempt to draw attention away from any responsibility for the outbreak of the Wuhan virus.

According to a report by Jamil Anderlini of the U.K. Financial Times, State Senate President Ross was at first doubtful that a foreign power would blatantly meddle in local legislative affairs, then angered, and finally appalled.

The response he sent upon receiving the draft resolution was allegedly, “Dear Consul General, NUTS.”

Since its failed cover-up of the coronavirus, China’s attempts to regain power have rather been like China digging its own grave. With seemingly little care for its reputation, it is conceivable that China could have made similar requests of other states, not just Wisconsin.

Meanwhile, the Midwestern state of Missouri has filed a claim for damages in a federal court, asserting China lied to the world and did not do enough to control the spread of the virus. It seems that China is suffering some retaliation against its propaganda efforts targeting localities in the U.S.

Moreover, as exposed in the April 3 edition of this column “Comprehending the World,” we have seen China rewrite accounts of the past and feign ignorance of the facts.

My previous column accused the Chinese of using the term “Wuhan virus,” now so detested by Chinese leadership, on the English site of the state-run Xinhua News Agency on January 22, and noted that the first use of the term was sanctioned by Beijing. It is strange that they later flew into a rage, calling its usage by U.S. Secretary of State Pompeo “racist.” (RELATED READ: Why Protest, China? The Term ‘Wuhan Virus’ Came from Beijing, Not Elsewhere)

China calling the United States “racist” was an attempt to arouse its rival’s sense of remorse and paralyze it, thereby silencing further inconvenient criticism. China has used the term “resurgence of militarism” to describe Japan in a similar way, with political intentions hidden behind its words.

Yet, the accusation is inconsistent with the Chinese using the term “Wuhan virus” themselves. Right around the time I pointed this out in my column of April 3, the headline “Wuhan virus” was removed from the Xinhua News site. It all makes sense to me now — this is how China has always gone about rewriting history.

The Chinese Communist Party is overly dependent on its self-serving propaganda campaign, which is proving to be counterproductive. First, any normal country would express regret at dispersing a deadly virus into the world. Second, it would provide detailed data on the virus to the international community, earning its sympathy and respect ー and, of course, fully prepare itself for regime change.

One of the unfortunate aspects of totalitarianism is that preserving the power establishment is the priority, tending heavily towards coverups and external propaganda. When coverups fail, it turns to counterarguments, just as China pushed out a conspiracy theory about the U.S. military releasing the virus.

Now China is trying to mobilize embassies and consulates scattered across the globe in a campaign to aggrandize the superiority of its system of dictatorship.

Upon witnessing an outbreak of the plague in Florence in the 16th century, Machiavelli — political theorist and author of The Prince — called the outbreak a “direct result of misrule.” With this current outbreak, the mistakes of the Xi Jinping administration have recalled the same lesson, and intensified movements to dismantle the international supply chain.

On the topic of worsening relations between the United States and China, distinguished professor and political scientist Wang Jisi of Peking University stated that economic and technological decoupling is “already irreversible.” The United States is dependent on China for a large portion of components for its pharmaceuticals. Yet Congress has introduced a bill, supported by both Republicans and Democrats, to encourage increased domestic production of pharmaceuticals.

Be Prepared for Higher Costs

Once viewing China only as a huge market, the Europeans not only caught the virus from China, but were also sent faulty medical equipment, for which they found it necessary to further endure China’s seemingly unapologetic and condescending attitude. Moreover, as they struggled with the pandemic, Europeans realized that Chinese companies were using the opportunity to try to acquire European companies in cutting-edge technologies, such as semiconductors, further stirring their rage.

France’s President Emmanuel Macron has made his own list of goods to convert from French reliance on China to domestic production. And British Cabinet members have called for reconsideration of Chinese telecommunications giant Huawei’s involvement in the UK’s 5G mobile communications network.

Prime Minister Shinzo Abe has taken the issue a step further. After the March 5 announcement that President Xi Jinping’s official visit to Japan was postponed, Abe launched an effort to restructure Japan’s supply chain based on emergency economic measures.

In a meeting of the “Council on Investment for the Future” chaired by the Prime Minister, Abe vowed to provide support for companies that diversify production, encouraging them to bring back the manufacturing of products with high added value to Japan, and move production bases for other items to Southeast Asia.

As Japan, the U.S., and Europe make clear moves to distance themselves from China, Beijing is bracing for impact.

Even before the outbreak of the Wuhan virus, China was struggling to manage its economy with a massive national debt. Severing of the supply chain by Japan, the U.S., and Europe is China’s worst nightmare.

An American think tank has warned of the “pharmaceutical weapons” that China could create by producing contaminated pharmaceuticals. At the same time, if more products are to be produced in the West, consumers must be prepared to accept higher costs.

Which would you choose? The cheap product you are not certain is safe, or the safe but more expensive domestically-produced version?