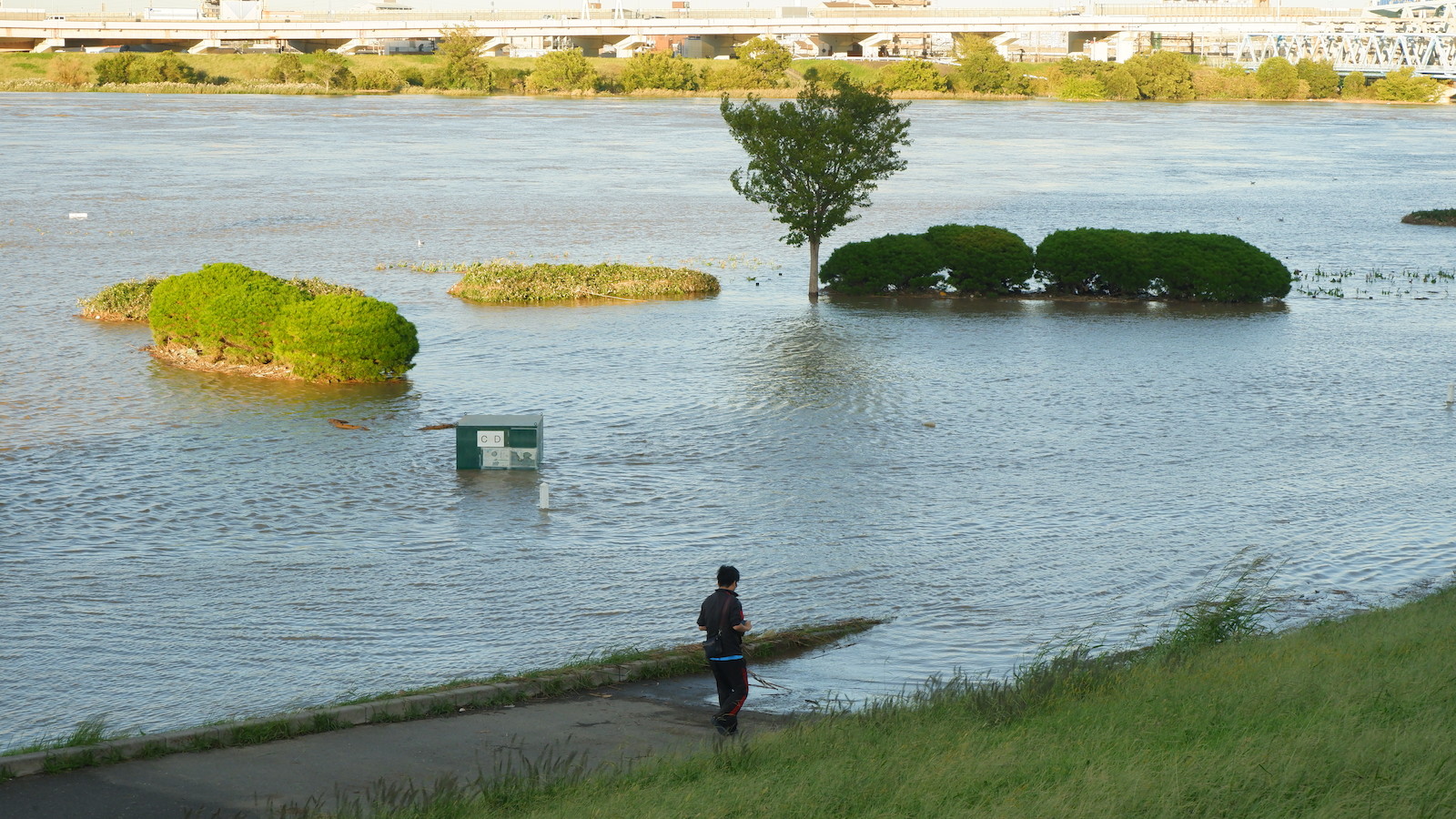 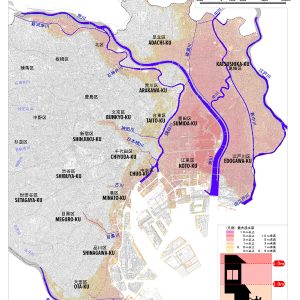 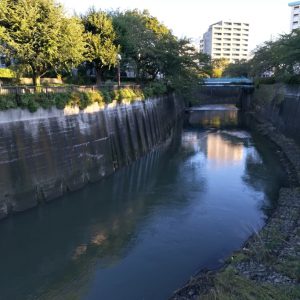 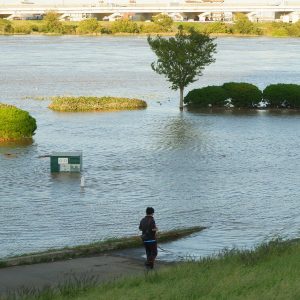 Arakawa Photo 2 – in full flood -cycling path into the floodwaters

The Kanto area, including Tokyo and Yokohama, experienced one of the strongest typhoons on record in mid-October 2019. Foreign press coverage generally gave Japan high marks for preparedness, while at the same time repeatedly giving visual coverage to flooding and its consequences.

At the same time, photos of levees that did not break or areas that were spared were overlooked in most news reports.

However, as someone who lives in an area that was prone to serious flooding until a massive public works project brought the rivers on the east side of Tokyo under control, I want to address an early-20th Century project that is still performing admirably well – the Arakawa Flood Diversion Channel, more commonly called the Arakawa.

It is a 22-km channel that runs through a number of low-lying Tokyo wards, including Kita, Taito, Arakawa, and Adachi, as shown on the map below. It was constructed between 1911 and 1930 in an attempt to control the chronic flooding of low-lying parts of eastern Tokyo, and has done that job admirably well. While there have been minor cases of overflow, the levees have never failed.

Thanks to Dogs and Demons by Alex Kerr (Hill and Wang publishers, 2002), public works projects — especially the damming and channelization of rivers in Japan — has had a singularly bad reputation among foreigners. Despite being two decades out of date in terms of its information on government spending and totally without reference to the threat presented by global warming and climate change, this book is frequently cited by foreigners to document one of the things that is allegedly very wrong with Japan.

To be sure, flood control projects in Japan, as in other countries, especially the United States, have involved wasteful spending and design failures. And they have been a visual blight on the natural environment. Neither element, however, is rigidly inherent in such projects. The Arakawa is proof of this.

Even with trees, channelized rivers in Tokyo, such as the one shown in Photo 1, may not be attractive. Still, the Shakujigawa near Koga in Kita ward is far from being as ugly as some. Presumably, it is examples like this that Alex Kerr and others had in mind when they scored the ugliness of channelized rivers.

The Arakawa is an example of a pattern common in Japan: a relatively small river contained between levees separated by many times the normal width of the river.

Upstream from Tokyo, at its widest point, the bank-to-bank distance is nearly three kilometers, although the river itself is normally only a few hundred meters wide. The extra width is to accommodate storm flow — it is expected to flood, although not every year.

Photos 2 (above) shows the Arakawa in full flood state. My son, who assisted in the photography, is looking toward Kawaguchi on the other side of the river. Usually, the Arakawa is only a few hundred meters bank to bank. But when the flood photographs were taken, it was several kilometers bank to bank. Not only was the water not far from overflowing the levees at some points, but there was a very strong current.

In the case of the Arakawa, in normal times the overflow areas are used for recreational facilities, including picnic and barbecue areas, baseball diamonds, soccer pitches, and golf courses. There is also a cycling course as wide as a city street that is used for marathons.

At several points, the levee on the west side is terraced to provide seating for summer fireworks events. The wide overflow areas provide a safe buffer where misfires can fall.

The “duck pond” in Photo 4 is actually a completely submerged municipal golf course. There are a number of public and private courses on the overflow areas within the Arakawa banks. The municipal golf course shown in the photographs is now visible, but far from usable.

The “river” shown in Photo 6 is actually the cycling and jogging course that runs along the west side of the river. I use this course to go to Kawagoe or Shinrin-koen.

The banks are popular places for people with loud musical instruments to practice. I have seen and heard drummers, saxophonists, and bagpipes. Once near the Iwabuchi Floodgate, I saw a fellow dressed as Count Dracula. He had a large white bird on his shoulder and was practicing card tricks.

While doing follow-up photos one week after the river crested, I noticed a group of Japanese having a picnic and practicing with a small Japanese drum. Before I could ask them for permission to take their picture, one of the group came to me with a smart phone in hand and asked me to take a group picture of them. Not only that, but I was asked to have a go at the drum and pose with them for pictures. 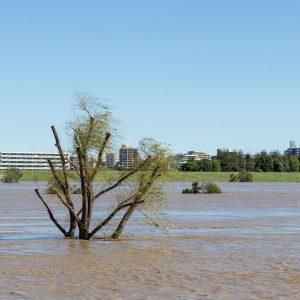 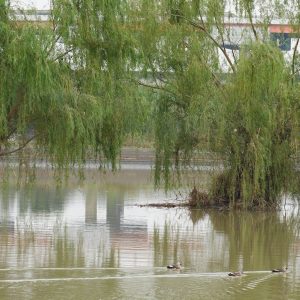 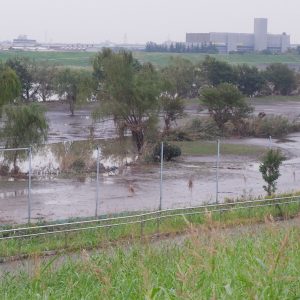 Arakawa Photo 5 – golf course will take a while to recover 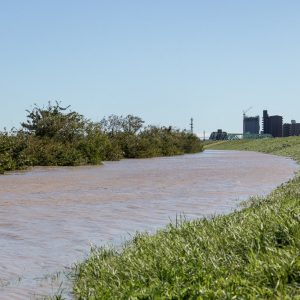 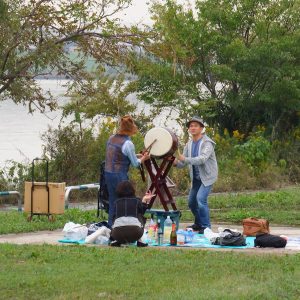 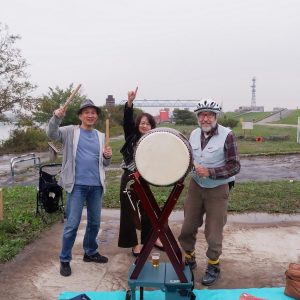 As soon as the river returned to its usual banks, people started using the cycling and jogging course, but as can be seen in Photo 14 (below), there were many patches of slippery mud remaining. When the river was in full flood, only the top meter or so of the trees in the background was above water level.

When it is dry and the weather is warm, the sea of mud in Photo 15 is a particularly popular picnic spot because open fire barbecuing is permitted — something that is severely limited in Tokyo because of the fire hazard.  Various events are also held there. 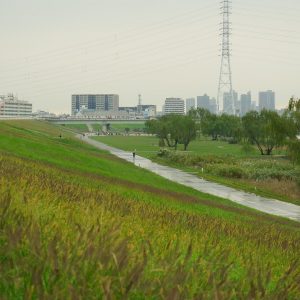 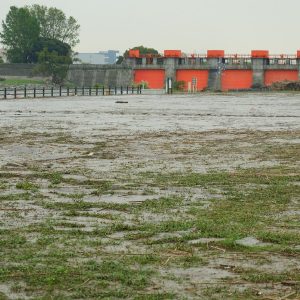 The temporary loss of the many playing fields along the west bank of the Arakawa impacts particularly on middle school and elementary school children in baseball and soccer teams. They are the ones who rent these fields at a rate than can be as low as ¥300 JPY for two hours.

It will probably be some time before kids are playing soccer on the pitch in Photo 9. On weekends, when the fields are in use, cycling is somewhat tedious because you have to watch out for kids (and adults) who chase errant balls across the cycling course adjacent to the fields without looking left or right.

In Photo 10, only the top of the scoreboard of a baseball diamond is above water level.

One week after the river had crested and then returned to its normal level, playing fields like the one in Photo 11 were still a sea of thick, clingy mud with the goals that had not been swept away covered in trash.

Where a portion of a field had dried enough that those using it would not sink to their knees in mud, children and their coaches in Photo 12 made do with even small patches for practice. 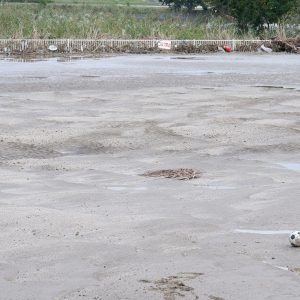 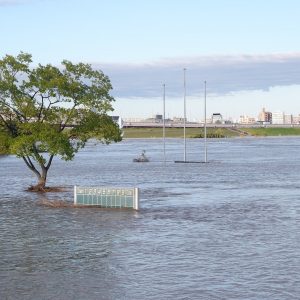 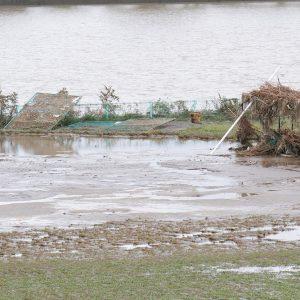 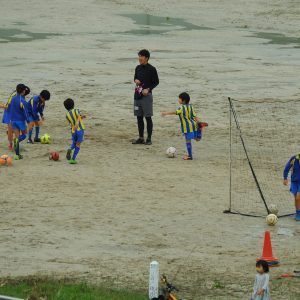 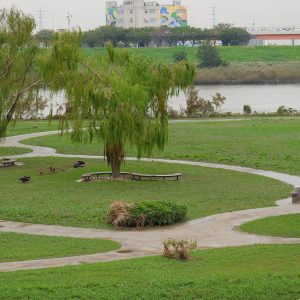 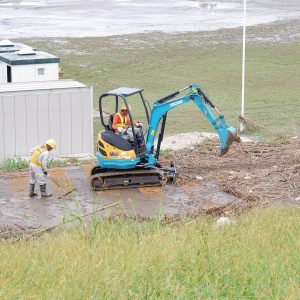 A week after Hagibis, some of the rest areas shown in Photo 13 were usable, although no one was sunbathing on the grass — something to be seen in drier weather. The brownish coloration for the lower half of the leafed portion of trees indicates how high the water was in this area.

As part of the foreign coverage of the Rugby World Cup, Japan has been getting very favorable press for the lack of litter in our cities. To a large extent, this praise is deserved, but unfortunately there are still far too many Japanese who use rivers and their overflow areas to dump trash. I have seen bedding, racing tires, and appliances dumped along the cycling course or in the overflow.

Joining a volunteer group, such as the Arakawa River Clean-aid Forum, is a good way to make Japanese acquaintances. It has an English website. As stated on the website, autumn is their prime season.

The litter deposited by the recent storm run-off is, however, something else again. It is beyond the tongs and plastic refuse bags technology of volunteer groups. Dump trucks and power shovels will be required. When I visited the river a few days after Hagibis, that effort had just begun.

Assessing the Impact of Hagibis

I doubt that there is anyone who has seen the Arakawa in full flood who would continue thinking that there is no or little need for substantial and possibly increasing expenditures on flood control projects. Waste must, of course, be minimized.

What is constructed where and when should be decided by a cost-benefit analysis, rather than whether a particular politician would benefit from pork barrel expenditure in his or her district. Engineers should give more thought to dual use facilities — flood control and recreation — so well exemplified by the Arakawa.

The necessity of expenditure is not open to question. If only a fraction of the dire predictions associated with global warming and climate change come true, flood control efforts will have to increase, even if what is constructed is not always aesthetically pleasing.