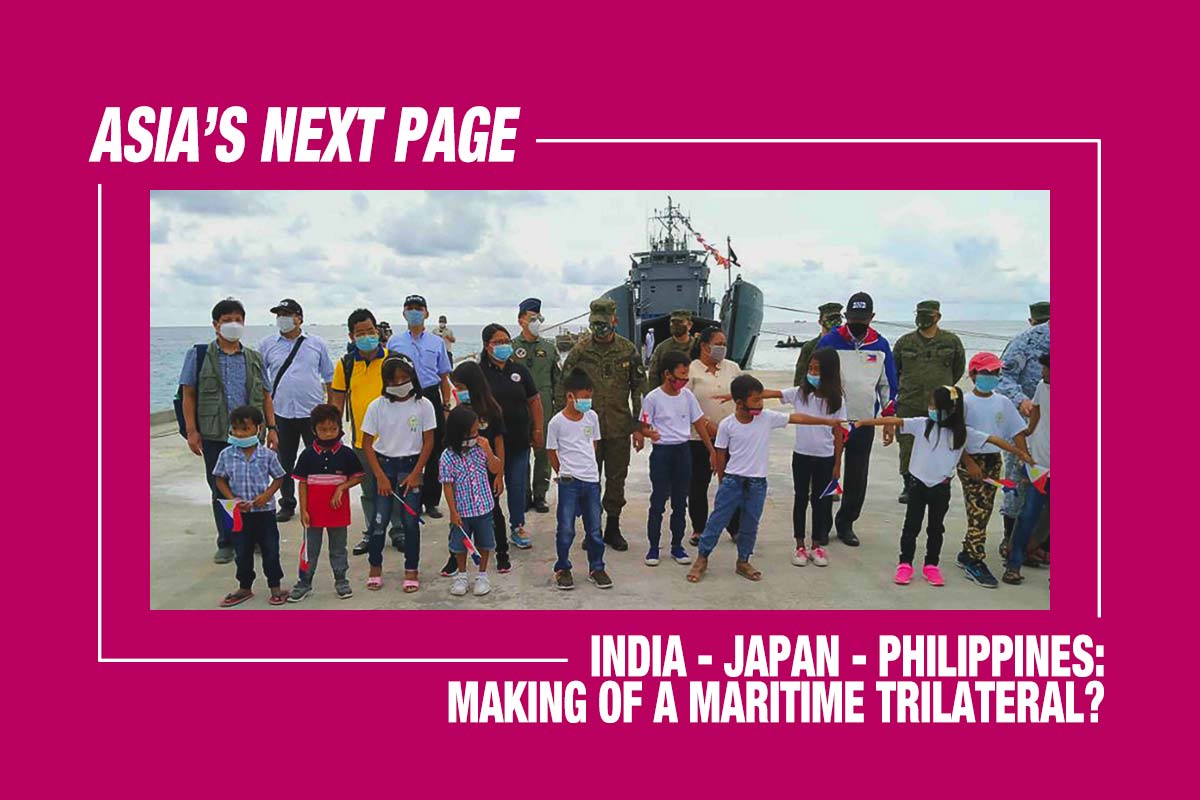 In this handout photo provided by the Department of National Defense PAS, Defense Secretary Delfin Lorenzana, 4th from right, and the other military officials are welcomed by residents wearing masks during a short ceremony at the newly built beach ramp at the Philippine-claimed island of Pag-asa, also known as Thitu, in the disputed South China Sea on June 9, 2020. (Department of National Defense PAS via AP)

Amidst rising great power tensions in the Indo-Pacific, the region is increasingly becoming characterized by multilateralism, including smaller quadrilateral and trilateral groupings.

India and Japan’s defining Special Strategic and Global Partnership, in particular, has emerged as a strong pillar in the region. Their bilateral synergy is complemented by their joint participation in several other regional groupings — like the Quadrilateral Security Dialogue (Quad) with the United States (U.S.) and Australia. Simultaneously, both states prioritize Southeast Asia within their foreign policy outlooks. Beyond Indonesia and Vietnam, the Philippines is seen as a key Association of Southeast Asian Nations (ASEAN) state that can offer a crucial strategic partnership in the coming times.

Within such evolving dynamics, can an India-Japan-Philippines (IJP) trilateral be envisioned as an added avenue for building political and diplomatic synergy in the region? Can a potential IJP grouping fill the existing strategic gaps in the Indo-Pacific maritime domain and play a role in keeping China’s growing assertiveness in check?


The Philippines in India and Japan’s Regional Outlook

Recently, China’s growing belligerence vis-à-vis India at their disputed border, and maritime intrusions into the East and South China Seas, have prompted India and Japan to emphasize the global dimension of their natural partnership by jointly working on regional initiatives and jointly engaging with third countries, such as France.

With the Indo-Pacific being predicated on ASEAN-centrality, Southeast Asia has naturally become a focal point. For instance, in a telling move, Japanese Prime Minister Yoshihide Suga chose Indonesia and Vietnam as the destinations for his first trip abroad as head of state. Also, India and Japan are set to hold their second ‘2+2’ meeting of foreign and defense ministers this month.

Further, Suga has announced plans to visit both India and the Philippines — in the midst of the raging COVID-19 pandemic — to reaffirm Tokyo’s cooperation over a free and open Indo-Pacific. Visiting the Philippines alongside India offers an indication of Tokyo’s perception of the Philippines’ importance in solidifying an Indo-Pacific framework.

For India, the Philippines has recently emerged as a critical variable within its largely ASEAN-focused Act East Policy (AEP), with a shift towards ‘pointed alignment’ Indo-Pacific strategy. Until now, India-Philippines bilateral ties remained neglected and were drawn primarily under the aegis of ASEAN. Even so, they were secondary to India’s robust relationships with ASEAN states like Vietnam and Singapore. Yet, India and the Philippines share several commonalities, like anti-colonial values, strong democratic republics, independent press, and commitment to South-South cooperation. All of these can be built on to improve mutual understanding, elevate ties and thereby instigate a deeper, strategic relationship.

Now, India is making fast advances in bilateral ties with the Philippines. Its proposed preferential trade agreement (PTA) with Manila aims to build long-term trade ties and extend the bilateral relationship. The third-biggest ASEAN economy by GDP, the Philippines will perhaps be the first country that the Modi government arranges such a trade pact with. The PTA will improve market access and open promising opportunities for more prominent goods and services exchanges.

Since refusing to sign the Regional Economic Partnership Agreement (RCEP) pact, India is increasingly looking to incorporate itself with ASEAN’s supply chain networks and trade infrastructure. The Philippines comes as a natural choice here. The PTA aims to put in place an economic accord that can boost thus far muted trade ties between the two states.

In a virtual India-Philippines Infrastructure Cooperation conference organized by the Embassy of India in Manila, together with the Philippine Chamber of Commerce and Industry and the Confederation of Indian Industry, discussions highlighted that the PTA would accentuate India’s AEP while reducing China’s influence in the region.

Tokyo already shares Economic Partnership Agreements (EPA) with both the Philippines and India. With the added dimension of an India-Philippines PTA, India, Japan, and the Philippines can create the groundwork for a strong economic framework between them.

Philippines’ infrastructure development needs are immense, especially as the country is looking to become an upper-middle-income state. An India-Philippines PTA, alongside the Japan-Philippines EPA, would improve market access and encourage Japanese and Indian entities to consider venture opportunities with the BBB. In turn, this can help India and Japan strengthen their ASEAN outreach while fulfilling Philippines’ infrastructure needs, and thus take forward their Indo-Pacific strategies.

Japan’s aid to the Philippines in the infrastructure sector has been consistent and immense, furthering both the free and open Indo-Pacific initiative (FOIP) and the EPQI. The most ambitious infrastructure project — a subway line in the capitol — is being modeled on Tokyo’s underground network. The Japan International Cooperation Agency (JICA) gave $936 million USD in loans for the main phase of this Metro Manila Subway project and construction costs are supported by three other significant Japanese entities, making it the most expensive within the BBB. Further, Japan’s Sumitomo Mitsui Construction is building the Manila North-South railway project, expected to be operational by 2025, which involves a total loan of $1.53 billion USD from the Japanese government.

Indian organizations, like the Adani Group, GMR, L&T and IRCON among others, are already exploring investment opportunities in areas like rail routes, air terminals, shipbuilding, ports and metropolitan framework in the Philippines. Meanwhile, the Philippines is set to band together with India to drive development in its financial technology and banking sectors and thus sustain its digital growth momentum.

Philippines Department of Finance Secretary Carlos Dominguez III announced that he has been in talks with the Indian Ambassador to the Philippines, Shambhu Kumaran, to fortify the two nations’ cooperation on digital connectivity infrastructure. India, too, is keen to contribute to President Duterte’s objective of achieving monetary inclusivity for Filipinos, and at least a discussion to this effect has been started.


A Maritime Trilateral in the Indo-Pacific?

Importantly, the India-Japan-Philippines trilateral would be drawn on strengthening the FOIP narrative. Under a proposed trilateral framework, the Philippines can engage more deeply with the emerging Indo-Pacific initiatives — like the Australia- Japan- India-led Supply Chain Resilience Initiative (SCRI). For the Philippines, this can help it correct its logistics services shortcomings like transportation and competitive pricing while raising its economic profile. In other words, it can help Manila be better integrated with regional and global supply chains.

On the other hand, the Philippines has one of the world’s fastest-growing GDP and is home to diverse manufacturing industries, ranging from chemicals to electronics to paper. It is therefore a valuable contributor to global supply chains, and as an SCRI member, it can be instrumental in forging alternate value chains. The trilateral can thus offer India and Japan an avenue for attracting the Philippines to geopolitical mechanisms that are taking shape in the Indo-Pacific.

Additionally, considering their shared imperative of limiting China’s maritime influence, such a trilateral would naturally focus on strategies to at least check China’s maritime assertiveness.

As claimant states in the South China Sea (SCS) dispute, China and the Philippines share conflicting claims over the Spratly Islands and Scarborough Shoal. Although the Permanent Court of Arbitration (PCA) at The Hague unanimously ruled the dispute in the Philippines’ favor based on the UN Convention on the Law of the Sea in 2016, Manila essentially ignored the ruling as it sought to forge closer ties with China while “separating” from the U.S. In fact, as a clear sign of increasing synergy, both the Philippines and China went ahead and pursued several joint development agreements in the SCS. Such a conciliatory approach was borne from Duterte’s desire to capitalize on China’s growing economy and attract increasing the Chinese investments.

Over the past couple of years, however, there has been a gradual shift in this policy, with Manila taking a tougher stance on its SCS dispute with China. For instance, Duterte stated that the Philippines’ position on the SCS was “clear and firm”, and criticized China for not recognizing the PCA ruling at the 2020 UN General Assembly. Most recently, on April 6, 2021, in perhaps one of its strongest statements yet, the Duterte administration called out China for “territorial incursions by hundreds of its vessels”, warning that this could lead to “unwanted hostilities”.

Strengthening the Region’s Rules Based Order

In light of such a shifting perception in Manila, India and Japan’s outreach to the Philippines becomes more salient. It is vital that they come together to capitalize on the changing dynamics between the Philippines and China to engage in a strategic axis that can draw Manila closer to the Indo-Pacific construct and strengthen rules-based order in the region.

Such an approach would complement America’s renewed focus on the Philippines under President Joe Biden. In the maritime synergy domain, the navies of India, Japan, Philippines and the U.S. in 2019 participated in their first joint naval exercise in the South China Sea. More recently, the U.S. and the Philippines have kicked off two weeks of military drills to solidify their defense alliance. Building further on such maritime defense synergy and making maritime exercises like the 2019 “group sail” an annual affair should be considered.

Here too, infrastructure cooperation can be key. Currently, the Philippines depends extensively on aid and infrastructure financing from China. If India and Japan jointly fill this gap, Manila may be more willing to challenge China’s maritime aggression and emerge as a pillar for a rules-based order in the Indo-Pacific. Japan and India can further distinguish themselves as infrastructure partners by offering capacity-building assistance.

Therefore, with immense potential for engaging in specific infrastructural, digital, financial and geopolitical collaboration, an India-Japan-Philippines triangle can be a pivotal development. It offers distinct advantages for all three states while offering them a vital avenue to forge a broader Indo-Pacific connection beyond the Quad, and invest in a grouping driven by shared values and interests.

In other words, the India-Japan-Philippines trilateral grouping can emerge as a pathway to alleviate their pandemic-induced security and economic strains. More vitally, the trilateral can be a mode of three-way dialogue between New Delhi, Tokyo and Manila, thereby elevating synergy and opening doors for the Philippines’ increased participation in other emerging frameworks — such a ‘Quad Plus’.

Dr. Jagannath Panda is a Research Fellow and Centre Coordinator for East Asia at the Manohar Parrikar Institute for Defence Studies and Analyses, New Delhi. Dr. Panda is the Series Editor for “Routledge Studies on Think Asia”. His articles for JAPAN Forward can be found here.