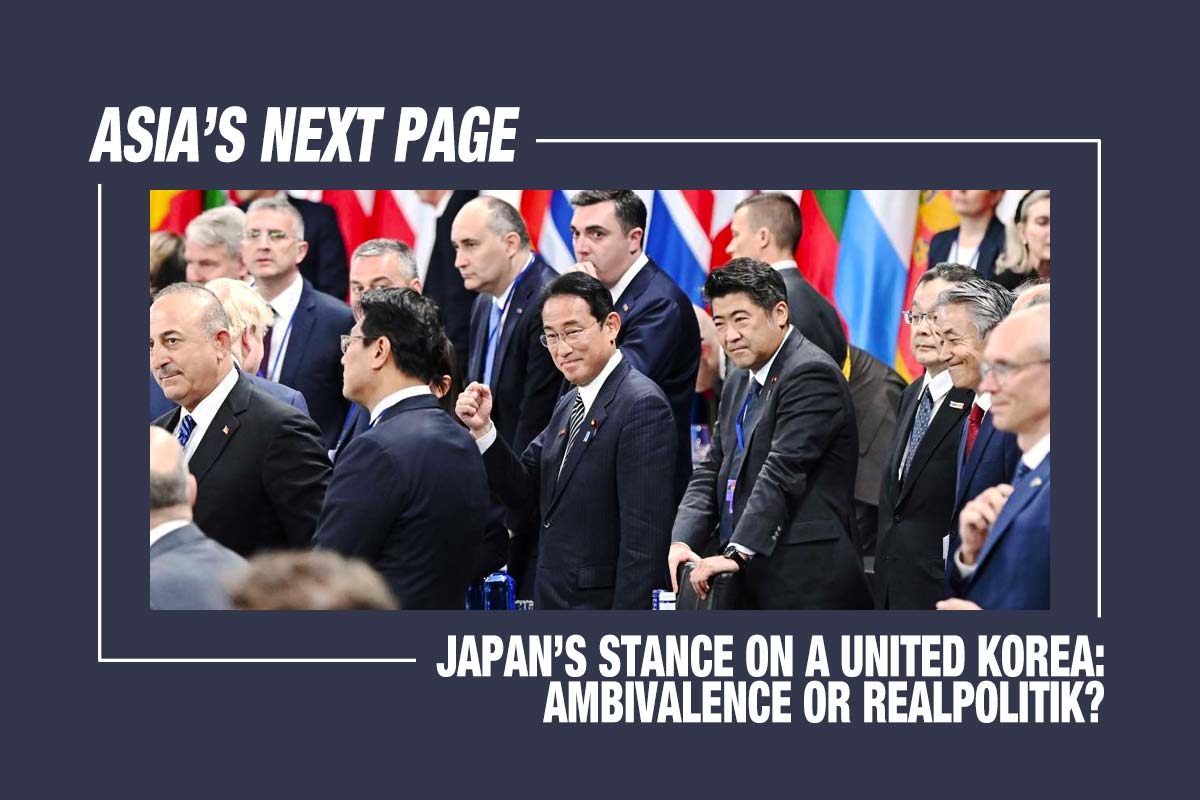 Northeast Asia is at a critical juncture amid the gross uncertainty and chaos brought upon by geopolitical forces not just in the region but globally too.

A wide range of factors have resulted in increasing the threat levels in the region.

To make matters worse, in mid-2022 the United Nations Security Council (UNSC) failed to adopt additional sanctions against North Korea due to vetoes by both Russia and China after Pyongyang fired a slew of ballistic missiles, breaking its self-imposed moratorium on testing banned intercontinental ballistic missiles.

However, two other neighbors, Japan and South Korea regretted the Council’s split vote and stated that such actions not only threaten peace and security, but undermine the foundation of the global non-proliferation regime. This unanimous stand against North Korea by two historically antagonistic states belies the tenuous ties between them.

The election of a new government in South Korea and Yoon’s subsequent early rhetoric have rekindled hopes of normalization of ties with Japan. Moreover, North Korea’s continuing nuclear build-up has hastened the denuclearization debate – and ignited the ever-present hope in the Korean Peninsula of a unification.

From the Japanese perspective, how far is “United Korea” a viable option? What is the flip side for Japan, and would be its diplomatic stance?

Japan officially supports full implementation of the relevant UNSC resolutions for maintaining peace and stability in the Korean Peninsula. It says it is “coordinating closely with the United States and the Republic of Korea (ROK) and cooperating with the international community, including China and Russia.”

There is no overt mention of Korean unification in Japan’s diplomatic speak, though. Tokyo follows separate policies for the North and the South.

Japan stresses reconfiguration of normal relations with South Korea despite historical tensions. The issues of compensation for wartime Korean laborers during the Japanese occupation and comfort women both continue to plague the ties. As per Japan, the 1965 treaty settled all compensation issues. And the 2015 South Korea-Japan agreement that was effectively shelved by Seoul is considered “finally and irreversibly” resolved by Japan.

Their historical conflict also spilled over to the economic arena in 2019 (the ongoing “white list” dispute) and has strained the bilateral General Security of Military Information Agreement (GSOMIA).

Both states are treaty allies of the US and participants in leading international forums, the latest as observers to the North Atlantic Treaty Organization’s Madrid summit. Ideally they should be spearheading multilateral cooperation in the region (a severe lacuna) rather than exacerbating past tensions. They share complicated ties with their two nuclear neighbors, China – a mixed bag global challenge, and North Korea – an unpredictable, immediate regional threat. Yet the prospects for cooperation have been fragile.

Under former South Korean President Moon Jae In and Japanese Prime Minister Shinzo Abe, the relations reached their nadir. Yoon’s embrace of the US-led Indo-Pacific security architecture (the free and open Indo-Pacific vision is the cornerstone of Japan’s foreign policy) and his stress on normalizing relations, along with the US push for trilateral cooperation, have instilled hope.

Kishida, who is energizing Japan’s global policy outlook, is looking to revitalize the fledgling diplomatic and security ties in the region. He has highlighted restoring good bilateral relations with South Korea as an urgent need.

With North Korea, the absence of diplomatic relations, its ongoing military aggression, and the issue of the abduction of Japanese citizens have ensured a hard-line posture from Tokyo. Bilateral outreach is limited on the broader concerns, such as complete, verifiable, and irreversible denuclearization (CVID), and access to United Nations-sanctioned humanitarian relief.

Japan has expressed its intent to comprehensively resolve the bilateral issues with North Korea, including the “unfortunate past,” in line with the Pyongyang Declaration signed between former Japanese Prime Minister Junichiro Koizumi and then North Korean leader Kim Jong-il. The 2002 agreement’s primary objective was the normalization of ties.

Fifteen years later when Moon Jae In was signaling South Korea’s shift to dialogue with the North, Prime Minister Abe, who was Koizumi’s deputy chief cabinet secretary in 2002, was following the hypothesis that “maximum pressure” against an isolated North Korea works best for Japan.

Kishida, like Abe, does not lean on the softer tactics. And in a departure from the past leaders, he has openly declared Japan’s plans to strengthen security cooperation with “like-minded” countries.

Meanwhile, he has set out a new National Security Strategy to reinforce Japan’s defense capabilities and increase the defense budget substantially. At the same time, he is pushing for complete denuclearization of North Korea while working with the US, South Korea, United Nations, and the international community at large to realize the aim.

This is important in light of the Russia-China-North Korea collusion. North Korea is being leveraged as a pawn in the larger geopolitics while Moscow and Beijing provide Kim’s regime strategic protection. The renewal of the China-North Korea friendship treaty, too, showcases a n intimacy in the Kim-Xi relationship.

Hence for Kishida, working on strengthening US and South Korean ties to deter North Korean aggression emerges as an absolute necessity, which Yoon echoes.

Amid such dynamics, the question of a United Korea demands revisitation, especially as any changes in the Northeast Asia security architecture would directly impact Japanese interests.

Moreover, it is important for Japan to build a more cohesive Korean Peninsula policy beyond its bilateral engagements with Seoul and Pyongyang. Such a policy should make room for potential change in the regime in North Korea, or a North-South unification in the future, with different visions of what that might look like.

Here, an ideal outlook would be the Kim regime’s decision to denuclearize and build greater openness. That could lead to improved inter-Korean ties over time, and more exchanges with Japan and the United States, while Seoul and Tokyo work on resolving their antagonistic history.

Such developments would synergize closer ties between Japan and the two Koreas, ultimately building Tokyo’s ties with the Peninsula on a better footing.

However, the chances of such North Korean denuclearization, which would spearhead this vision, are extremely low.

As much as Moon Jae In’s resolute attempt at Korean unification ー what some call his preoccupation with leaving a lasting legacy ー deserves to be lauded, its failure has also weakened the very same vision. The election of the hawkish Yoon has sundered any hopes of a nuanced North-South detente, especially one in which North Korea will gain even a semblance of an advantage.

Under the present circumstances, there are two foremost possibilities for unification:

The workability, or even an intent for a drawn out dialogue process appears remote. Adding China, Russia, the United States, and Japan to the mix only complicates the already illusionary goal. None would be willing to cede any hold on power.

This is particularly true in the current scenario. Pyongyang, with a China advantage, would not subscribe to a South-led unification. And a North-led process would certainly be tilted to Beijing’s game plan, and hence unacceptable to the United States, South Korea, and Japan.

A question that looms large is: Would a non-partisan or neutral United Korea choose a democratic setup? Given that South Korea is a blossoming democracy and the other an impoverished state, the answer should be self-evident. However, it would still depend on the circumstances of the unification.

For Japan, in the event of a united Korea, the age-old hostilities would not disappear but might be reasserted with a renewed fervor. In particular, Japan would be fearful of China leveraging a unified Korea’s historical animosities, which complement Beijing’s own construction of victimhood against Japan, to create instability. This would be an unsuitable outcome for Japan, which is starting to reposition and assert itself geopolitically as a global entity.

Nonetheless, as long as United States troops are stationed in Japan and the Seventh Fleet remains in the Pacific, the US military will be predominant in the region. A unified Korea aligned with the US is therefore a best-case scenario for Japan.

Notably, a unified Korea may very well be enticed to retain the North’s nuclear weapons. After all, it would still be in the middle of the great power competition. Japan would need to be mindful of such aspects while framing its Korean Peninsula policy, even as it is still trying to revise its postwar constitution to match the current times.

Ideally, notwithstanding potentially dire scenarios and unexpected repercussions, and however distant the eventual possibility of reunification, a peace process that mandates the will of the Korean people must not be relinquished.