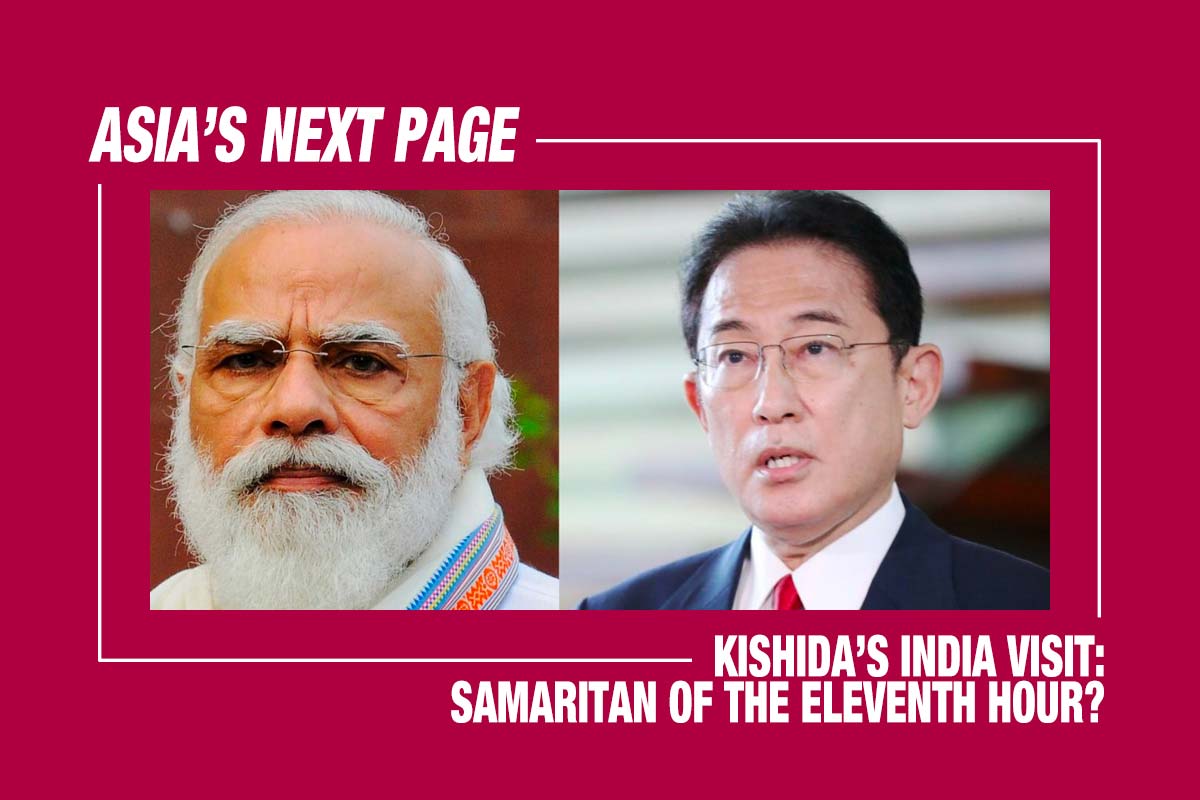 First of a two part series on Prime Minister Fumio Kishida’s travel to India and Cambodia in March 2022.
(Read Part 2: [Asia’s Next Page] Kishida in Cambodia: Seeking Regional Consensus Amid the China Threat?)

The India-Japan “Special Strategic and Global Partnership” has stood strong through the turbulent times, and only grown stronger in face of an uncertain security environment.

Both countries share a history bereft of any disputes. They also rank as two of Asia’s largest economies and major rising powers, which has given them an opening to form a deep-rooted, synergetic and successful partnership. Such a partnership has been shaped, at least in part, by the personal camaraderie between Indian Prime Minister Narendra Modi and former Japanese Prime Minister Shinzo Abe, both of whom built on bilateral relations to form a robust and comprehensive relationship for the new era.

Now, under the recently-elected Prime Minister Fumio Kishida – who served as Abe’s foreign minister – India-Japan synergy and cooperation in third countries (including in Southeast Asia) is steadily expanding. The upcoming state visit by Kishida to New Delhi (subject to pandemic conditions) is testament to the importance and focus both states accord each other.

At the same time however, the visit also comes at a time of great tensions and rift in the international order amid the Ukraine crisis. On this matter, India and Japan have adopted differing positions: while Japan has strongly condemned the Russian invasion, India has taken a more cautious approach considering its distinct ties with Moscow.

More importantly, does the visit signal a resolve on Tokyo’s part to address emergent issues that could prove to be a point of division between the two countries in the coming times?


India on Ukraine and Within Quad: Critical Variables

Notably, India and China are two of the major global voices that have refrained from explicitly condemning Russia’s military assault on Ukraine. While Beijing’s “strategic silence” and implicit support of Russia comes from their shared critical stance on the West, India’s “silent diplomacy” comes as a deft attempt to balance a critical strategic partnership with a long-term partner with its commitment to democratic and liberal international values, and (still growing) synergy with the United States and European powers.

However, with all of India’s Quadrilateral Security Dialogue (Quad) partners bound together in their censure of Russia and imposing international sanctions to deter its continued actions, cracks have begun to appear in the grouping. Whether such cracks deepen to form a chasm between India and its Quad partners remains a key concern for Japan.

As the latest (emergency) Quad Leadership Summit showed, India remains the only power that has not called for harsh actions against Russia. Moreover, the meeting took place in the backdrop of India’s abstentions in the United Nations and other international forums vis-à-vis condemning Russian aggression. The only point of agreement that emerged on the matter stated that “unilateral changes to the status quo with force like this should not be allowed in the Indo-Pacific region”, as highlighted by Kishida himself.

Such an overture has reiterated support to the “free and open Indo-Pacific” outlook, but India is swiftly emerging as the odd one out, and Kishida’s upcoming India visit is likely to deftly draw attention to the same. As seen in the Quad foreign ministerial meeting in February 2022 as well, India cautiously broke away from its Quad counterparts on questions pertaining to Ukraine with India’s Foreign Minister Subrahmanyam Jaishankar returning focus to the concept of “we are for something not against someone”.

India’s attempts to stay above the fray have emerged as a point of concern for Tokyo, especially as the Quad and US engagement in the region both remain greatly dependent on India. As an old US ally, Japan’s strong ties with Delhi are better established than the Global partnership of India and the United States, as they are based on longer and more successful collaborations.

In such a scenario, while at present the West is understanding of India’s reluctance, should Russian aggression grow in Ukraine, India’s Western partners may not continue to show the same resolve and encourage India to act. In this context, Kishida’s visit comes as a need of the eleventh hour with Japan prepping to be a good Samaritan. Kishida will no doubt look to broach the subject of Ukraine within the broader context of their Indo-Pacific and China focus.

Yet, at the same time, Kishida’s visit has much more significance than the matter of India’s position on Russia’s Ukraine invasion. Most importantly, the visit comes as a critical meeting between two of Asia’s key leaders. With Kishida assuming Japanese leadership at a time of intense geopolitical flux, his vast experience with diplomacy and foreign policy, as Japan’s longest-serving foreign minister ever, is an asset. Kishida has a nuanced understanding of the diplomatic situation and this is a critical tool in his skillset that he can effectively employ to assess India’s unique position on the matter.

For India too, Kishida’s visit forms an opportune moment to clearly convey its precarious posture and ensure that its difference on the Russian matter does not become a persistent point of division and create a vast gap between India and its Quad partners. Moving forward, manoeuvring the delicate balance between Russia and the West with Japan by its side, will allow India better leeway in the Quad and with New Delhi’s bilateral relationship with the United States.


Building a Leadership Connect and Beyond

Kishida’s upcoming state visit, beyond building a new and stronger leadership connection via invigorating attempts to reach consensus on hot topics, will also factor greatly for the growth of the India-Japan bilateral relationship. As 2022 marks 70 years of diplomatic ties between India and Japan, Kishida’s visit sets the right stage to assess the growth of their partnership and plan further implementation for the future.

Reportedly, topics like the Mumbai-Ahmedabad bullet train project are also on the cards, while Northeast India cooperation and potential growth of the Supply Chain Resilience Initiative (SCRI) must be identified as value additions to the discussions.

The March 2022 SCRI ministerial meeting set the objective of identifying key manufacturing and services sectors where the India-Japan-Australia trilateral may effectively act. This could be a point of discussion during Kishida’s visit.

Furthermore, as the notion of a China following Russia’s suit and engaging in military action in the Indo-Pacific grows with regards to Taiwan, the Indian Ocean, and the East and South China Seas, India and Japan can address ways in which the Quad countries can work to prevent Beijing from drawing inferences from the precedent set by the Ukraine conflict. India and Japan have the opportunity to think innovatively at present over regional security issues.

Much like India’s Russia partnership, Japan and India (as well as Australia) have deep economic ties with China which they are not likely to disregard in a hurry. At a time when strategic circles are arguing that Ukraine is foreshadowing a similar action by China in the Indo-Pacific, the time for the two Quad countries to strengthen their cooperation in the field of science, technology, trade and third countries is ripe.

The state visit, taking place at the behest of Japan, is looking to also see whether the bullet train project can be expanded beyond its present purview, while drawing focus on supply chain connectivity. Other topics of discussion will be centered on China and its military activities in East Ladakh, Senkaku Islands, joint air exercises with Russia in the Sea of Japan, assertions on Taiwan and sending of warships into the Philippine territorial waters and the Sulu Sea.

Notably, the visit will mark the first trip by a sitting Japanese leader since Shinzo Abe’s visit in 2017. It is therefore crucial that Modi and Kishida take full advantage of the event to revisit and recommit to a joint agenda for growth and building greater global cooperation via international forums.

With the Quad Leaders’ Summit set to be hosted by Japan in May 2022, Kishida’a visit will be a test of his leadership skills. Kishida’s last visit to India – as foreign minister in 2015 – successfully culminated in the “Special Partnership for the Era of the Indo-Pacific.” Now, as prime minister, Kishida must once again highlight his belief of how India and Japan share a special partnership that can persist as a pivotal axis in Asia.

Kishida’s visit will address several delicate topics, including the gap between India and its Quad partners (Japan included) over Russia. The Japanese Prime Minister will therefore need to make use of a rich diplomatic skill set to ensure it is successful and culminates in a substantial step forward.

Dr. Jagannath Panda is the Head of the Stockholm Centre for South Asian and Indo-Pacific Affairs (SCSA-IPA) at the Institute for Security and Development Policy (ISDP), Sweden. Dr. Panda is also the Director for Europe-Asia Research Cooperation at the Yokosuka Council of Asia-Pacific Studies (YCAPS); and an International Research Fellow at The Canon Institute for Global Studies (CIGS), Japan; and a Senior Fellow at the East Asian Security Centre at the Bond University, Australia.