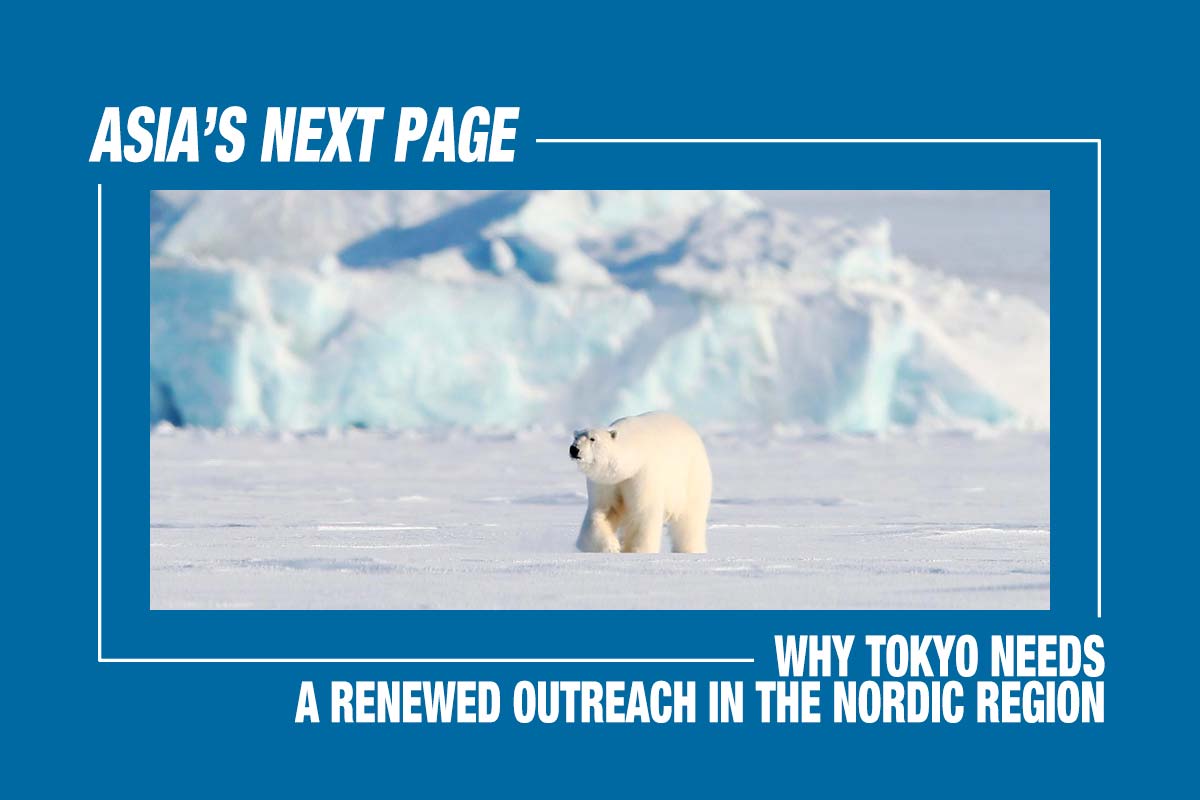 A polar bear in the Arctic. (Sankei)

As the Ukraine crisis worsens and Europe faces a real threat of energy disruption, Japan – a major importer of liquified natural gas (LNG) – has agreed to consider diverting resources to Europe in a sign of strong Japan-EU ties.

Despite overall robust Europe ties, Japan’s outreach and relationship with the Nordic states – Denmark, Sweden, Finland and Norway – remains understated. While EU-Japan exchanges are defined by and managed through a prism of great power politics, Japan’s ties with Nordic states have been largely defined based on commercial, energy, sustainability and Arctic-centred interests.

Japan has long been a valuable but distant friend for the Nordic-Scandinavian countries. What are the key pillars, and moving forward, what are the key potential areas for heightened Japan-Nordic cooperation, particularly in the connectivity and sustainable energy domains?

Although separated by over 8000 km, Japan and the Nordic region have much in common, not the least due to their shared interest in the Arctic and their shared security dynamics with Russia as their direct neighbor. Since the early 1900s, Nordic countries have been of key interest to Japan’s political thinking as a model of “alternative modernity”. In this context, a Japan-Nordic connection has persisted for several years, and their cooperation has only strengthened and diversified in recent years.

Yet, beyond these bilaterals, Japan’s interaction with the Nordic countries in recent times is primarily conducted through their membership of the Arctic Council, in which Japan has been present as an observer since 2013. Japan’s Artic Policy, released in 2015, explicates its clear interest in changing the Arctic environment by making a “proactive contribution to peace” through international cooperation. It looks to establish Tokyo as a key player actively contributing to the issues in the region – including by instituting an alternative ‘Arctic sea route’ connecting Europe and Asia. The Nordic states are a vital partner in this regard.

In a sign of the importance Japan accords to Nordic powers, Tokyo holds annual Japan-Nordic Baltic seminars on topics ranging from the security environment in the region, to the politics and economics of the region.

Amid the changing global strategic landscape, Japan’s interactions with the Nordic states are rapidly expanding, with a view of practical cooperation in areas like sustainable development through a clean and green partnership, enhanced connectivity, and digital innovation.

Mapping a Clean and Green Partnership

Much of the cooperation between Japan and the Nordic countries has centred around sustainable development. In May 2021, the EU and Japan committed to a “Green Alliance” to cooperate towards climate neutrality. The agreement included collating their respective research and development on decarbonization projects and renewable energies, and an overall agreement to pursue and promote green technology such as renewable hydrogen.

Scandinavia has proved to be technologically advanced and innovative with regards to green technologies, and Japan’s ambassador to Norway, Masahiro Tauchi, has said that Japan looks to Nordic countries such as Norway for inspiration. For example, the newest development in their cooperation with regards to green energy has been the announcement that Tokyo Gas will partner with a Danish energy supplier, EWII, to develop 1GW of renewable energy projects in Nordic countries by the end of the decade.

Moreover, the Nordic countries have huge potential to aid Japan’s plan to shift to hydrogen energy. As part of its transition to zero carbon emissions, Japan is planning to spend $19 billion USD to make hydrogen a viable power source by 2030.

To bring this to fruition, Tokyo has indicated a particular interest in the advanced hydrogen technology that has been developed in Norway, and also the potential for green hydrogen produced in Northern Scandinavia to be transported to Japan, as currently happens with Norwegian natural gas.

Japan-Nordic Potentials within the EU Framework

Japan-Nordic cooperation on sustainable development must necessarily be situated within the EU framework. The EU’s recently released Global Gateway strategy provides significant scope for greater collaborations between them. Most prominently, the Global Gateway plan incorporates a “green and clean” focus that provides increased European investments in “developing infrastructures that are clean, climate-resilient and aligned with pathways towards net zero emissions”.

Importantly, considering the impetus on renewable energy, Europe’s strategy – with its international focus – includes an explicit focus on renewable hydrogen production, creating a competitive market for its trade.

This area is of key interest to Japan, which boasts the world’s largest hydrogen production facility, the Fukushima Hydrogen Energy Research Field (FH2R). The Fukushima facility began production in 2020, coming as a major step forward in forging the country’s green transition efforts.

Nordic countries too are clear frontrunners in innovation utilizing renewable energy. They already have national hydrogen strategies, and a Nordic Hydrogen Partnership that focuses on hydrogen-based solutions in transportation (for instance as fuel in ships). In this context, there is strong potential for Japan-Nordic (and EU) tie-ups in collaborative research in the domain, possibly under the EU-funded Horizon Europe program.

The scope for Japan-Nordic cooperation in research and innovation is not limited to green technology. It can span several other domains related to digital innovation, such as “cross-border innovation in healthcare”.

Japan is currently participating in joint healthcare-related scientific research with Nordic countries, for instance, via a study on healthy longevity, given their similar demographics, and this can further expand moving forward.

Digital connectivity was a key focus between Japan and the EU under their 2019 Partnership on Sustainable Connectivity and Quality Infrastructure, alongside areas like renewable energy, transportation, and infrastructure development. In such domains too, Nordic-Japanese cooperation can effectively complement the broader goals that Tokyo has identified with Brussels.

Japanese investment banks are gradually looking more towards Nordic countries for opportunities to invest in digital connectivity. The Japan Bank for International Cooperation (JBIC), for example, signed an agreement for equity participation in the JB Nordic Fund that invests in advanced IT companies in Nordic and Baltic states.

Maritime Connectivity via the Arctic

Another area of Nordic-Japanese cooperation that can contribute to connectivity and infrastructure would be in terms of maritime shipping and sea routes. Japan has a rich maritime history and the largest merchant fleet in the world. As such, bilateral relations with Nordic countries like Norway have been focused towards the shipping sector.

A part of Japan’s EU strategy concerns looking into the possibility of an alternative Arctic Northeast Passage, which would provide a shorter shipping route between Asia and Europe, avoiding the Suez Canal. Cooperating with the Arctic Council to assess the plausibility of this passage, and thus cooperating with Nordic countries is paramount to this strategy.

The Northeast Passage would not only improve the connectivity between Asia and Europe in terms of the transport of goods, but it would also diminish the effects of supply chain disruptions, which became particularly evident in March of 2021 with the container ship stuck in the Suez Canal. However, there is a large amount of research and technological development that still needs to be carried out in order to ensure the safety of navigation in this part of the Arctic Ocean and Japan is keen to offer its expertise and promote the research through the Arctic Circle.

Cooperation on the Arctic must also factor in China’s increasing interest in the pivotal region. With an objective to become a “polar great power” by 2030, Beijing is looking to diversify its maritime routes and enhance its presence in the Arctic as a part of its Maritime Silk Road (MSR).

Beijing views the natural resource-rich and under-governed Arctic as one of the world’s foremost and new strategic frontiers that is “ripe for rivalry and extraction” and therefore crucial for China’s continued growth.

As China rapidly expands its scientific, economic and military activity (and even coercion) in the Arctic, Japan and the Nordic states can form a middle power partnership for enhanced maritime capacity and connectivity in the face of great power competition.

Under its Indo-Pacific strategy or outlook, Japan is already looking to compete economically with China to limit its influence and ensure it does not gain control over critical energy infrastructure, thereby reigning over Japan’s energy shipments.

As China looks to settle the East and South China Sea disputes, it will shift growing focus to the Arctic. Japan and the Nordic states thus have vested interest in taking proactive action to prevent China from gaining sole access and control over the Arctic’s resources and the Northeast Passage that would force increased dependency on Beijing.