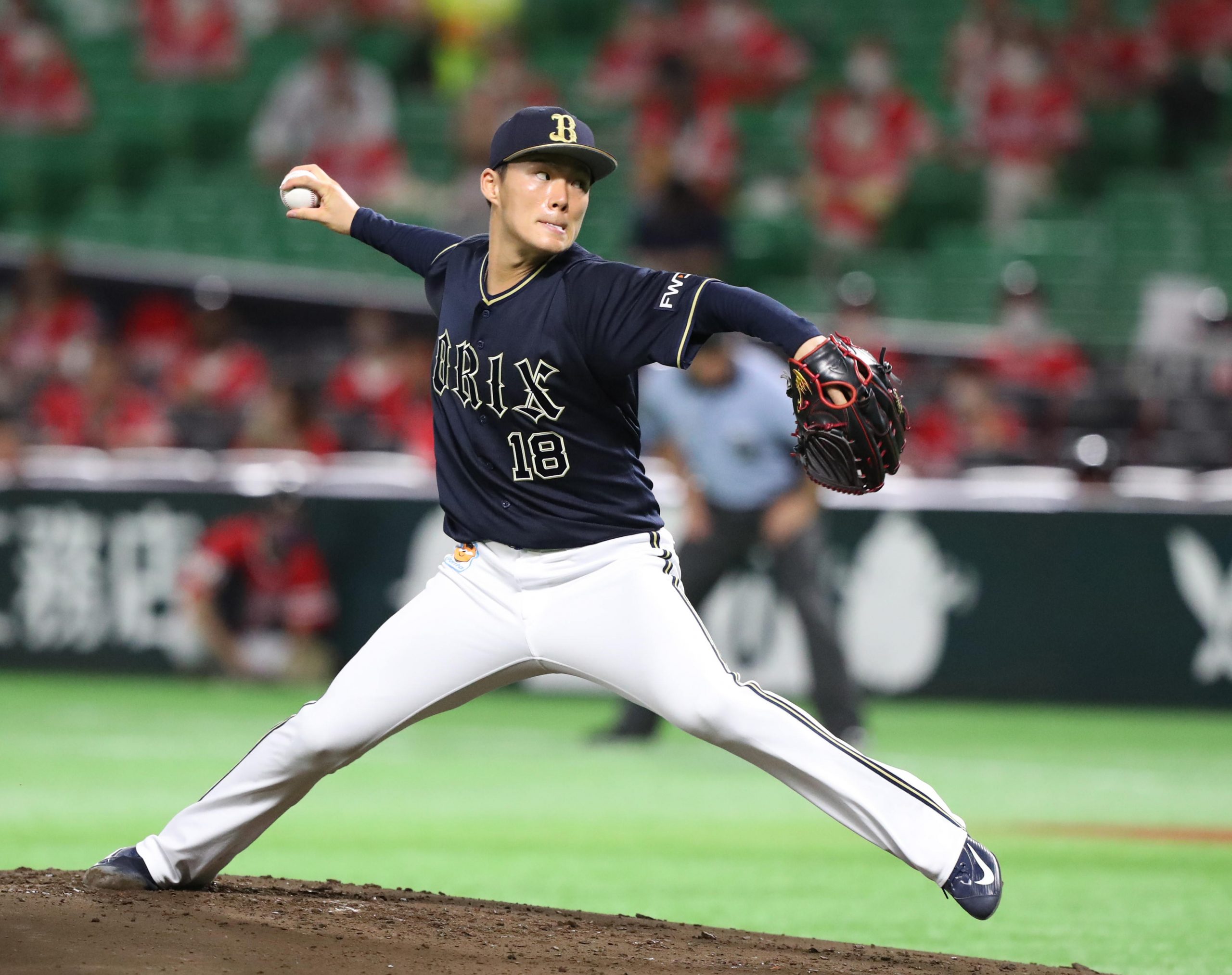 Orix Buffales hurler Yoshinobu Yamamoto is tied for the Pacific League lead in victories and is No. 1 in ERA among starters.

If you believe the old adage that good pitching beats good hitting, Japan should be well positioned to win its first gold medal in baseball at the Tokyo Olympics.

Even with one of the biggest names out, Japan manager Atsunori Inaba will have plenty of options with his pitching staff when the six-nation tournament starts on July 28.

Last year’s Central League MVP Tomoyuki Sugano has been forced to pull out of the Olympics as he struggles with his form. Sugano, who has been sidelined several times with injuries, is just 2-4 this season, with a 3.29 ERA for the Yomiuri Giants.

If Inaba is seeking an ace to replace Sugano, Yoshinobu Yamamoto of the surprising Orix Buffaloes is the leading candidate.

Yamamoto struck out six over seven scoreless innings, while allowing one walk and six hits.

“I was forced to pitch with runners on base in almost every inning, so I was happy I was able to protect our lead,” said Yamamoto, who also has a PL-leading ERA of 1.82 along with 121 strikeouts in 16 games.

In naming his 11-man pitching squad for the Olympics, Inaba said of Yamamoto, “He can be used both as a starter and in relief situations. I consider him a very important pitcher on our team.”

With the victory on July 9, Yamamoto moved into a tie for the league lead in wins at nine with rookie teammate Hiroya Miyagi (9-1).

If Japan is going to win its first gold medal, Inaba will need a bona fide ace he can give the ball to in pressure situations. All signs point to Yamamoto being that player.

Yamamoto and Miyagi have provided Orix with the best 1-2 combination in Japanese baseball this season.

The two pitchers helped Orix to an 11-game win streak in June, the franchise’s longest since the Hankyu Braves managed the feat in 1984, en route to winning the PL pennant.

The Buffaloes, who finished last in each of the last two seasons, are aiming for the team’s first PL pennant since 1996, when Ichiro Suzuki led the Orix BlueWave to the Japan Series championship.

In mid-June, Yamamoto turned in the type of performance that Inaba is hoping for, when he struck out 15 batters over eight innings in a 4-0 shutout of the Hiroshima Carp.

Yamamoto was a member of the Japan national team that won the 2019 Premier12 baseball tournament. He was used as a reliever on that team, but is certain to play a more prominent role this time around.

Other Key Pitchers for Samurai Japan

Meanwhile, SoftBank pitcher Kodai Senga, who wasn’t originally named to the team due to injury, has been brought in as a replacement for Sugano, but he struggled in his first game back when he was shelled for 10 runs in an 11-3 loss to the Chiba Lotte Marines on July 6.

If he can regain his form, Senga certainly would be an important piece of the puzzle for Inaba. The 28-year-old right-hander led the Pacific League last season in wins, ERA and strikeouts.

Then there is Masahiro Tanaka. The former New York Yankees pitcher is 3-5 with a 3.00 ERA and 68 strikeouts in 12 games for the Tohoku Rakuten Golden Eagles. Respectable numbers, but not what you would expect from the ace of your staff.

Just based on his international experience alone, Tanaka figures to play a key role. Tanaka was a member of the Beijing Olympic team that failed to win a medal in 2008 and has made no secret of his desire to atone for that bitter experience.

In addition to seven largely successful seasons with the Yankees, Tanaka was a member of Japan’s team that won the 2009 World Baseball Classic and also took part in the 2013 tournament.

Koyo Aoyagi is having a spectacular season for the Hanshin Tigers. The 27-year-old right-hander is second in the Central League lead in wins (8) and leads the league in ERA (1.83).

Masato Morishita of the Hiroshima Carp has also had a strong first half to the season with five wins and a 2.51 ERA. Rookie Hiromi Ito has also been strong for the Hokkaido Nippon Ham Fighters, compiling a 7-4 win-loss record.

Japan won the baseball tournament at the 1984 Los Angeles Games when the sport was not part of the official Olympic program, and has since taken bronze twice in Barcelona and Athens (1992 and 2004) and silver once in Atlanta (1996).

Samurai Japan will open its Olympic campaign against the Dominican Republic on July 28 at Fukushima Azuma Stadium.