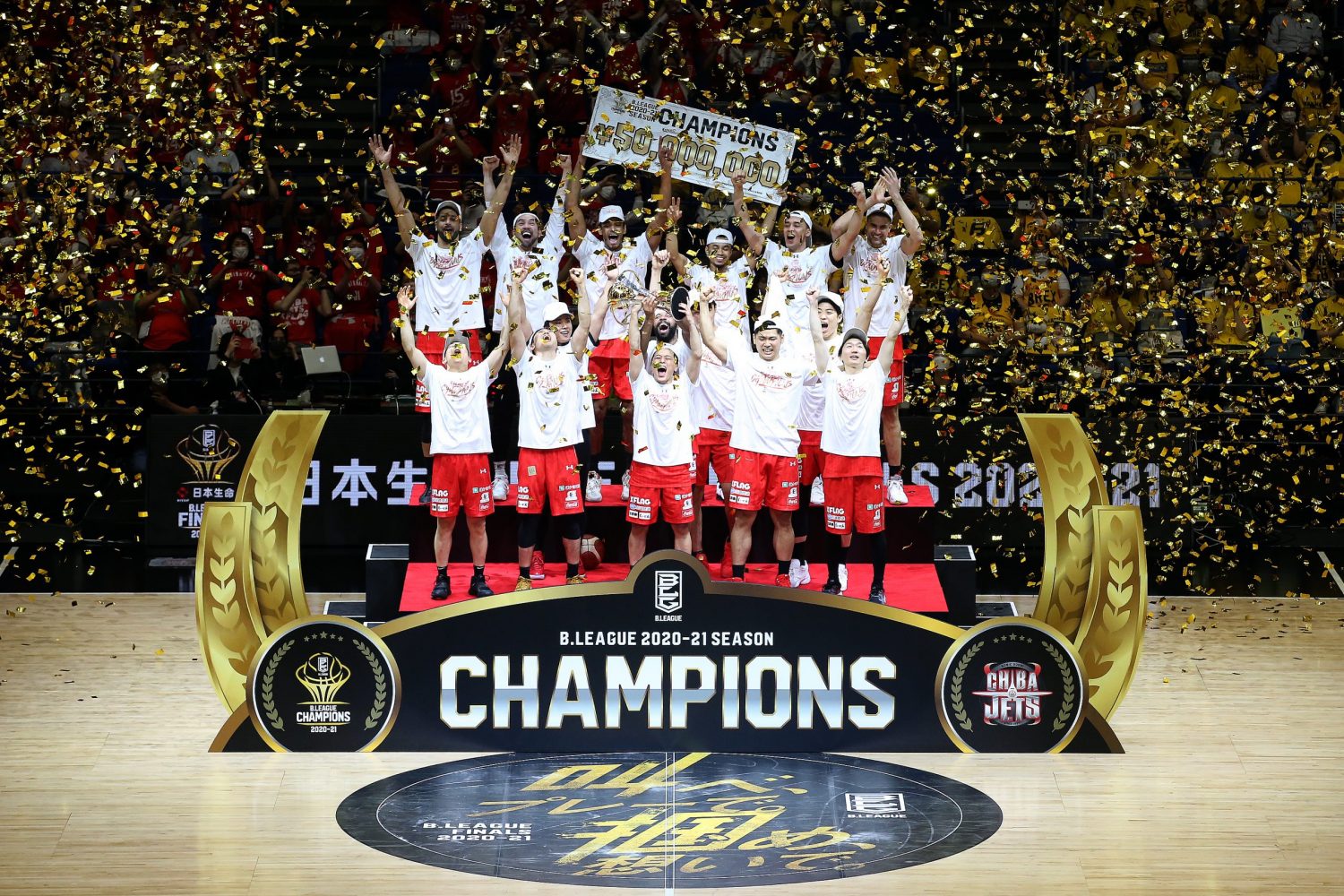 The Cbiba Jets celebrate after winning the B. League championship on June 1 at Yokohama Arena. (B. League)

YOKOHAMA ー For the Chiba Jets, the third time was the charm.

After experiencing the bitter disappointment of back-to-back championship game losses in the 2017-18 and 2018-19 seasons, the Jets won their first B. League title on Tuesday, June 1.

Chiba outplayed Utsunomiya down the stretch in Game 3 of the B. League Finals, earning a 71-62 triumph at Yokohama Arena.

The B. League canceled the playoffs last year due to the global pandemic, then expanded the championship round format for this season. Instead of a winner-take-all, one-game format, the league instituted a three-game title series for the first time for the 2020-21 campaign. Chiba won Game 1, 85-65, on Saturday, May 29. Utsunomiya rebounded with an 83-59 victory in Game 2 on Sunday, May 30.

In the fourth quarter of the series finale, the Brex, who had a league-best 49-11 record in the regular season, made 5 of 17 shots. They were 0-for-7 on 3-point attempts.

The Jets (43-14 in the regular season) converted 6 of 13 shots from the field in the fourth. As the Brex fouled Chiba players often down the stretch, they sank 9 of 12 at the foul line in the final quarter.

Gavin Edwards led the champions with 15 points and grabbed seven rebounds. Shannon Shorter scored 14 points, including 6-for-6 at the free-throw line, and B. League Finals MVP Sebastian Saiz had 12. Josh Duncan added 10 points and matched Edwards for the team lead in rebounds. Yuki Togashi had seven points and dished out a team-best four assists.

For Utsunomiya, Yusuke Endo finished with 13 points, Makoto Hiejima had 12 points before fouling out, and Ryan Rossiter added 11 points. Josh Scott and Jeff Gibbs had eight and seven points, respectively.

Shorter stretched the Chiba advantage to three on a jumper in the lane on the Jets’ next possession, and Saiz followed with another shot from close range to make it 65-60 with 38.4 seconds on the game clock.

The Brex ran out of time to mount a comeback attempt.

Shorter drained two free throws with 27.9 seconds left, and it was 67-60 at that point.

Scott scored inside to trim the lead to five before Shorter stepped to the charity stripe again with 16.2 seconds remaining. Two more shots resulted in two more Jets points, making it 69-62.

He was fouled again with 4.2 seconds to play, and the exact same thing happened.

As the final seconds ticked off the clock, the Jets began to display pure joy on the court and on the bench and you could sense the same excitement from the red-clad fans in the stands.

When it was over, Edwards said the title-winning victory helped remove the pain from past seasons.

“It felt like it just slipped through us,” he said of defeats in 2018 and 2019 to the Alvark Tokyo in the title matches.

“This is not just for us, but for our fans.”

A major component of the Jets’ success during his four seasons with the club, Edwards talked about his focus on being a forceful presence inside in the final game of the championship series.

Mission accomplished for Edwards and his teammates.

Chiba captain Togashi hugged his teammates and flashed a big smile as they waited for the championship trophy to be presented to them.

That honor fell to B. League chairman Shinji Shimada, the former Jets president. Shimada handed it to Togashi before the team stood on a raised platform for group photos.

Brex players watched this defining moment from their seats on the sideline. There were visible tears in their eyes.

As Togashi raised the trophy over his head, gold glitter splashed all around the team in a vivid exclamation of the team’s hard-earned title. New additions Shorter and Saiz helped energize the club from start to finish, including their three rounds of playoff competition.

To reach the final, the Jets had to beat the host Ryukyu Golden Kings in Game 3 of the semifinals on May 24 at Okinawa Arena.

“Finally, we were able to win it,” Ono told reporters afterward. A succinct summary of their never-wavering quest.

“It’s a great feeling to be able to finish the season as champions,” Saiz said.

The Spaniard noted that winning the title was the team’s goal since the first day of preseason training camp. He said he always plays with a “winner’s mentality” and that confidence rubbed off on his teammates.

“This is great,” Jets wingman Shuta Hara said, summing up the mood of his team after the two championship runner-up finishes.

The teams traded baskets in a high-energy opening quarter, keeping the score close and captivating fans of both East Division rivals. A Hiejima running jumper tied it at 16-16 with nearly 3:20 left in the opening period.

Edwards then answered with a 3-point shot to give the Jets a 19-16 lead.

With 1:18 to play in the quarter, Jets guard Fumio Nishimura nailed a difficult off-balance layup and got fouled in the process. He missed the foul shot but gave his team its biggest lead (21-16) in the early going.

The Brex pulled within 21-18 before the first quarter ended.

After a Kai Toews basket accounted for the final points of the opening stanza, Chiba used a 7-0 spurt to open the second quarter to take a 10-point lead. A Duncan layup capped the scoring run.

The Brex rallied, with Rossiter burying a wide-open 3-pointer.

Two possessions later, Endo canned a 3 from the left baseline as Utsunomiya trimmed the deficit to 28-24 with 6:11 left before halftime.

The rest of the second quarter was a back-and-forth duel, and a Hiejima layup with 27 seconds left tied it at 35-35.

Saiz was the lone double-digit scorer on either team with 10 points before intermission.

The battle for the title came down to 20 spirited minutes, and in the words of Edwards, the euphoria of victory contrasted with the pain that the Jets experienced before, which he called “an excruciating, emotional feeling.”

Utsunomiya had the first key stretch on offense in the third quarter, with Scott making a pair of free throws and Rossiter scoring inside on consecutive trips down the floor. The seconds of Rossiter’s buckets prompted Chiba, which was trailing 41-38, to call a timeout at the 6:36 mark.

Chiba guard Koh Flippin produced the first tie of the quarter on a smooth pull-up jumper near the free-throw line to make it 44-44.

Endo sank a game-tying 3-pointer on the Brex’s last shot of the third quarter, and it was 50-50 entering the final quarter.

With 3:47 remaining in the fourth, the Jets led 61-58 after an Edwards layup, and it appeared the championship would be determined in the final minute.

After all, neither team had led by more than four points up to that point in the second half.

But the Brex offense went cold down in the closing minutes, altering the narrative.

“I think it really just came down to the last five minutes. They made the plays and we didn’t. … Credit to them for making the plays,” Brex star Rossiter said.

“They were more decisive on offense,” the veteran forward said of the Jets in the fourth quarter.

Rossiter said the Utsunomiya coaches put a good game plan in place, but “towards the end of the game, we just didn’t make plays.”

Brex coach Ryuzo Anzai noted that the final two minutes determined the outcome of the game. He said he enjoyed the season, though the last game was a big disappointment.

“I am really grateful to all the fans who supported us and everyone who was involved ,” Anzai commented. “I think Chiba’s wonderful feelings and play exceeded us. “

As several Brex players were pressed by reporters for answers about their collective mood after Game 3, Rossiter perhaps gave the most compelling answer in the press room.

“This feeling hurts more than I can put into words,” Rossiter declared.

“This hurts a lot,” Rossiter continued before adding, “(but) at least we got to settle it on the court.” He referred to the fact that the B. League playoffs didn’t take place last year and he was grateful to be able to play an entire 2020-21 season during the pandemic.

“I’m really glad that the efforts of the past year have been rewarded,” Togashi remarked.