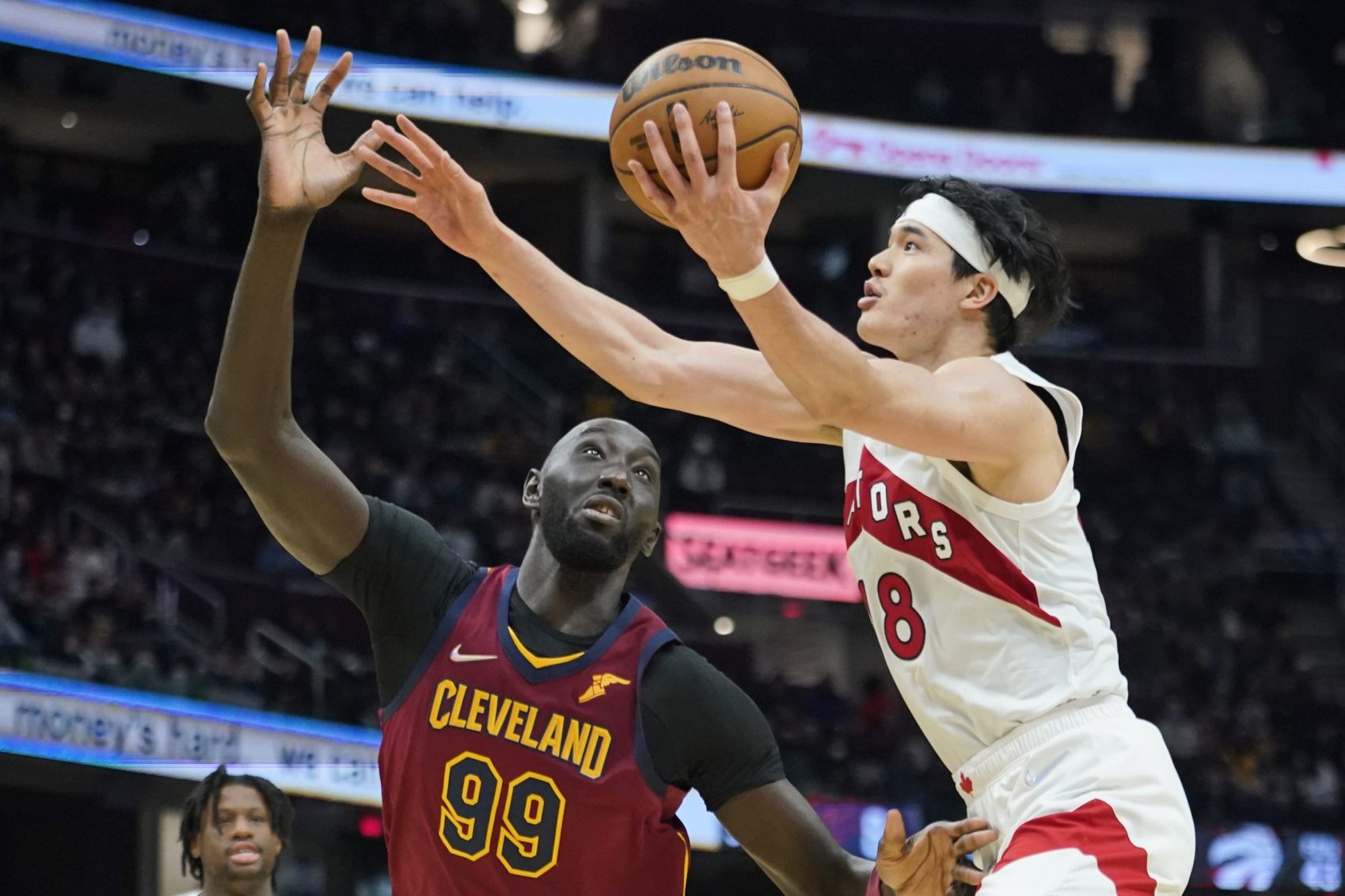 Toronto Raptors forward Yuta Watanabe drives to the basket against Cleveland Cavaliers center Tacko Fall in the second half on December 26 in Cleveland. (Tony Dejak/AP)

COVID-19 has decimated the Toronto Raptors roster, with 10 players currently off the court in the NBA’s healthy and safety protocols. As a result, two Raptors games last week were postponed because they couldn’t suit up the NBA’s minimum requirement of eight players.

Under difficult conditions, the visiting Raptors regrouped to face the Cleveland Cavaliers on Sunday, December 26. Fourth-year pro Yuta Watanabe, making his first start of the season, had a stellar performance, scoring an NBA career-best 26 points on 11-for-20 shooting and grabbing 13 rebounds, also a career-high total in the top hoop league, in 37 minutes.

But the Raptors, whose eight-man rotation included four players (D.J. Wilson, Juwan Morgan, Daniel Oturu and Tremont Waters) making their debut with the club, were overwhelmed by the Cavaliers, falling 144-99. All four men were signed to 10-day emergency contracts. Veteran stars Fred VanVleet and Pascal Siakam, key players on Toronto’s 2018-19 NBA championship team, are among the plethora of sidelined players.

“We had to take a pretty good loss tonight, but we’ll bounce back,” Raptors coach Nick Nurse told reporters after the game. “It was a good game for Yuta, and that’s about it.”

Watanabe, who’s averaging 6.7 points and 4.0 rebounds per game, acknowledged that the impact of playing with a makeshift rotation was a unique challenge.

The Raptors (14-16) only had one practice, conducted before the game, with the four new signees before their clash with the Cavaliers on Boxing Day.

“We met those guys on the bus on the way to the arena,” Watanabe was quoted as saying by The Associated Press. “Because we weren’t permitted to do anything together the last few days, I spent a lot of time in the gym by myself putting up shots. That’s all you could do.”

Watanabe had a career-high 40 points in the NBA G League while playing for the Memphis Hustle on January 22, 2020. He notched his first-ever NBA double-double (12 points, 11 rebounds) against the Sacramento Kings on December 13.