'Battle' is Kiyomizu Temple's Kanji of the Year 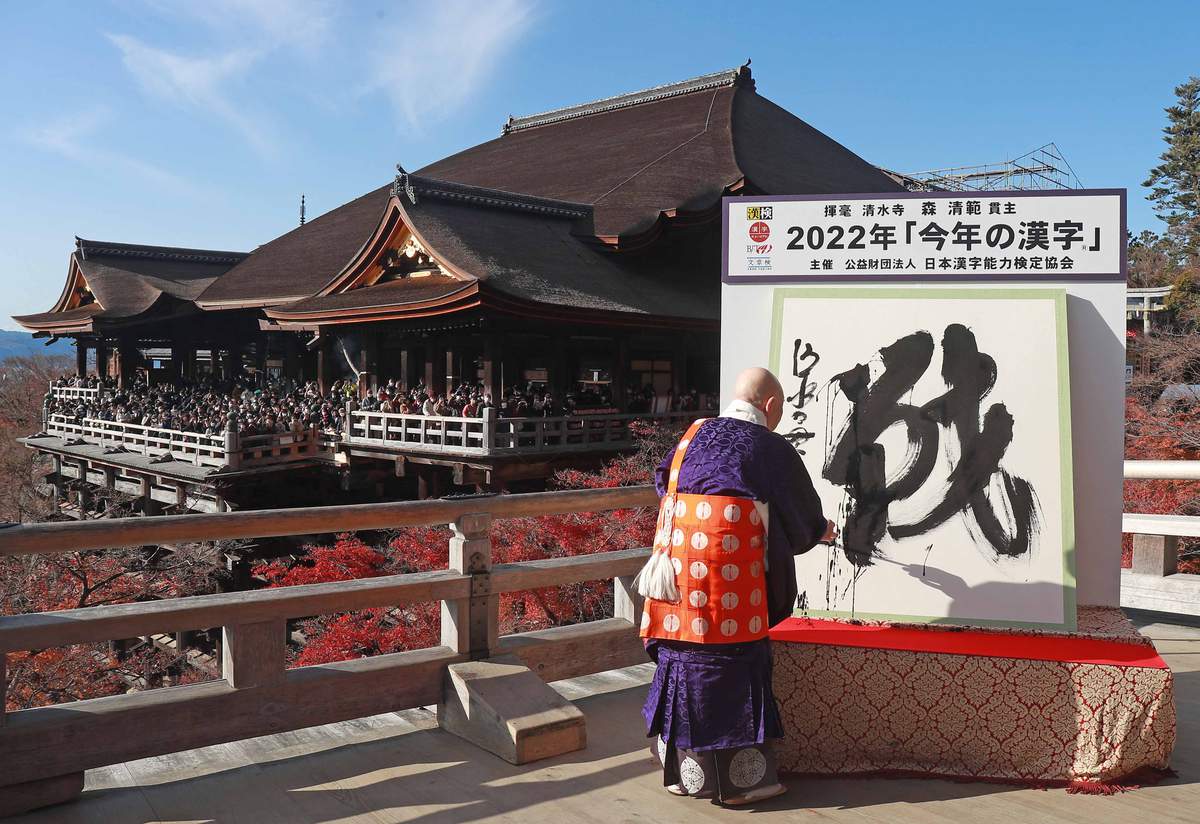 Seihan Mori, the chief priest of the Kiyomizu temple, draws the Kanji of the Year on December 12. (© JAPAN Forward)

The famous Kiyomizu Temple in Kyoto announced its Kanji of the Year on December 12, selecting the Japanese kanji used for "war" and "battles." It is read "sen" or "ikusa," and written in Japanese characters as 戦.

At 2 PM in Kyoto, Seihan Mori — the chief priest of the Kiyomizu temple favored among tourists — stepped in front of the white canvas and drew the Japanese character.

The 戦 Kanji received the most votes of 2022 — over 18,000 out of over 223,000 total submissions. This was the second time that 戦 has became the character of the year. It was selected the last time in 2001, when the 9.11 terrorist attacks against the United States shook the world.

This year, the main reasons for choosing the character were Russia's invasion of Ukraine and North Korea's missile launches. That is according to the spokesperson from The Japanese Kanji Aptitude Testing Foundation, which runs the annual event.

The organization also cited factors such as the weak Japanese yen and rising cost of living, which have contributed to citizens feeling a sense of struggle, or "battle" in everyday life.

There were also more positive reasons for choosing the Kanji. Among them, the Beijing 2022 Winter Olympics and the FIFA World Cup, which showcased the achievements of Japanese athletes. These examples emphasize the sense of sportsmanship and competition, bringing in another nuance of the Kanji of the Year, 戦.

Kiyomizu Temple's selection of the Kanji of the Year expresses a recurring theme found throughout the year that is just ending. In this case, it reflects the year 2022.

One year ago in 2021, the Kanji chosen was gold, or kin  金, a reference to the Tokyo Olympic and Paralympic Games. In 2020, the Kanji of the Year was mitsu, or 密. This character means "crowded." It became a buzzword in the government's messaging during COVID-19 pandemic to discourage people from gathering in crowded spaces and close contact settings.

Chief Priest Mori reflected on the past year of 2022 in a comment broadcast by NHK. "I think that the war in Ukraine left a deep impression on people. I hope that the New Year will bring more peace of mind to everyone."