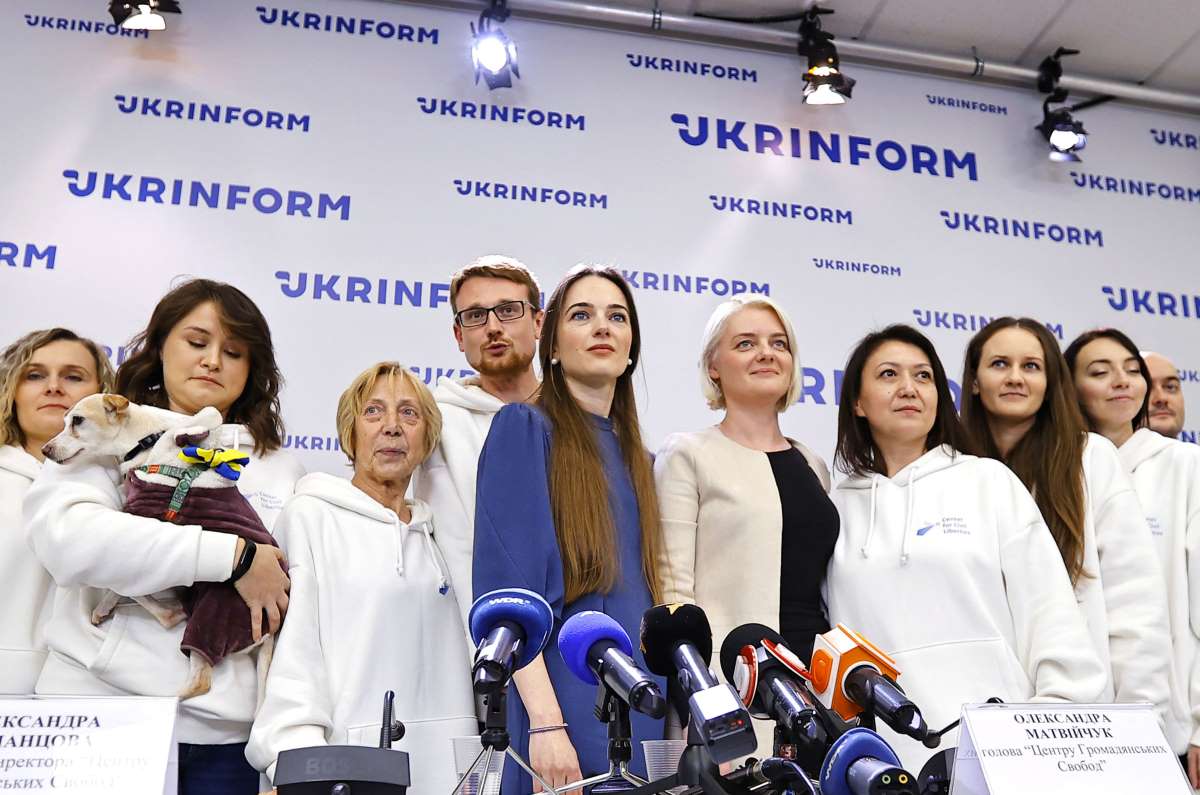 Kyiv, Ukraine— In a recent exclusive interview with The Sankei Shimbun, Oleksandra Matviichuk spoke about the horrors of the war in Ukraine. Matviichuk (39) is head of the Ukrainian human rights organization the Center for Civil Liberties (CCL). Her group is one of the winners sharing the 2022 Nobel Peace Prize.

Matviichuk explains the background to the Russian military's ongoing murdering of civilians and attacks on Ukraine's power infrastructure. And she charges that Vladimir Putin and other Russian leaders view atrocities as a "means for waging war."

The evidence, she says, is Putin's awarding of honors to units that have engaged in such conduct. She adds that the only thing that will change Russia is "victory by Ukraine."

Matviichuk revealed that in investigating war crimes by the Russian military, the Center for Civil Liberties (CCL) has "documented cases of rape, murder, abduction, torture and other acts aimed at Ukraine's civilian population."

She adds that the reason the Russian military is using atrocities as a "tool of war." That is why it continues to repeatedly attack civilians and the infrastructure that supports their daily lives.

Putin personally presented medals to Russian soldiers who had participated in operations to occupy a suburb of Kyiv where massive atrocities toward civilians were confirmed.

Matviichuk emphasizes, "That amounted to a declaration by the supreme leader that it was fine for the Russian military to do whatever they want to civilians."

This is nothing new. Russia has repeatedly engaged in such conduct in past conflicts, says the head of CCL. Those include the wars in Chechnya and Syria. According to Matviichuk, "Because no one was punished, a 'culture' of accepting atrocities against civilians has taken root in Russia."

She speaks about when Russia annexed the Crimean Peninsula in southern Ukraine in 2014. "The international community's sanctions against Russia were extremely weak," she says. "That also served as an invitation for this further aggression."

Matviichuk was asked why an antiwar movement has not gained traction within Russia. In response, she says, "The fact is that the majority of the [Russian] public have supported the war."

She believes that "Putin is merely seeking to satisfy the public's desire for restoration of the Russian empire." Opportunities to change such imperialistic thinking among the people of Russia, she says, "will come only at such time as Ukraine defeats Russia.

Some observers question why human rights advocates from Russia and its ally Belarus were also chosen to share the Nobel Peace Prize along with the CCL. However, Matviichuk emphasizes that she has no problem with such groups being recognized for their work.

"The peace prize is not awarded to countries," she says. "It is given to those who stand up in solidarity to challenge a common evil."

Matviichuk expressed her thanks to the Norwegian Nobel Committee. "This award has provided us with a precious opportunity to make our voice heard by people," she emphasized.

About the Center for Civil Liberties

The Center for Civil Liberties, CCL is a Ukrainian human rights organization. It was established in 2007 for the purpose of advancing human rights and democracy in Ukraine.

In announcing the 2022 winners, the Norwegian Nobel Committee said:

“The Peace Prize laureates represent civil society in their home countries. They have for many years promoted the right to criticize power and protect the fundamental rights of citizens. They have made an outstanding effort to document war crimes, human right abuses and the abuse of power. Together they demonstrate the significance of civil society for peace and democracy.”

CCL has been identifying and documenting war crimes perpetrated against Ukrainian civilians by the Russian military since the Russian invasion of Ukraine began in February of 2022.