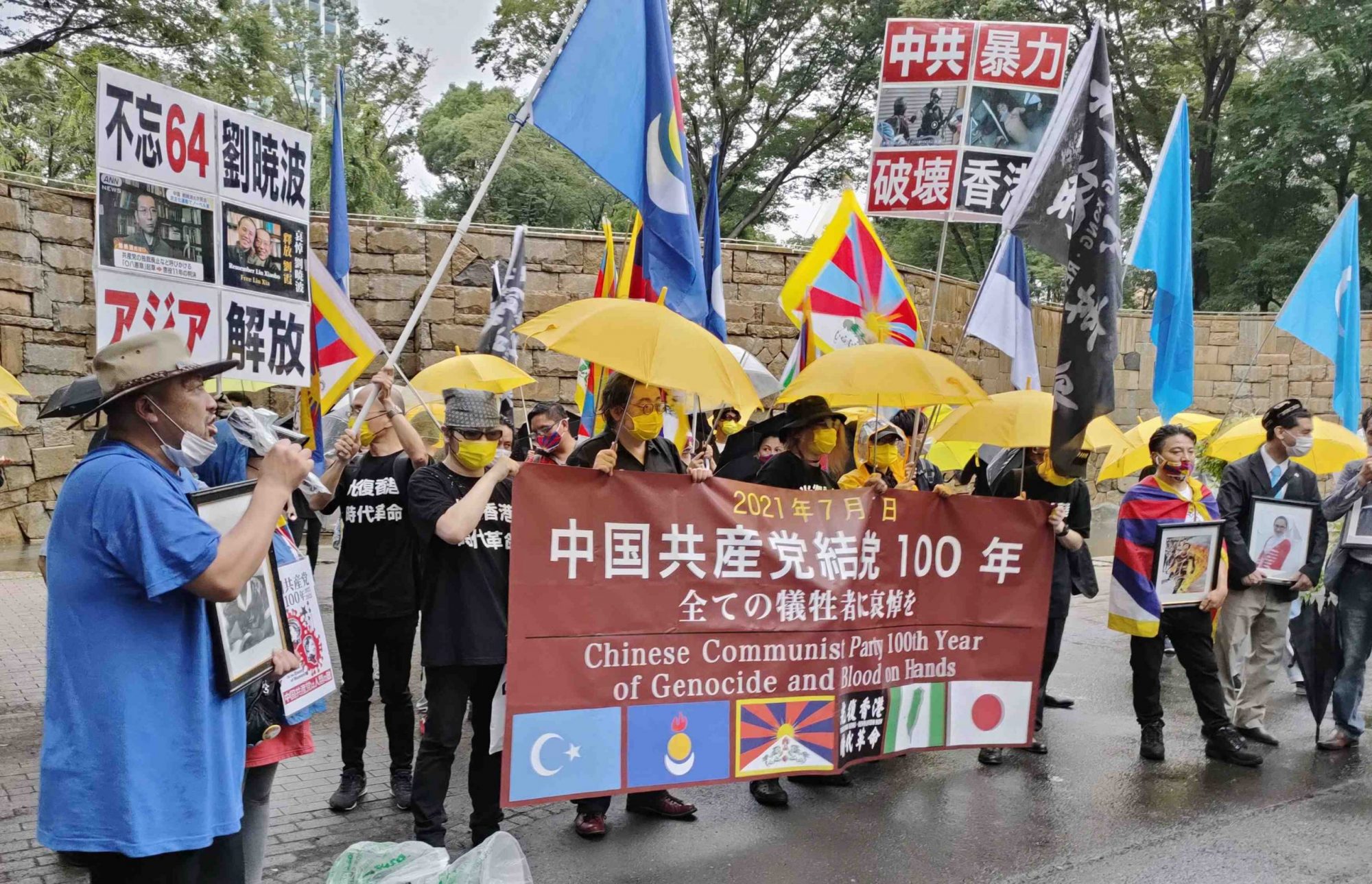 Uyghurs, Tibetans, and people from Hong Kong who live in Japan held a human rights rally on July 1, when the Chinese Communist Party celebrated the 100th year of its founding.

However, those from the Inner Mongolia Autonomous Region did not participate. The Chinese government authorities had maneuvered in advance, using their families and friends at home to apply pressure, The Sankei Shimbun learned on July 9.

The intimidation reportedly included threats of imprisonment of relatives back home for any Inner Mongolians who dared to join the rally. The revelation highlights how the Chinese government, which has adopted a policy of depriving Inner Mongolia of education in its own language and suppression of the ethnic Mongolian culture, has extended its reach to the coercion of Inner Mongolians living in Japan.

A group of about 200 people from the Xinjiang Uyghur region and Hong Kong held an orderly protest along a Tokyo street, holding candles to mourn the deaths of many victims of the Chinese Communist Party’s suppression. About 30 to 40 people from Inner Mongolia had initially been scheduled to take part, but only about 10 arrived.

It seems that the Chinese got hold of a list with the names of Inner Mongolians expected to join the demonstration, and applied pressure by having someone living in the Inner Mongolia Autonomous Region call and warn them to stay away, according to sources familiar with the matter.

Mr. U. Wuligeng, vice president of the Tokyo-based Southern Mongolia Congress (SMC), a group which has protested Beijing’s persecution of ethnic minorities, told The Sankei Shimbun he had received phone calls from multiple acquaintances and relatives in Inner Mongolia who urged him to refrain from joining the demonstration. It was the first time that he had received so many calls from home over his years of his protest activities, he said. In an interview, he told The Sankei Shimbun that “The Chinese authorities probably mobilized all my acquaintances to exert pressure on me.”

The Chinese government has put a freeze on his real estate and bank accounts left behind in the autonomous region, Mr. Wuligeng said. Although a person who called himself a police officer in China told him in a phone call that the freeze on his properties would be lifted if he abandoned the idea of taking part in the demonstration, he joined the protest as planned.

Another man from Inner Mongolia was also threatened by the Chinese authorities. The man’s elder brother living in the autonomous region was visited by a Chinese intelligence agent, who was quoted as telling him he would get government assistance to “help build your house, if you persuade your younger brother in Japan not to join the demonstration.” The intelligence officer reportedly then added, “If your younger brother participates in the demonstration, your relatives will be put in prison.”

A woman from the autonomous region who has recently begun participating in anti-China demonstrations in Tokyo received calls from her family and former classmates, about 20 people in total. After checking why those phone calls were made, she later learned that they had been coerced to do so by the Chinese police officers standing beside them, the sources told her. Deeply concerned about the current situation, the woman said, “Unless people outside the autonomous region act to apply pressure [on the Chinese government], the Chinese authorities will do what they want.”

Meanwhile, it seems that the Chinese authorities did not put pressure on Uyghurs or Hong Kong people who participated in the demonstration. Asked why, Daichin Olhunud, secretary general of Southern Mongolia Congress said, “Protest activities by Inner Mongolians are comparatively weak in terms of organizational strength compared to those of Uyghurs and Hong Kong people. Maybe the Chinese authorities were seeking to crush protests there before they become a threat to the Chinese Communist Party.”

Mr. Yang Haiying, a professor at Shizuoka University in Japan, who is from Inner Mongolia, explained to The Sankei Shimbun, “The Chinese authorities are currently extremely nervous over the autonomous region, simply because the region backs up to an independent country, Mongolia. So Beijing has been vigilant about the possibility of unification moves in the Inner Mongolia Autonomous Region.”

(Find access to the original Sankei Shimbun article in Japanese at this link.)