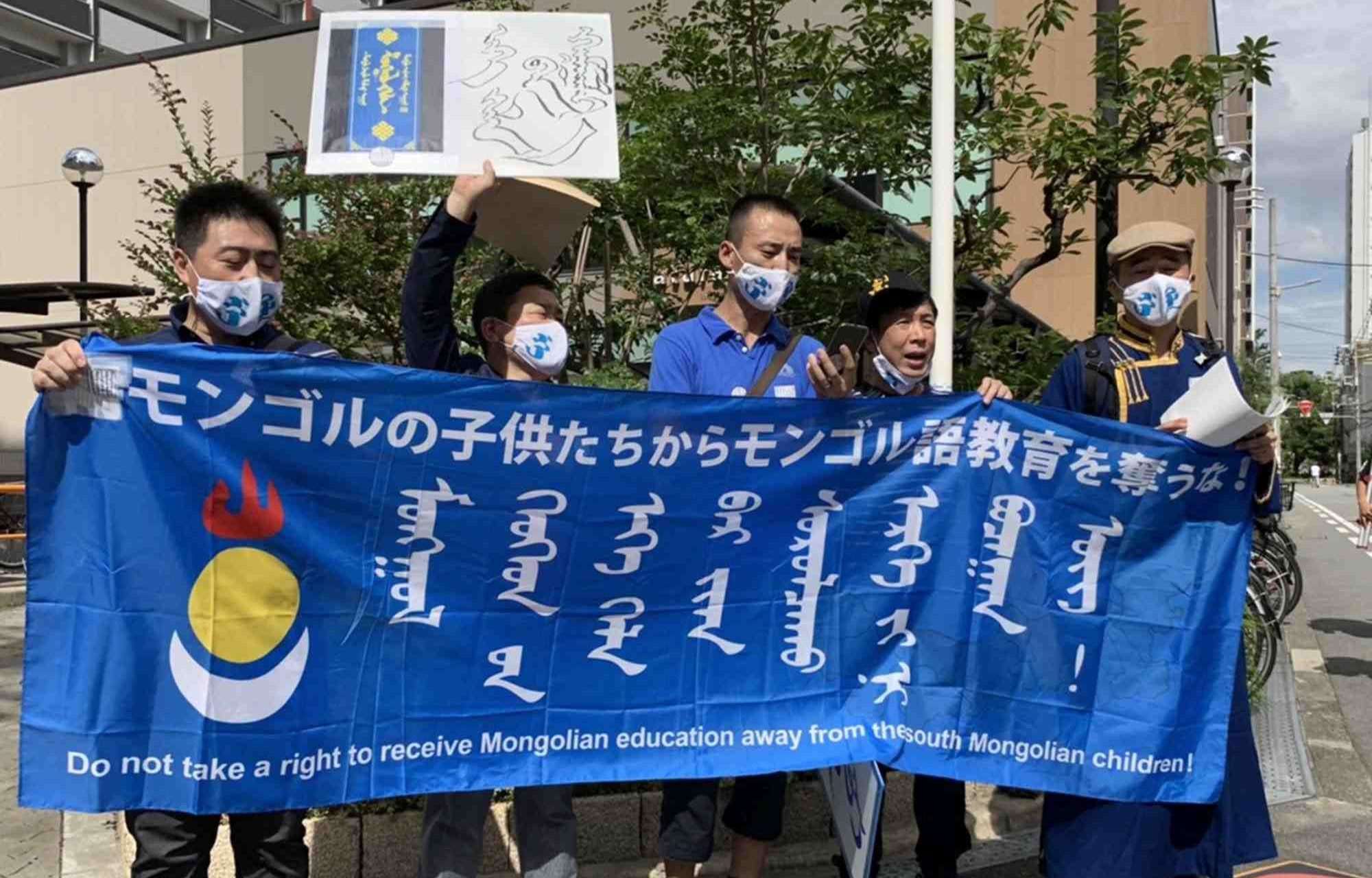 Inner Mongolians seek recognition and help restoring their rights trampled upon by the Chinese Communist Party and Beijing government.

People from the Inner Mongolia Autonomous Region (IMAR) who live in Japan are being threatened by the Chinese authorities, and are urging Japan to help out.

The threat comes in line with China’s “policy of deprivation” in IMAR, under which Mongolian language and culture are being attacked. Predictably, China is trying to stop information from spreading on its persecution of human rights in IMAR.

Yet, parts of the region have deep historical links with Japan. And people from the area want Japan to act firmly against China’s violation of human rights.

“We want to inform Japanese people about the severity of the persecution in Southern Mongolia. We want to join forces with people in Japan, and fight together with Hong Kong, Tibet, and the Uyghur people.”

The above statement was made by one of the Inner Mongolian participants in a demonstration near the Chinese Embassy in Nishi Azabu, Tokyo, on May 9.

The organization in charge of the protest delivered a statement to the Embassy demanding a revival of school lessons in Mongolian, in addition to suspension of the policy encouraging the migration of Han Chinese to IMAR.

The cultural genocide crisis in IMAR, where about 25 million people live, is worsening.

In June 2020, the Chinese government decided on a policy to abolish Mongolian language learning in IMAR, and in the autumn of 2020, elementary and junior high schools in the region switched from using textbooks in Mongolian to those in Mandarin Chinese.

Hanging portraits of Genghis Khan, the founder of the Mongol Empire, in schools has become restricted. Inner Mongolian parents and teachers have protested against the cultural crackdown, but in response, the Chinese authorities have merely strengthened their suppression.

According to the Southern Mongolian Human Rights Information Center in New York, about 10,000 Inner Mongolians have been imprisoned in IMAR.

On top of that, the Chinese authorities have cracked down against people from IMAR who live in Japan.

The Chinese authorities have sent officials to visit Inner Mongolian students in Japan and pressured them not to spread their opinions on the education crackdown in IMAR, according to Shizuoka University Professor Oghonos Chogtu. He is also head of the World Mongolian Federation, which aims to protect Mongolian culture.

Furthermore, Inner Mongolian students holding video chats with family back home have had their online family conversations suddenly interrupted by strangers who appear to be Chinese officials, who ask questions about the activities of people such as Oghonos Chogtu.

Even before the crackdown on Mongolian language learning in IMAR, Inner Mongolians in Japan have been on the receiving end of unreasonable pressure from the Chinese authorities.

One Japanese resident from Inner Mongolia, who was researching self-government in China, was imprisoned for several days in the autonomous region merely for gathering research materials that are publicly available in China. He was apparently released on the condition that he would not take part in protests against the Chinese government and not talk to the Japanese media.

Another individual, an agricultural researcher who was studying vegetation in IMAR, was reportedly detained after returning to the region from Japan.

In addition, a student who has personally experienced being arrested in IMAR told the Sankei Shimbun: “The natural environment in IMAR has changed drastically as a result of over development by the Chinese Communist Party. If anyone tries to research natural science, sociology, or present-day Southern Mongolia, the Chinese authorities see that as an inconvenient, political problem.”

“My family lives in IMAR so I can’t even tell fellow Inner Mongolians in Japan that I’ve been arrested and tortured,” the student added.

Before World War II, part of IMAR was under Japanese control. There are still families in the region who follow Japanese customs, such as making miso from soy beans in spring. These families are said to be fond of Japan. Yet Japan’s concern about the plight in IMAR seems to be inferior to its concern regarding Hong Kong and Xinjiang.

“From Japan’s point of view, its historical association with Inner Mongolia could be seen as somewhat negative – so it might not want to focus on the region. However, we are not after any apologies or compensation from Japan,” explains Oghonos Chogtu.

Nevertheless, China’s assimilation policies in IMAR are showing no signs of slowing down. There has been a widespread backlash against the language-related policies that started in fall 2020. But in March 2021, President Xi Jinping took part in a meeting attended by IMAR representatives and issued the instruction that Mandarin be spread across the region, and that any criticism be shut down.

In Japan, there are parliamentary groups that support people in Xinjiang, Tibet, and Hong Kong. But there has been no real equivalent for IMAR.

However, Japanese politicians Hiroshi Yamada and Hiroshi Ueno, who were classmates of former Mongolian president Tsakhiagiin Elbegdorj at Harvard University, have shone light on the issue.

In March 2021, Yamada and Ueno invited Oghonos Chogtu to take part in an event on the situation in IMAR and its historical connection with Japan. A month later, on April 21, an IMAR support group was set up, with the former Minister for Internal Affairs and Communications Sanae Takaichi as the leader.

Inner Mongolians in Japan had been wishing for this kind of action for about 10 years.

“Japan is finally taking action. The souls of Inner Mongolians killed during the Chinese Cultural Revolution are rejoicing in heaven.”

In celebration of these political developments in Japan, a group of Inner Mongolians recently gathered at a Mongolian restaurant in Tokyo’s Shinjuku district, where they feasted on mutton. The gathering was emotional and a few tears were shed.

“The issue of human rights is not a domestic issue. It is an international one. We want Japan to create a human rights law that can tackle the human rights (and sanction Chinese officials involved in their suppression) in IMAR,” says a senior official from the Southern Mongolia Congress.

Inner Mongolians in Japan are hopeful that Japanese political parties can work together and somehow help improve the worrisome situation.