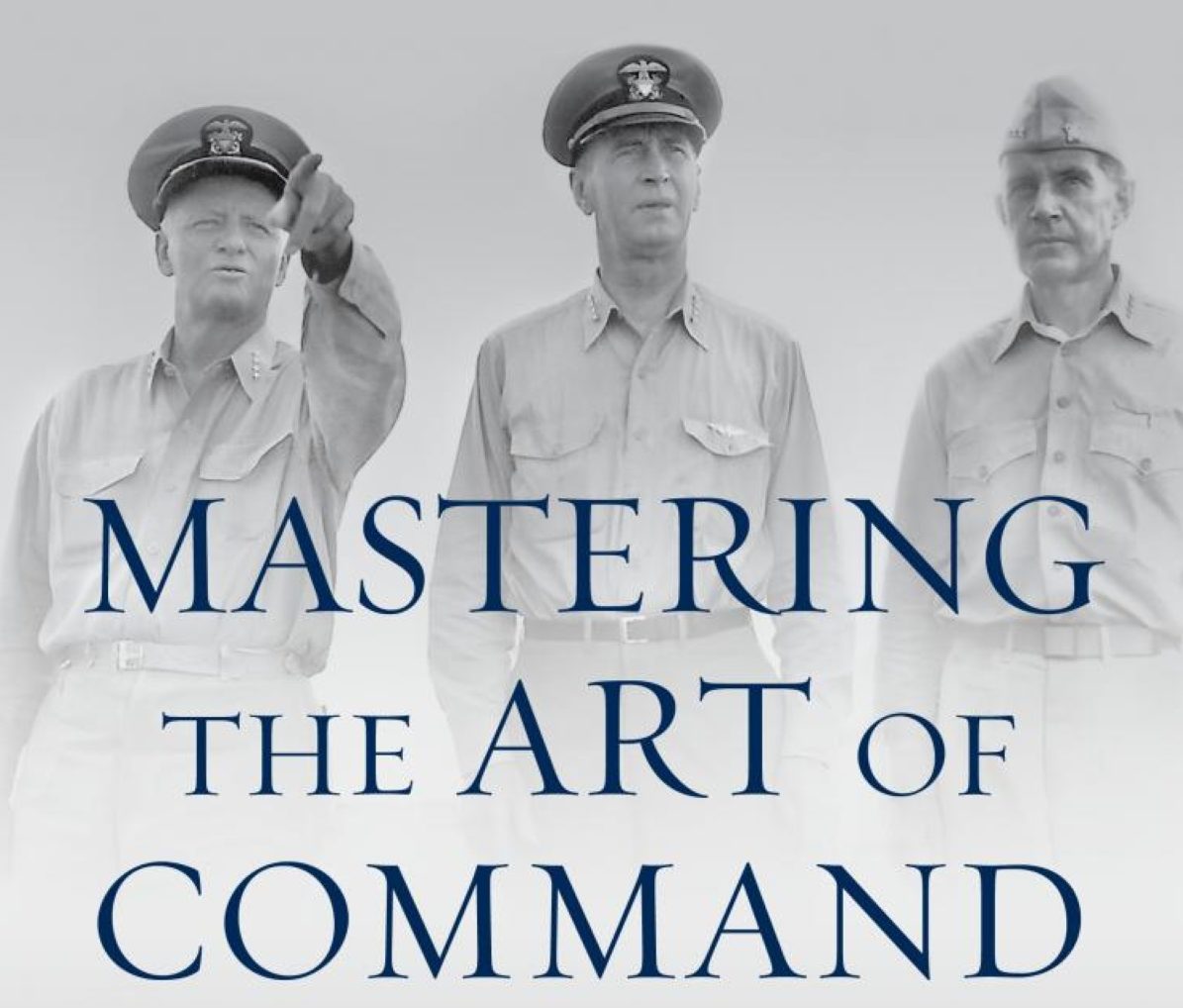 Book Cover: Mastering the Art of Command by Trent Hone

Naval historian Trent Hone examines the war in the Pacific through the command of Admiral Chester Nimitz and the lens of organizational behavior.  The result  is a formidable work of scholarship, weaving together the numerous campaigns in the South Pacific and the Aleutians and detailing the sundry campaigns, the personalities involved in each, and the strategies pursued by each side.

The war in the Pacific was fought on an enormous canvas, and the author has gone to considerable effort to make the narrative as clear as possible. At the front of the book is a list of abbreviations, and at relevant places throughout the text are numerous charts listing each major campaign, the military assets available for each, and maps of the where they occurred.

There are 44 pages of footnotes and a nine page bibliography in small font. And, as a bonus, a centerfold with  numerous photographs of the leading figures on the American side.

Inside the Story as Hone Tells It

As the book opens, Commander in Chief of the United States Pacific Fleet Admiral Husband Kimmel’s defense plans have been destroyed both literally and figuratively by the tactical surprise of the December 7 1941 attack on Pearl Harbor.

American shock was underscored by the discovery that a new strategic capability had been created in Japan’s First Air Fleet: the Kido Butai, which brought together three aircraft carrier divisions into what Hone describes as the single most powerful agglomeration of naval air power in the world. Conversely, Kimmel’s humiliation enhanced the reputation of Commander in Chief of the Imperial Japanese Navy (IJN) Isoroku Yamamoto, the architect of the attack and, ironically, an opponent of the war.

When the Kido Butai struck Oahu, it exposed an unanticipated American vulnerability ー the US had no effective response to Japan’s six carriers and more than four hundred aircraft that, it was said, could appear and disappear at will.

How to counter the Japanese behemoth would be the responsibility of Kimmel’s successor, Admiral Nimitz. Some success was desperately needed for both military and psychological reasons: the attack on Pearl Harbor had shattered morale. Hone’s narrative traces the cat-and-mouse game of strategy and counter-strategy as the US command tried to anticipate and prepare against Japanese moves, while Japanese strategists did the same.

The US got its morale boost in the form of an April 1942 surprise air attack on Tokyo known as the Doolittle Raid.  Though damage to Japanese military and industrial targets was slight, the raid had a major psychological effect, raising doubts about the ability of military leaders to defend the home islands.

Doolittle’s raid also pushed forward Yamamoto's plans to attack Midway Island in the Central Pacific. While cleverly conceived and, although the odds were in favor of the IJN, the battle turned into a decisive defeat at the hands of the US Navy.

Although Midway checked Japanese expansionism, the IJN remained a formidable force. Aware of the rapid switch of the American economy from relatively complacent peacetime mode to full-on war production, the Japanese hope was to destroy what was left of the American Pacific fleet after Pearl Harbor before new assets could be deployed.  The defeat also forced Yamamoto to pursue the kind of decisive battle strategy he had thus far tried to avoid.

The American response was to try to deny them the decisive battle and focus instead on attrition (p. 147). A crucial part of the “island hopping” strategy that would eventually end at Japan’s home islands was the deployment of US Marines to storm and take the selected islands.

The IJN suffered another defeat after the bloody 6 month battle of Guadalcanal in 1942-43, allowing the American forces to transition from defensive to offensive operations and in essence enabling them to seize the strategic initiative in the Pacific theater.

Yamamoto, hoping to boost morale and get a better picture of what was happening ー the emphasis on secrecy meant that losses were frequently concealed from decision makers in Tokyo (p. 112) ー decided on an inspection tour of Japanese bases in the Solomon Islands. This too turned into a disaster: US intelligence had decrypted a message containing his itinerary and shot down his plane, thereby further depressing morale.

Foe That Wouldn't Give Up

Although both sides suffered from shortages of military assets and fuel, the Japanese side was more affected, thereby underscoring Yamamoto’s pre-war observation that Japan’s hope for victory would be limited by time and oil.

In early 1944, Truk, the base of the IJN’s combined fleet and so strongly defended that it was referred to as the Gibraltar of the Pacific, was attacked with such force that Admiral Koga Mineichi, deprived of his cruiser screen and carrier air groups, decided not to risk his fleet in the Marshall Islands and withdrew his forces to Palau and Japan. And, in operations around the Philippines, Admiral Ozawa Jisaburo, with most of his planes lost, chose to withdraw rather than join battle.

Even with Japanese forces weakened and American forces attacking Okinawa, victory was not yet in sight. Despite deficiencies in men and materiel and the Japanese high command’s realization that an assault on the main islands of the country’s main islands was looming, they fought an aggressive delaying action with massed kamikaze attacks at sea and on land a network of caves, tunnels, and mutually supporting defense positions known as fukkaku.

For the Americans, the battle against a foe that would simply not give up indicated that an assault on the home islands would be still more bloody and draining. The US had other pressing concerns: the  Soviet Union, though technically an ally of the United States, had been precluded from entering the war due to a non-aggression pact with Japan that it gave notice it would terminate before the expiration date, indicating that it intended to invade, which neither the fiercely anti-communist Japanese government nor the fiercely anti-communist United States wanted.

With Japan exhausted but defiant, an end game had to be found quickly.


Unfortunate Omission of the Atomic Bombings

It is in its treatment of the conclusion of the war that the book falters, saying only that “When the Soviet Union struck, the  IJA resolved to fight on…meeting on the night of 9 August the emperor overruled the disagreement in his cabinet and sanctioned Allied surrender terms by claiming that if he did not act, ‘the Japanese race would perish’” (p. 338).

Incredibly, there is no mention of the atomic bombings.

While fear of the USSR was certainly a factor, the Soviets did not immediately invade. And when they did, it was in Manchuria rather than the Japanese home islands ー on August 9 ー the day that the second atomic bomb fell, this one on Nagasaki. For all the emperor and his cabinet knew, there would be more atomic bombings and the Japanese race would perish through incineration rather than Soviet invasion. Surely this should have been mentioned.

Other, more minor flaws, are that, while the author gives high marks to American intelligence there is no mention of the Navajo code talkers. This is despite the fact that, according to the Central Intelligence Agency, they participated in every major marine operation in the Pacific theater.

As well, the attempt to apply organizational theory as an analytical tool for success seems forced and largely irrelevant. At the beginning of the book, Hone praises the decision making techniques that the navy had developed in the interwar period of 1919-1939. Yet  the deficiencies of this attention to organizational planning resulted in the  catastrophic humiliation at Pearl Harbor.


Behind the Author's Hagiography

Also, readers may wonder about the usefulness of such memes as  socio-technical systems expert David Woods’ concept of “graceful extensibility,” defined as the ability of a system to extend its capacity to adapt when surprise events occur (p. 104). Similarly, the relevance of cybernetician W Ross Ashby’s Law that “the variety of stimuli impinging on a system must be countered by the variety of responses that the system can muster” (p. 343) is questionable, when common sense would indicate the same conclusions.

Throughout, Hone describes Nimitz as a believer in staff work, as opposed to the narcissistic and  autocratic General MacArthur. Nimitz is portrayed as well as a mediator among the conflicting desires of his subordinates. Taking nothing away from Nimitz’s accomplishments, however, there are times when Hone’s writing verges on the hagiographic, as when he cites a former subordinate’s assertion that the admiral was “able to perform as close to perfection as human limitations permit” (p. 354).

Notwithstanding, this is an impressive book and well worth reading for all those who are interested not only in World War II but in strategic decision making. And, in the what’s old is new again category, current events in the South Pacific underscore the importance of the area for today’s decision makers.

Title: Mastering the Art of Command: Admiral Chester W Nimitz and Victory in the Pacific

For More Information: See the publisher's web page on the book.

To Purchase the Book: From the publisher here. The book is also available from Amazon and other online and street booksellers

Find other reviews and essays by Dr Dreyer on unexpected facets of Japan here on JAPAN Forward.