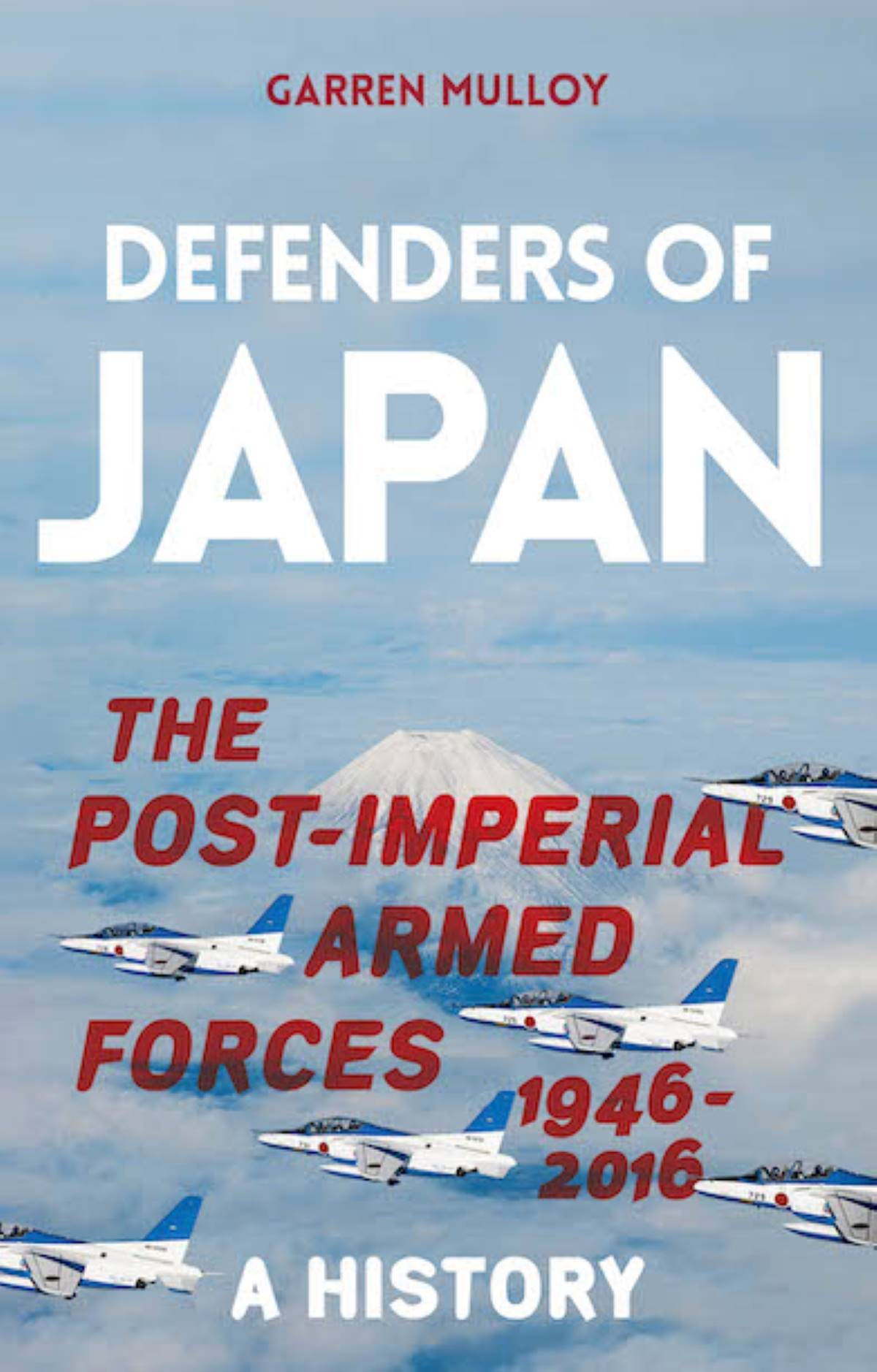 For those who seek a comprehensive treatment of Japan’s Self-Defense Force from the earliest days of its inception, rejoice: this is your book.  Author Mulloy, a professor of international relations at Daito Bunka University, draws together his previous research on this and related topics into an encyclopedic work.

There are eight pages of acronyms and 105 pages of footnotes, the latter in small font. And seemingly no topic escapes his scrutiny. He examines recruitment, training, educational programs, pay scales, the cultures of the respective forces, seriatim details of each peace-keeping operation, civil-military relations, and even numbers and kinds of weapons.

While this may not seem like a fun read, it actually is. Mulloy guides readers through the trajectory of development, informing us, for example, that, popular opinion to the contrary, imperialism did not transmute into pacifism overnight. Only three days after the Emperor’s surrender was broadcast, Japanese troops were ordered to defend the Kuril Islands against a Soviet invasion.

The British used Japanese Surrendered Personnel (JSP), who had retained their weapons and command structures, to maintain order for food production, infrastructure work, and ordinance disposal tasks. The last JSP were not repatriated until 1947, with the British attempting to prevent the survival of any written record of their experiences.

Nonetheless, newly sanitized liberal democratic Japan succeeded in creating a new security identity. The Japan Self-Defense Forces (SDFs) were formally founded in 1954 on the basis of a temporary National Police Agency despite persistent domestic opposition to the SDF’s legitimacy.

Although resistance to their right to exist extended to all the services, the Ground Self-Defense Forces, GSDF, had the most difficult time overcoming its imperial legacy due to stories of soldiers’ cruelty abroad.

The Maritime Self-Defense Force (MSDF), by contrast, displayed great pride in its heritage and has done so to this day.

As a new service, the Air Self-Defense Force (ASDF) was less encumbered with imperial legacy baggage, despite expressions of nostalgia for wartime pilots. Focused on the latest technology, the ASDF projected a glamorous image of a technically adept professional force committed to defending the skies.

The force took advantage of this to enhance its public image, with the ASDF’s Blue Impulse aerobatic display team delighting millions at public exhibitions beginning with its debut tracing of the five-ring Olympic symbol at the opening ceremony of the Tokyo games in 1964.

Signaling a rejection of the “little Japan” mentality, Minister for Foreign Affairs Kiichi Aichi declared in 1969 that the SDF was “guaranteeing the primary defense of Japan” with “firepower greater than that of the imperial forces at their wartime peak.” Others derided the statement as delusional hubris, with a Japan Defense Agency official commenting that he believed the GSDF and ASDF had only about half the resources and capabilities they required for defense, while the MSDF had about a third.

Not all problems involved issues among the three services: the 1976 fiasco with defecting Soviet pilot Viktor Belenko’s ability to avoid interception and land in Hakodate revealed serious problems of non-coordination among the SDFs, not only with each other but with civilian institutions. Improvements took place, albeit maddeningly slowly. According to Mulloy, by the 1980s, the GSDF was looking north while the MSDF looked south, and the ASDF did not know where it was looking.

Missteps notwithstanding, opposition to the existence of the SDF abated with time. By 1991, the author states, the Japanese had largely accepted, albeit not warmly embraced, their legitimacy. There was limited appetite for abolition, but no enthusiasm for SDF participation in United Nations peacekeeping operations (PKOs), characterized by Singaporean prime minister Lee Kwan Yew as tantamount to offering chocolate-covered liquor to a former alcoholic.

Happily, the usually astute Lee was wrong on this prediction.  The PKOs were a learning experience for the SDF, with some more successful than others. But — contrary to the allegations of the People’s Republic of China (PRC) propagandists — they did not begin a slippery slide toward the militarist regime of a century earlier.

An important milestone in the domestic acceptance of the legitimacy of the SDF was achieved with the response to the March 11, 2011 (3.11) triple crisis of earthquake, tsunami, and nuclear meltdown. Throughout the rescue, relief, and recovery phases, the SDF were prominent actors, closely cooperating with domestic civil and overseas organizations.

Despite weaknesses in heavy airlift and amphibious capabilities, the forces’ extensive experience in water purification, bathing, cooking, and logistical equipment proved invaluable and were gratefully acknowledged by survivors. Heavy participation of United States personnel, military and otherwise, in Operation Tomodachi (Friendship) also helped to soothe sentiment against the continued presence of the American military on Japanese soil.

With the disintegration of the Soviet Union, the rise of an increasingly assertive China drew the attention of defense planners, though Mulloy seems curiously hesitant to address this or its implications for defense planning.  Thus we hear about the aircraft carrier Minsk ending up as a tourist attraction in Jiangsu, but nothing at all about the Varyag being commissioned as the PRC’s first carrier and the forerunner of several indigenously produced siblings.

The collision between a Chinese fishing boat and two Japanese Coast Guard vessels off the Senkaku Islands is described as “trivial” (p. 196), when indeed it was not, being the impetus for Beijing declaring that henceforth it would defend its alleged rights to the Japanese-controlled islands, and gradually expanding its presence there. Later, Mulloy briefly mentions the Japanese government’s purchase of several of the islands without adequately addressing the background. Surprisingly, the word Senkaku does not appear in the book’s voluminous index.

On other matters, there was nothing “mysterious” about the Midterm Defense Program’s decision to assign the Aegis Ashore to the GSDF rather than the MSDF (p. 198) since the latter was severely overstretched. According to Colonel Grant Newsham, whom the author cites elsewhere in the book, the services were fighting for a too-small pot of money, and having to spend its limited share on something on shore was not an attractive prospect for the MSDF, which already felt overwhelmed by the Chinese in the East China Sea.

The statement about China being able to avoid military confrontations beyond minor conflicts since the Five Principles of Peaceful Coexistence have significantly influenced its security doctrine (p. 168) betrays an alarming lack of awareness of the gap between Beijing’s principle of non-interference in the domestic affairs of other states and its actual practice thereof.

Given the eagerness with which Japan repeatedly seeks US support for its disputes with China over disputed territories, one must wonder about the author’s failure to examine John Mearsheimer’s description of a Japan caught between competing hegemonic powers (p. 177). An alternate explanation: in trying to extract maximum benefit from its economic relationship with the PRC while relying on the United States as guarantor of its security, Japan is trying to have its cake and eat it too.

Mulloy was rightly skeptical of Prime Minister Shinzō Abe’s (pp. 191-192) statement that Japan is back—since Abe did not say back from where, how he planned to do it, or for what purpose. Mulloy got his answer a few years later, remarking that few would have imagined that, against determined opposition, Abe’s controversial security laws would so rapidly pass, “in the land of glacial reform and conflict avoidance.” (p. 204)

Such reservations aside, Mulloy’s work admirably summarizes the transformation of the SDF from its founding as an uncomfortable anomaly in the post-war post-imperial era into a representative of modern liberal-internationalist Japan.

It is unlikely that any of the veterans who were repatriated after the war would have imagined that their country would have become so peaceful and prosperous, nor that it would be so respected in a society that does not want a large military and has been decidedly unenthusiastic about entering service-related professions. Post-war foreign minister, Hiroshi Ashida’s wish for a refounded military acceptable to the Japanese people, has largely been realized.

Most likely because a half-century period provides an appropriate point for analysis, the author has chosen 2016 as the endpoint of his study. Yet, as he would agree, Japan’s defense continues to evolve, and readers can hope that Mulloy is already at work on providing a sequel.

To purchase the Book: The book may be purchased directly from the publisher here or on Amazon here, and at other booksellers.

(No Japanese translation of this book review is available yet.)

Find other reviews and essays by Dr. Dreyer on unexpected facets of Japan here on JAPAN Forward.