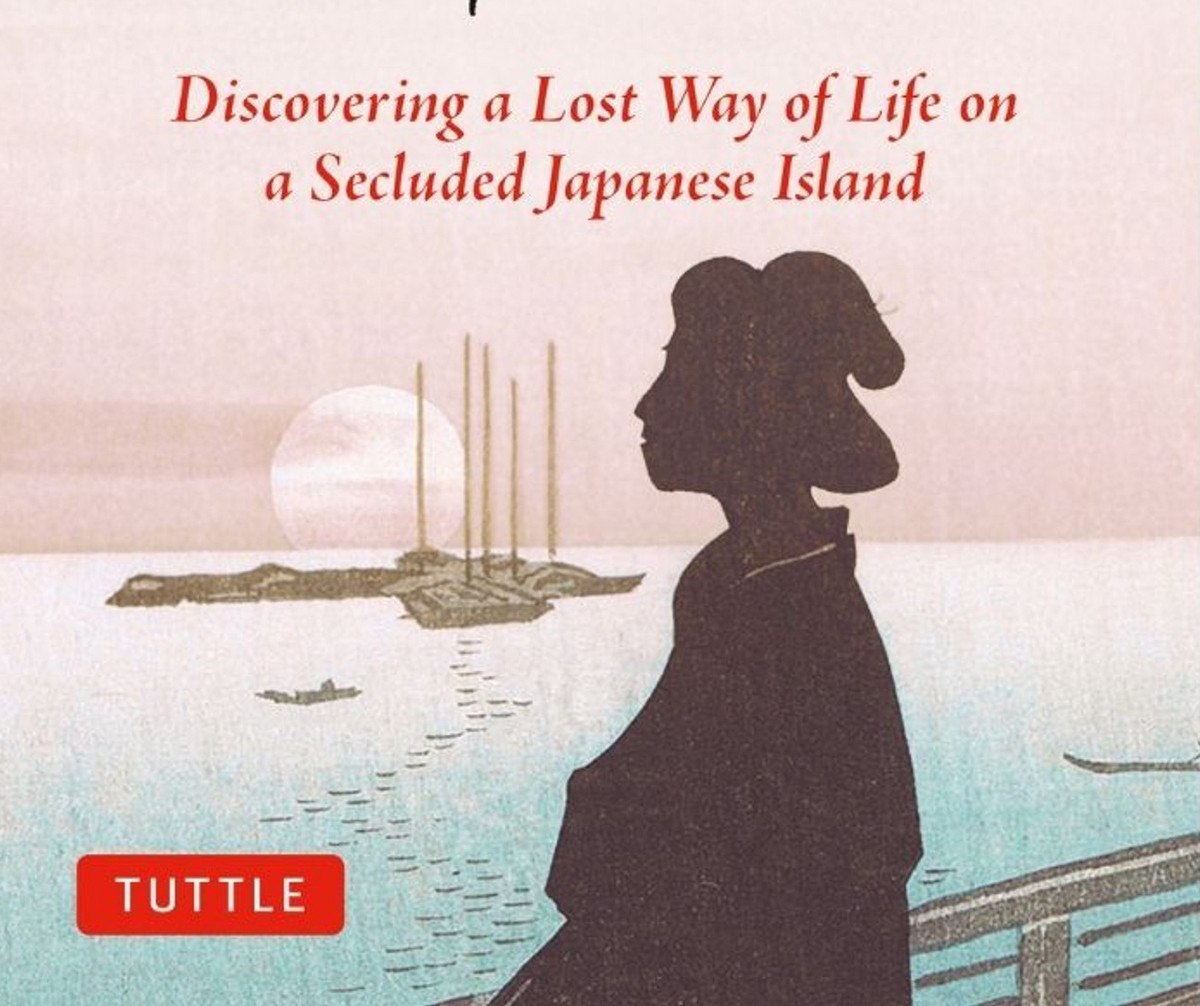 From the cover of the book, "The Widow, The Priest and The Octopus Hunter" by Amy Chavez (Tuttle)

Many dream of enjoying the communal bonds of village life in a culturally rich country. Few follow through. Even fewer have the ability and inclination to document the experience in an informative and articulate way.

One such individual is American Amy Chavez, who has spent the past twenty-five years as a resident of Shiraishi Island, located within the Seto Inland Sea. The Widow, The Priest and The Octopus Hunter (Tuttle Publishing, 2022) is her account of the island’s people, culture and past.

Shiraishi Island began its “modern” life when appropriated by the lord of nearby Fukuyama as grazing land for his horses in the seventeenth century. A port was constructed from 1682-1691.

A reclamation project, commencing in 1694, turned 20 hectares of tidal land into pasture. The fishing industry thrived, stone quarrying boomed and the reclaimed land enabled food self sufficiency for the growing community.

A ferry and tourists arrived in the early twentieth century. The population grew to over two thousand souls.

The War, The Postwar Boom and the Mainland Migration

War intervened, denuding the island of more than one hundred men and creating a significant number of war widows, who then commonly married the younger brothers of their deceased husbands. Large families were the postwar norm, but the industrial boom drew school graduates away.

The elementary school closed. Then, the junior high school, too. After the elderly resident doctor passed away, a doctor comes twice a week from the mainland. The emergency charter boat no longer runs, compelling the island’s elderly to move into mainland-based nursing care earlier than they may otherwise have done.

Much might transpire regarding the future of the island over the coming years, but one thing is clear: if the population continues to fall, wild boars will claim it as their own. They first reached the island in 2014. Their numbers continue to rise as the resident population correspondingly falls. It has slumped to a mere 380, decreasing at a rate of around 20 persons a year.

As the title suggests, The Widow, the Priest and the Octopus Hunter delves into the lives of the characters who inhabit the island ー and their nearly one hundred years of recollections. It is a tight community and the islanders are often related through multiple family lines. Therefore, far from being a disparate collection of pen portraits, their stories frequently intertwine.

A dominant unifying thread is the memory of Eiko, the war widow whose house Chavez initially rented in 1997 and would subsequently buy in 2003 after Eiko passed away. The house was rented “as is,” including many of the war widow’s personal effects. After purchasing the house, Chavez would slowly sort through the boxed up keepsakes of Eiko’s life, from which much would be revealed.

For a favorite pen portrait, it is hard to go past Taiko, mother of eleven, whose tales of extracting payback on her philandering husband left everyone at an oyster party in stitches. “He’s probably up there looking down at us, laughing,” she concedes. “But he’s not here, so I can say anything I want”.

Taiko, it would seem, is one of few people on the island not known by a moniker denoting her profession or the location of her residence. Ishibashi no obachan (the stone bridge lady) lives in a house for which one must pass over a small stone bridge. Panken (bread Ken) is the son of a baker.

A Mama-san to Remember

To be known by the sobriquet, “Mama-san,” one could only have had a particularly eminent occupation and status. And Mama-san was indeed “the best known woman on the island." The manager of one of the island’s premier Japanese inns, she ran it “with an iron fist”, doing most of the cooking herself.

Chavez made several attempts to acquire an interview through intermediaries before deciding there was little to lose from knocking on the front door. Mama-san welcomed her “with the brightest smile.” As if expecting her, she launched into her personal history before Chavez had asked a single question.

An imported bride from neighboring Kitagi Island, Mama-san’s arrival in full bridal regalia was a sensation, as all agreed she was more beautiful than any woman on Shiraishi at the time. Despite her moniker and fame, Mama-san would nonetheless claim that devoid of resident cousins and former school year classmates, she had lived on the island as an outsider.

When Chavez concluded the interview, Mama-san foisted some wedding photos into her hands, “the only copies” of them that she had. Chavez politely refused, but the island’s dominant matriarch was not to be denied. The photos were delivered to Chavez’s home the following day and featured in the book’s photo inserts, as Mama-san most surely desired.

“Only the boulders and mountains on this island will be witness to what was,” writes Chavez in her introduction. True enough, but Mama-san was not of the type to go gentle into that good night.

Within the assorted pen portraits, much can be learned about the culture of traditional Japan. Some stories will be familiar to those with knowledge of Japanese culture. Much will likely be not. Some are unique to the island itself.

The standard practice of the adoption of nephews or nieces into childless families was common upon the island. In addition, a non-custody form of adoption called fude no oya, also took place.

Guardians under the fude no oya system were similar to Western godparents. They became legal guardians in the event of the death of the biological parents, but would also assist with other matters of upbringing, including the finding of marriage partners under the culture of arranged marriages.

Prominent members of the community were actively sought as fude no oya parents. The island doctor was guardian to no less than ten of the island’s children.

A further island tradition was the goma fire ceremony at which residents could throw out and have burned important personal items which they couldn’t bear to discard with their kitchen trash.

A firm island belief was the existence of hitodama, a disembodied soul that looks like a fireball. Too many claim to have seen them for their existence to be scoffed at or denied. All upon the island accepted they are real.

My one frustration with The Widow, The Priest and The Octopus Hunter concerns the final pen portrait, a chapter on Eiko, Chavez’s former landlady. Mysteries emerge about her as the pages of the book are turned. Having long since passed away, Eiko’s life story is dealt with by Chavez through a phantom “interview” in which she speculates on what may have occurred. It is preceded by a brief three line preamble.

Chavez’s preferred answer to a particularly key question, however, while not at all unlikely, pays little heed to a considerable number of related snippets that might logically lead one to expect an alternative answer. The phantom interview could have benefitted from a more substantial preamble in which the snippets were restated and the two main possibilities acknowledged.

The Keeper of the Graves

In addition to chapters on the obvious island candidates, there are some that were sourced from accidental encounters. A particularly moving chapter, Keeper of the Graves, was one of these.

Chavez journeyed to the island cemetery during the summer Obon period, when relatives attend to their ancestors' graves. She came across an old woman struggling to deal with the weight of the water buckets and irregular stone steps. Chavez assisted the women in the manner that would ordinarily have been performed by a younger relative.

“I am happy to help you. Very happy actually” Chavez replies, before adding with proper Japanese self-depreciation, “I’m quite useless.”

A Bounty of Privilege

Self-depreciation is a component of Japanese manners, of which there is a further, yet unintended, example in the forward of the book.

Chavez concedes to having been born into a world of privilege — of having taken her horse to boarding school. “I find myself again in a position of privilege” she then writes, to be living “among these extraordinary people”, a people “who refuse to reinvent themselves, and to which, therefore, the city holds no lure.”

After twenty-five years of residency on Shiraishi Island, however, what Chavez possesses is hers by a large measure of right. The privilege is enjoyed by the Shiraishi community, whose way of life on a picturesque island, within the Seto Inland Sea, has been eloquently chronicled for ever more.

Four and a half stars and a bonus for its social contribution as an invaluable oral history. Let’s call it a five. The Widow, The Priest and The Octopus Hunter is a book that deserves to be read, remembered and remain in print.

Title:  The Widow, The Priest and The Octopus Hunter

For more information: Visit the publisher's review of the book, here.

To purchase the book:  From the publisher, here. (Also available from Amazon and other online booksellers.)

Author: Paul de Vries
Find other reviews and articles by the author on Asia Pacific history at this link.