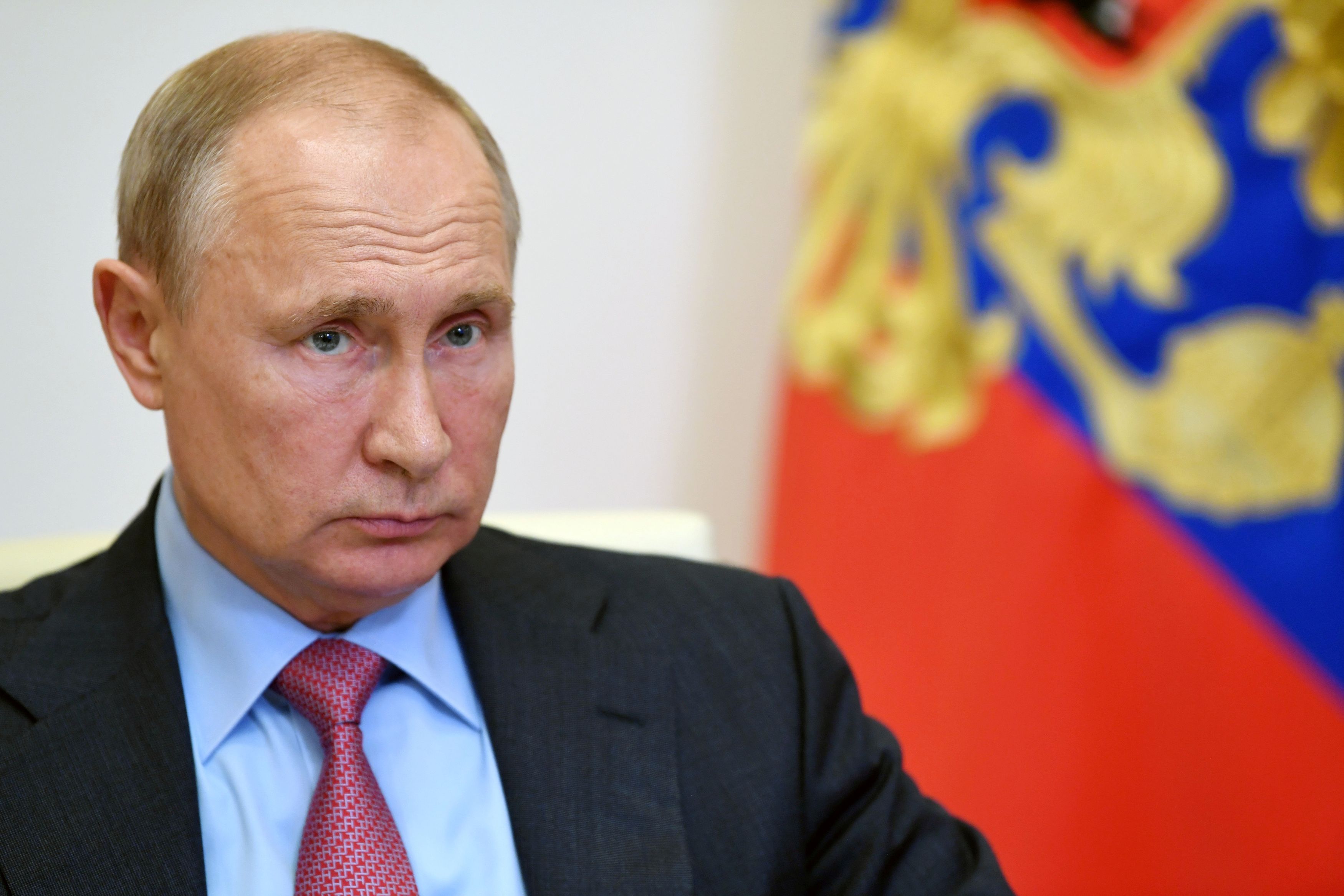 Every August, Japan holds a series of remembrances, including the Hiroshima and Nagasaki atomic bombings, and the August 15th end-of-war announcement. But one date is frequently overlooked — the anniversary of the Soviet Union’s theft of Japan’s Northern Territories and implementation of a plan to illegally imprison and use Japanese prisoners of war (POWs) as slave labor.

The Soviet Union declared war on Japan at 11 P.M. on August 8, 1945, two and a half days after the atomic bombing of Hiroshima. Immediately following, a few minutes after midnight on August 9 and just before the Nagasaki bombing, the Union of Soviet Socialist RepublicS (USSR) sent one million men into Manchuria.

Japan formally accepted the Potsdam Declaration on August 10 and signed the documents of surrender on August 15.

Promptly thereafter, the Soviet Union began its invasion of the southern Kuriles on August 18. It did not invade the four islands that make up Japan’s Northern Territories until September 2.

Following the surrender in the field of the Japanese military forces after the war’s end, the Soviet Union conducted the forced incarceration of more than 600,000 Japanese POWs, who were taken from Manchuria and other locations to Siberia to work as slave labor for Josef Stalin. The last Japanese POWs returned home only in 1952, some seven years after the war ended. Over 60,000 Japanese POWs died in the Siberian slave labor camps, many of them several years after World War II itself was over.

While Stalin’s actions were war crimes, as confirmed in the Nuremberg and the Tokyo War Crimes Trials, the Soviet Union and its leadership have never been held legally accountable.

Today, Russia insists that the Northern Territories are war booty. But what war?

In the Tokyo War Crimes Trials, there was an attempt by the American defense attorneys for the accused to have the Tokyo Tribunal review whether the attacks by the Soviet Union in August 1945 were not an illegal war of aggression perpetrated by the USSR against Japan. These were mirror images of the charges the tribunal had filed against Japan for its attacks on the United States and against various western countries’ colonial possessions in Asia.

Not surprisingly, given the immediate post-war period when there was some hope among the Allies that Stalin might be reasonable, the tribunal rejected these claims.

Within a few years, the perspective of the parties had all changed. However, it was too late to stop the Soviet Union’s theft of Japan’s Northern Territories. Moreover, they have never paid reparations for the illegal forced labor of those POWs who were held for up to seven years, or for the 60,000 POWs who needlessly died.

How Did We Get There?

The Russo-Japan Treaty of 1855 set the boundary between Japan’s Etorofu Island and Russia’s Uruppu Island in the Kurile Island group.

After agreeing to the United States’ demands in 1855 to open Japanese ports to trade, the next western power in line was Czarist Russia. As part of an agreement to open three ports in Japan to Czarist Russia (Treaty of Shimoda), Japan and Russia also confirmed the border between them as follows:

The border was established between Etorofu and Uruppu islands. The island of Sakhalin, however, was left under joint ownership, with Japan being generally in the southern portion and Russia in the northern.

Sakhalin continued to generate various disputes among the occupants. So, in 1875 in Petersburg, the Meiji government entered into a new treaty, Treaty for the Exchange of Sakhalin for the Kurile Islands (1875) with Czarist Russia under which Japan gave up all rights to Sakhalin in exchange for Russia giving up all rights to the Kurile Islands chain (see map). The boundary between the two countries was set in Article 2, as follows:

... and the boundary between the Empires of Japan and Russia in these areas shall pass through the Strait between Cape Lopatka of the Peninsula of Kamchatka and the island of Shumushu.

Both treaties were conducted in times of peace for the furtherance of friendly relations between the countries. 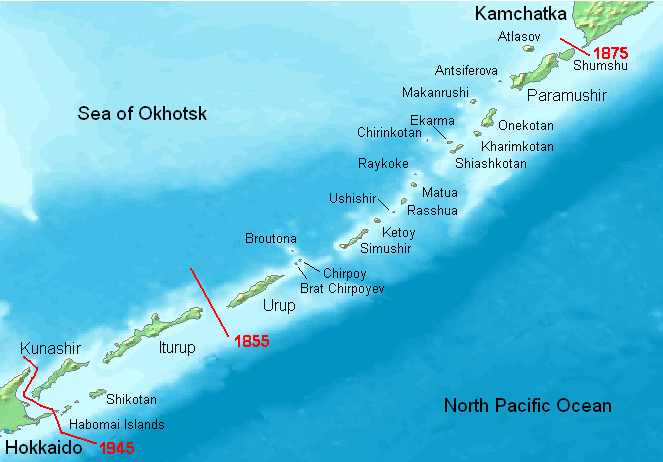 Japan and Czarist Russia fought a war from 1904 to 1905. It was actually to settle a rivalry between them for colonial dominance on the Korean Peninsula and in Manchuria.

In 1898, Russia pressured China’s Qing Dynasty into granting it a lease for Port Arthur (now Lüshun) in southern Manchuria. Russia then occupied the peninsula. The international community accepted this, even though in concert with other European powers, Russia had forced Japan to relinquish just such a right after Japan’s decisive victory over China in the Sino-Japan War of 1894 to 1895.

In the short but exceedingly bloody 1904-1905 war, Japan defeated Russia. In the Peace Treaty of Portsmouth, mediated by U.S. President Theodore Roosevelt, Russia relinquished the southern half of Sakhalin Island and exited northern Korea and southern Manchuria. (Russia had occupied northern Korea and a large portion of northeastern China as its colonies in this period.)

From 1905 to 1945, there were only two border clashes between Japan and the Soviet Union, which took place in 1938 and 1939. Japan was defeated in both, and an agreement signed in mid-1940 formally resolved both incidents. The USSR and Japan then entered into the non-aggression pact in April 1941.

There was no war between the USSR and Japan from 1941 to 1945, until August 8, 1945, when the Soviet Union unilaterally ripped up the non-aggression pact one year before its expiration in 1946 and declared war on Japan. Soviet forces then invaded Sakhalin after Japan's surrender and followed the Kurile chain, arriving in the four islands of the Northern Territories in early September 1945.

Stalin’s next objective was to invade Hokkaido and attempt to force the Allies into a partition of Japan, like Germany. U.S. President Harry Truman did not view that option kindly, and forced a halt to Stalin’s advance.

The San Francisco Treaty of 1952, which was intended to resolve all matters associated with the Pacific aspects of World War II, required Japan to return all territory it had won in the wars from 1931 to 1945. But in Article 2 (c), the Allies also allowed the Soviet Union to regain the territory it had lost in 1905.

The sovereignty of the four islands that make up the Northern Territories, however, was peacefully settled in 1855. They were never part of the Kurile Islands, never played any factor in the 1904-1905 war or WWII, and were never administered by Russia before 1945.

After its invasion, USSR forcibly deported 17,000 Japanese residents in 1949. The San Francisco Treaty refused to recognize the USSR’s claims to the Northern Territories.

This article is not a defense of the suffering that Japan inflicted on its neighbors during WWII. For that, as the Heisei Emperor declared on the 70th War Memorial service, Japan will always have “deep remorse.”

But, as between Russia and Japan, the history is clear. Russia is not, and never has been, an injured party in the Pacific War. The four islands of the Northern Territories can easily be seen just off the coast of Hokkaido. I have been there myself. The residents of the four islands, forcibly deported, left behind their homes, businesses, and family burial plots, which to the Japanese are incredibly important.

Russia has never paid reparations to those 600,000 POWs who worked in slave labor camps for up to seven years, all after the war had ended. Nor did it compensate for the lives of the 60,000 POWs taken by it after the war’s end who never came home.

For Russia, this theft is casually waved off as war booty for a war they conducted after Japan had already surrendered. For an island nation like Japan, every island is essential. And as a result, after 75 years, there is no peace treaty between Russia and Japan.