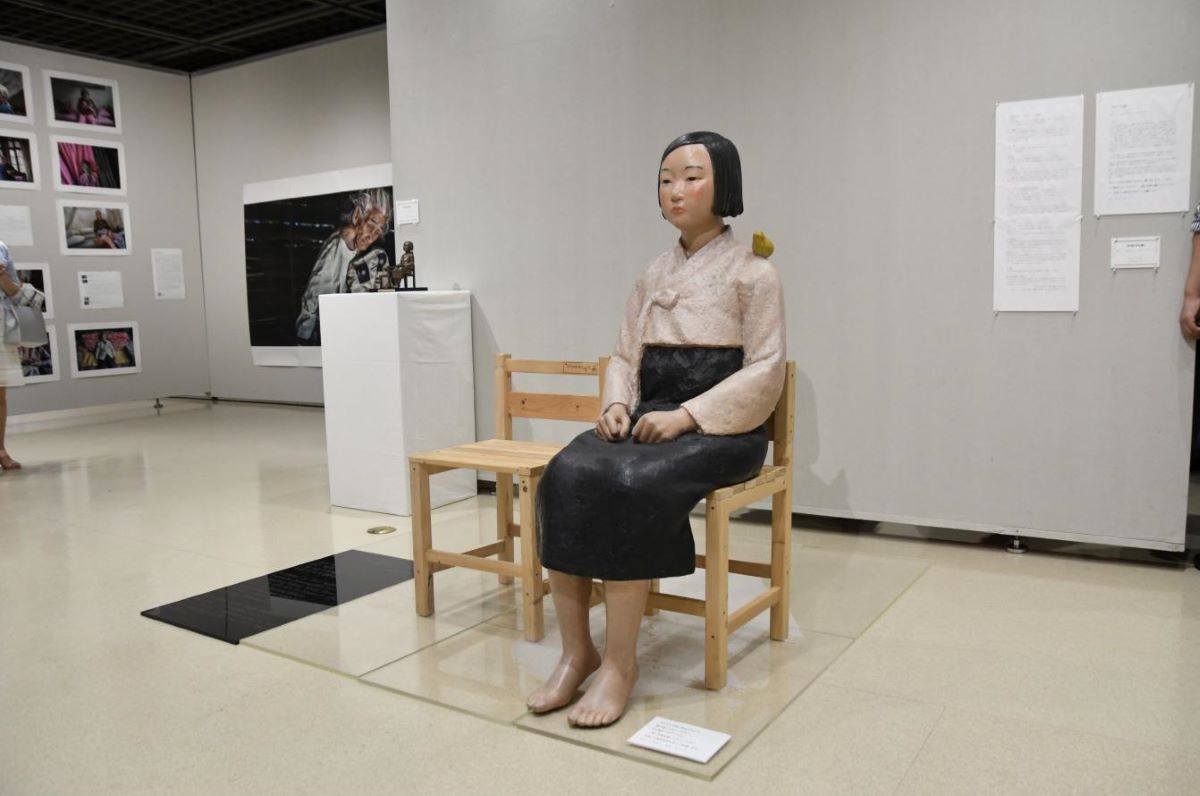 Entitled “Our own ‘Non Freedom of Expression Thereafter,” the August 25-28 exhibition in Nagoya was a follow-up to the Aichi Triennale held in 2019, a government-funded gala forced to close prematurely amid security concerns from right-wing activists.

A particularly contentious collection this time involved the “Statue of Peace,” a five-foot monument of a juvenile girl seated in a wooden chair. Designed by a sculpture duo in Korea, it represents budding Chosun women who were allegedly dragooned and sexually enslaved by the Japanese military under its colonial rule — euphemistically referred to as “comfort women.”

The issue of comfort women has been broadly disputed and has remained an unresolved conundrum between Japan and Korea for many decades. No scholarly consensus has been reached on the precise definition or the approximate number of women involved.

The Japanese government believes the issue was settled under the 1965 Basic Treaty and the 2015 “comfort women” deal. Its counterpart has been reluctant to accept this position. Consequently, a rapprochement over this historical problem has shown little progress, especially since the former South Korean Moon Jae In administration refused to enforce the bilateral agreement signed in 2015.

Freedom of Expression and the Battle for Truth

Notwithstanding much criticism, the event planners decided to showcase the statue and an equally controversial film of Emperor Hirohito’s image being scorched to ashes in a four-day scheduled event at the Citizens’ Gallery Sakae in Nagoya.

Since 2019, many Nagoya locals and even Mayor Takahashi Kawamura have challenged the legitimacy of the organizer’s motive and whether such “artwork” qualifies as freedom of expression. Moreover, many still grapple with how far speech rights ー often prone to abuse ー should be tolerated in a liberal-democratic society.

Kim Byungheon, director of the National Movement to End Comfort Women Law, a civic group in Korea, shares the sentiment of Nagoya locals. Formed in 2020, the NMECWL is a grassroots organization that advocates against comfort women fraud and the proliferation of the “Statues of Peace” at home and abroad.

Korean Scholars’ View of the Exhibition

From August 25-28, three members traveled to Nagoya to protest against the organizers and demand the monument be pulled from the venue.

Kim Byungheon, who toured the paid exhibit on his second day (August 26), felt utterly stunned by what he considered the Japanese organizers’ deliberate attempt to desecrate their own national history and defame their ancestors. He was particularly perturbed to learn that the coordinators had invited the sculptors Kim Seo-kyung and Kim Eun-sung via zoom for an hour-long exclusive talk show.

During the Q&A session, Kim Byungheon asked the artists to provide evidence that the Japanese military sexually enslaved and occasionally murdered young Chosun girls. In response, Kim Eun-sung, borrowing the words of a comfort woman activist, exclaimed: “My testimony is the evidence, you fool!”

Whether that profanity was directed at the questioner is unclear, but it did not adequately address a thoroughly complex historical problem.

The NMECWL campaigners also submitted a letter to the mayor’s office and held a press conference attended by some four dozen audience members, including major Japanese media.

A meeting with the mayor of Nagoya initially appeared plausible, but the mayor’s office turned it down at the last minute for undisclosed reasons. An insider told JAPAN Forward that while the mayor supported the meeting, certain members of the city hall vehemently objected, saying they wanted to avoid confrontation between left and right-wing activists.

At the press conference, Kim Byungheon rebutted the many erroneous claims on “promise engraved on an empty chair,” a designer’s note published by the sculptor duo in 2016.

Justifying Falsehoods in the Name of Art

The authors of the note claimed that the girl in the wooden chair was modeled after their 11-year-old daughter to depict youthful Chosun women who were abducted and coerced into sex slaves.

They further asserted the Statue of Peace was “social art” that reflected the nationalistic sentiment and a feeling of unresolved grievance against injustices suffered by Koreans under the administration of the Japanese. (Their book was translated into Japanese in 2021 and was available at the exhibit for approximately $16 USD.)

Comfort Women were professionals in a wartime sex industry and required by Japanese law to be above 17. Likewise, no historical records indicate such atrocious crimes being committed against these women by the Japanese military or that the top echelon made corresponding orders. The Statue of Peace is merely an embodiment of falsehood, utilized by the sculptors and the Korea Council (largest comfort women advocacy group) to breed comfort women scams.

“I cannot, in good conscience, stand idly by when my people and the international community, primarily the younger generation, are being deceived by such malicious propaganda,” added Kim.

Park Se-Won, a senior researcher at NMECWL, has examined all eight volumes of testimonials of former comfort women issued by the Korea Council.

“The biggest culprit was poverty and destitution, not the Japanese military. In the vast majority of the cases, women blamed their parents for selling them in exchange for easy money or brokers for deceiving them,” she concluded.

When the artists’ note was published, the Statue of Peace, costing $30,000 USD per figure, had been erected in numerous cities across Korea and exported to at least half a dozen locations globally. Today in 2022, 144 statues are officially established in Korea (the most recent was newly erected at Chungnam National University on August 15, 2022), with 34 overseas, including one recently unveiled at Kassel University in Germany.

“Nowhere in the world would one find such a relentless proliferation of identical statues aside from Kim Il Sung and Kim Jeong Il’s monuments in North Korea. This sort of worshiping behavior, almost like religious fervor, is unprecedented even among authoritarian or communist regimes,” said Kim Byungheon.

Perhaps what most infuriated many Japanese and Korean critics was the free pass granted to the host in displaying just about anything under the facade of freedom of expression.

Yumiko Yamamoto of Nadeshiko Action, a Japanese civic group, said: “Make no mistake, even unsavory exhibits should have their venue free of violent threat. But when an artwork disseminates outright fallacious information that in turn vilifies our country, that’s a cause for deep concern.”

To Kim Byungheon’s surprise, he quickly discovered while scouring the room that the “chef-d’oeuvre” of the exhibit was, in fact, a film of Emperor Hirohito’s image in a blazing fire and not the statue itself. Nobuyuki Oura, the filmmaker responsible for the footage played on a 50-inch screen behind closed curtains, is often known for his flamboyant collage and esoteric characterization of the former emperor. Ironically, though, considering the host’s theme of freedom and anti-censorship, no photographs and videos were permitted in this section.

Some amazed and others visibly irked, the spectators gazed at the torched-up image reduced to ashes. Kim Byungheon was clearly the latter:

I am completely baffled and saddened by the footage. Baffled by how a native-born Japanese [filmmaker] could possess such profound anti-Japanese sentiment. Saddened because such is classified as art and circulated under the guise of freedom of expression.

Indeed, freedom of expression serves the core of liberal-democratic values and is rightly guaranteed under the Japanese Constitution. But, inseparable from the legal dimension, public discourse on its limitations and problems associated with selective censorship must go hand in hand to prevent our fundamental rights from being weaponized to carry out ideological and political agendas.

The Korean campaigners, out of exasperation, momentarily contemplated torching the Statue of Peace at one of their rallies back home in an “eye for an eye” sort of performance — a technique Kim calls proportional escalation.

Fujio Ito of the Nagoya Patriots Club, a civic group, urged the Korean team not to be manipulated by the distasteful tactics of one adversary. Kim Byungheon, of course, was simply jesting when he made that suggestion. We can only hope that such proportional escalation remains merely a rhetorical idea for the foreseeable future.