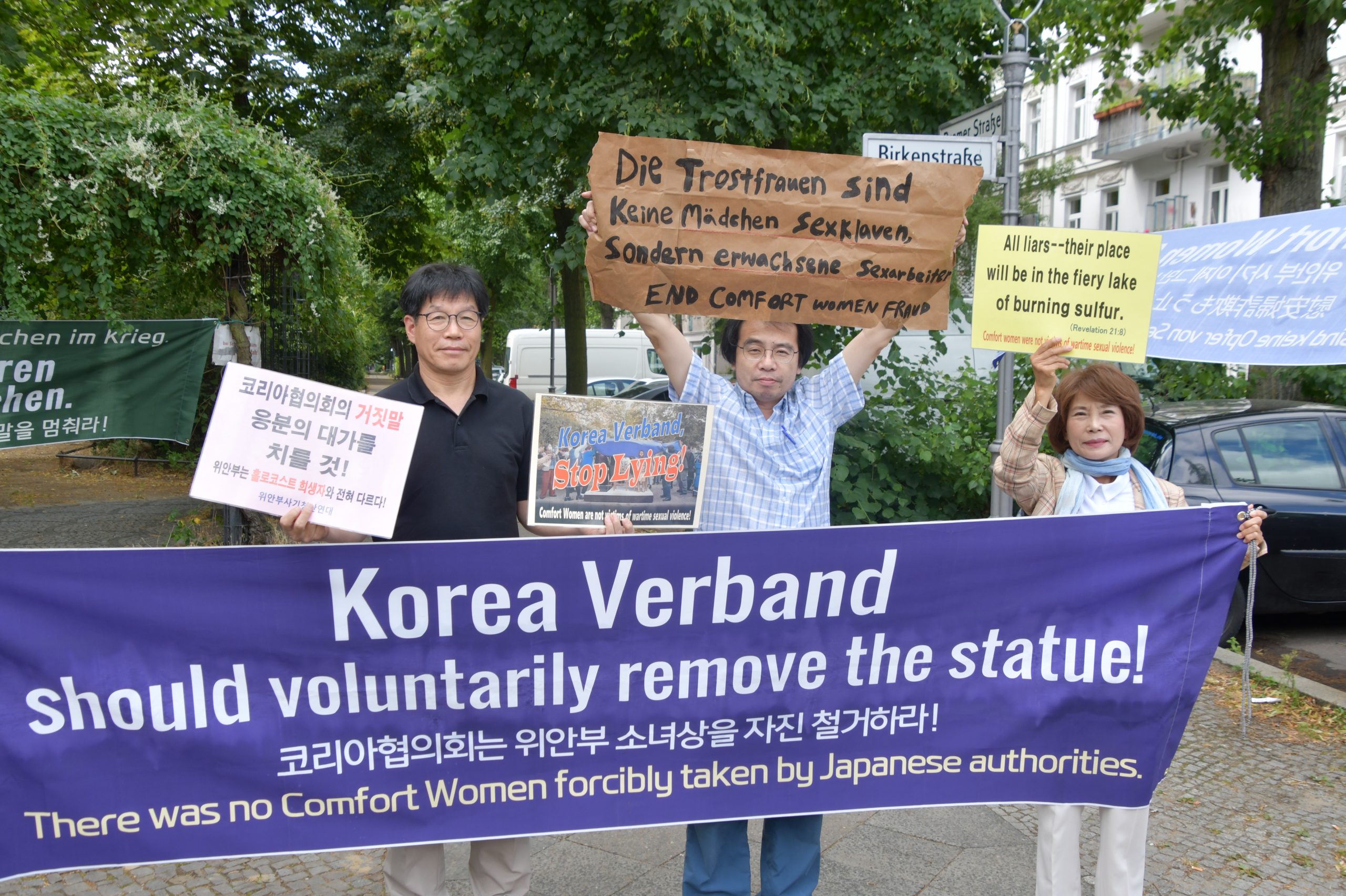 A South Korean civic group holds a lawfully authorized protest calling for an end to the comfort women fraud in Berlin, June 2022.

On June 28, a South Korean civic group spoke to The Sankei Shimbun and JAPAN Forward about its campaign to remove the comfort women statue in Berlin, Germany. Reports of obstructed demonstrations and last-minute cancellation of a scheduled meeting with the city authorities paint an uphill battle.

Journalist Kenji Yoshida accompanied the civic group and reported on the situation in Berlin. Yoshida has been working as a journalist in Seoul and is interested in historical issues between Japan and South Korea, such as the comfort women issue. He arrived in Berlin on June 25 to serve as an interpreter for the civic group leader Joo Oksoon and other members.

The group, calling itself End Comfort Women Fraud, was formed in January 2022, to correct the lies surrounding the comfort women issue.

According to Yoshida, those who went to Berlin were the group’s leader Joo Oksoon, along with Lee Woo-yeon, co-author of the bestseller Anti-Japanese Tribalism and a research committee member of the Naksungdae Institute of Economic Research, and Kim Byungheon, author of Akai Suiyobi 30 Nenkan no Ianfu Waikyoku (lit. “Red Wednesday: 30 Years of Comfort Women Distortion”) and director of the Korean History Textbook Research Institute. Yoshida, as interpreter, was the fourth member of the group.

With permission from the authorities, the group held a demonstration in the morning and evening of June 26 in front of the comfort women statue that had been erected in Berlin’s Mitte district. They demanded the removal of the statue on the grounds that the comfort women issue was shrouded in fabrication and lies and has even led to animosity between nations.

But local activists had covered the comfort women statue in blue mesh. About 60 Korean activists gathered near the demonstration and hurled tirades of condemnation at the group. Some of the activists became violent, escalating the situation into a clash and causing the local police to intervene.

The group’s effort was further compounded when it received a last-minute email from the Mitte City Council canceling a meeting between the civic group and the mayor of Mitte, which had been scheduled for June 27.

To top it off, a water leak at the hotel where the members were staying soaked the computer they had brought and hampered communications.


Opening a Dialogue on the Facts

Despite the ordeal, the group managed to submit opinion letters and statements to authorities in Berlin and the Mitte district, and also held a meeting with local Korean residents.

The group said, “We came here to expose the lies of the local Korean civic group that led the installation of the comfort women statue. We had anticipated various attempts to obstruct our efforts. The South Korean media has covered our activities in varying lights, but we will not give up until the end.”

On the evening of July 5, JAPAN Forward will be hosting an online lecture titled “Will the Comfort Women Statue in Berlin be Removed?” Mr Yoshida will discuss the group’s efforts in Berlin and share their thoughts about future initiatives. Find access and learn more at this link.