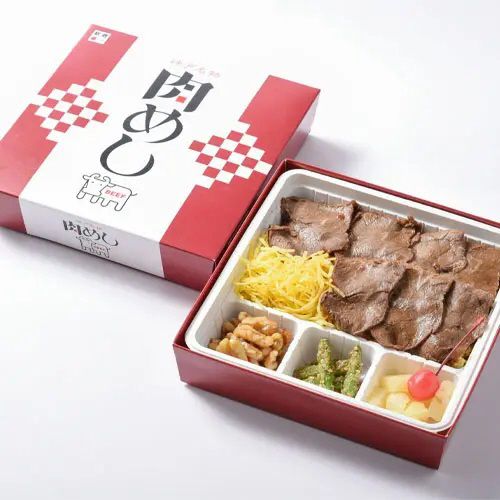 Niku meshi from Awajiya, a company launched in 1965. Boasting national popularity as a Kobe specialty brand. (Courtesy of Awajiya)

People are traveling less during the pandemic, and the effects are being felt widely. The boxed lunches sold at railway stations (and other places) known as ekiben have not been immune..

Awajiya, a 119 year old shop in Kobe known for its niku meshi (meat lunch), had been lamenting a fall in sales by as much as 40% compared to the pre-COVID period. However, determined to turn around this trend, the company set about developing a new product ー a frozen version of their popular Hippari Dako-han.

The popular meal included a special octopus patterned ceramic pot filled with octopus or conger eel on rice, which boasted annual sales of around 500,000 units. Now, the frozen version enables the company to respond to orders from all over the country.

Changing Strategies to Fit the Times

Awajiya is also experimenting with new marketing strategies. They even marketed the lid to the Hippari Dako-han ceramic container, selling more than 10,000 units.

To spice up the menu, the company also developed new flavors, like curry, for its octopus bento.

“There isn’t really a choice,” explained the company’s 40 year old Vice President Yuki Yanagimoto. “We won’t survive if we don’t make every effort to come up with new products to offer.”

There are other factors besides the COVID-19 pandemic that have dampened the ekiben market.

Speedier trains have shortened transfer times, giving less time for passengers to step off the train and buy the bentos. Simultaneously, the number of convenience stores selling similar boxed lunches in the stations has increased.

“There were around 400 ekiben companies in the Showa era (1926 to 1989),” explains Yanagimoto. “And now there are only about 80 companies that are doing it properly. There are places where supermarkets and school lunch businesses have higher sales than ekiben.”

In the old days, when a train arrived at a station, there was always an ekiben seller on the platform.

Each region had its specialties. Eel in Shizuoka, oysters in Hiroshima, and crab along the Sea of ​​Japan in winter.

Awajiya’s niku meshi was born in 1965 in Kobe, and its sliced ​​meat soaked in sauce with a unique texture was a popular bento in the area.

In May 1974, “Kobe Shabu-Shabu Bento Matsukaze” was launched to commemorate the 100th anniversary of the opening of the railway between Osaka and Kobe. For the first time in Japan, the selling price reached the ￥1,000 JPY mark (about $8.75 USD). When this writer read about it in the train timetable brochure, he couldn’t help thinking what a luxury it must have been!

“Kobe beef shabu-shabu on locally produced Mitamai rice sold well,” Mr. Yanagimoto recalled. Currently it sells for ￥1,400 JPY (about $12 USD). In the summer, you have to book in advance to buy the bento.

RELATED: [Hidden Wonders of Japan] You Can Order Your Shinkansen Bento Box in Advance

During the recent 2021 year-end and 2022 New Year holidays, when the infection rates for COVID-19 seemed less serious, 2,844,000, people traveled on the Tokaido Shinkansen connecting Japan’s three largest metropolitan areas, Tokyo/Yokohama, Nagoya and Osaka/Kyoto). This was about 2.6 times that of the same period of the previous year.

“The station was crowded with people for the first time in a while,” observed a JR spokesperson.

However, “Sometime around April or May 2020, when the first emergency declaration was issued, the number of customers fell significantly. And the rate of fall was significant,” the spokesperson said.

There were almost no customers,” according to ekiben sellers at Shin-Osaka Station and Tokyo Station.

At the end of the 2021, too, the station was crowded with people, “for the first time in a while,” said the JR spokesperson.

Traveling habits have changed amidst the protracted COVID-19 pandemic. However, the ekiben have survived. Let’s hope that they will always be our travel companion.

ABOUT EKIBEN LUNCH BOXES:
The Japan Railway Campus Sales Central Association is made up of companies that sell ekiben boxed lunches in Tokyo Station. Members are defined as “those who operate passenger premises at JR6 Passenger Railway Co Ltd.” There were about 430 companies during the peak period of 1968-44, but the number had dwindled to 96 companies in August 2019. Members can use the square ekiben mark with the Japanese Hinomaru flag on their ekiben boxes and their stores.