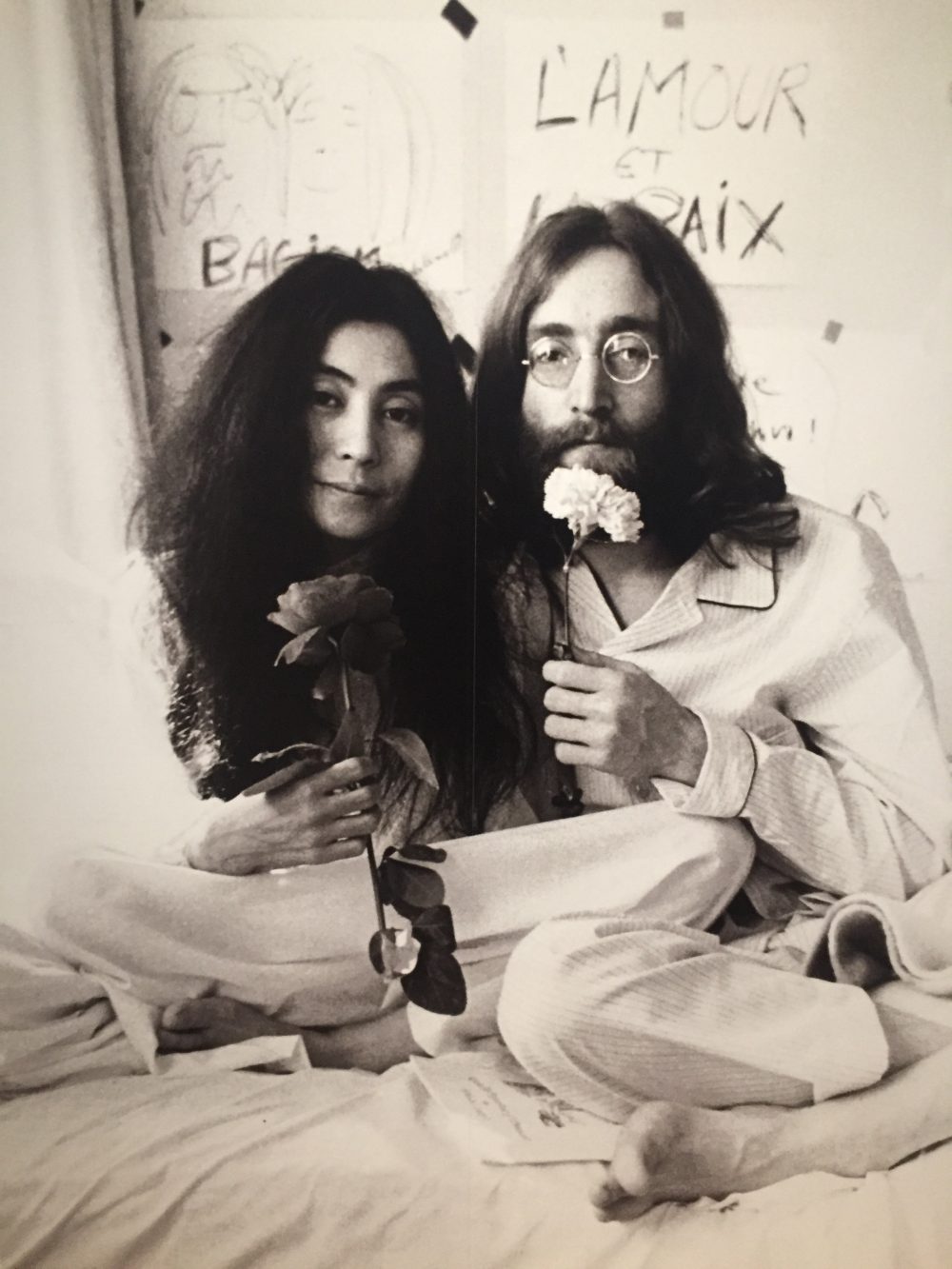 ~As a retrospective on what was clearly a uniquely loving relationship, it focuses on the side of Lennon that promoted a message of peace and love that still resonates today~

So reads an inscription printed on the wall at the Double Fantasy – John and Yoko exhibition currently being held at the Sony Music Roppongi Museum in Tokyo.

The words are those of John Lennon, founding member of 1960s rock group, The Beatles. They refer to his relationship with his wife, Japanese avant-garde artist, Yoko Ono (87).

Below the inscription is a signature drawing by Lennon, a caricature of himself and Ono dated to 1968.

At that time, John Lennon was one of the most famous people in the world. Beatlemania had been a global phenomenon for 5 years, while 1968 would see the release of The Beatles (the White Album), widely considered one of the greatest records ever made.

However, as Lennon’s typically sarcasm-laced words suggest, all of that meant little compared to what was, for him, the most important event in his life – the day he met Yoko Ono. 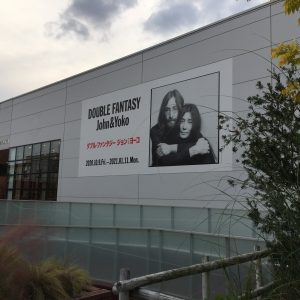 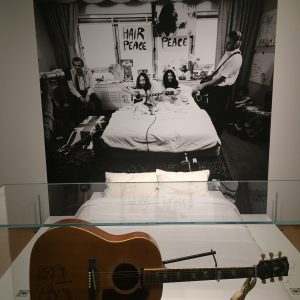 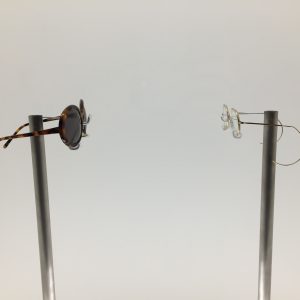 Double Fantasy – John and Yoko is a retrospective of the couple’s well publicized 14-year relationship.

The exhibition coincides with the wider 40th anniversary commemorations of Lennon’s death (December 8, 1980), in a year that also would have marked his 80th birthday (October 9).

It presents a chronological account of major events in the couple’s life together, with a particular focus on the late 1960s and early 1970s.

This was a tumultuous time globally, and the couple became representatives of the international peace movement via their vocal opposition to U.S. involvement in the Vietnam War (1955-1973).

The centerpiece of the exhibition is the display of the guitar used by Lennon during the couple’s infamous ‘Bed-in for Peace’ held at the Queen Elizabeth Hotel in Montreal, Canada (May 26 – June 1, 1969).

A variation on the ‘sit-in’, the couple stayed in bed for a week as a form of nonviolent protest against the continuation of the war. It was during this time – and on the guitar displayed at the exhibition – that the couple recorded the anti-war anthem, Give Peace a Chance. 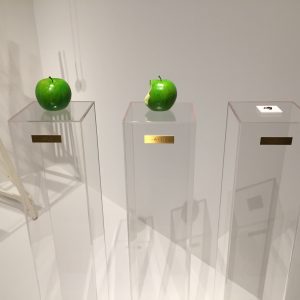 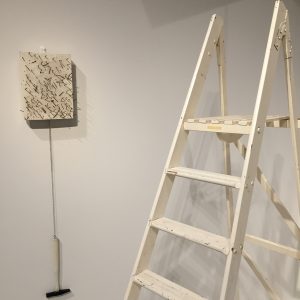 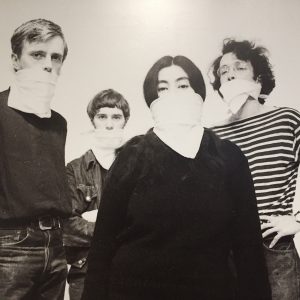 A key feature of the exhibition is the equal focus placed on the artistic career of Yoko Ono in relation to the more storied work of her rock-star husband.

Overseas audiences often fail to realize the esteem with which Yoko Ono is regarded in avant-garde art circles, particularly in Japan.

Alongside notebooks and mementos from Lennon’s formative years, items such as lyric sheets from his time in The Beatles, and – of particular appeal to Japanese audiences – humorous sketches Lennon made as an attempt to learn Japanese, the exhibition also features various examples of Ono’s most well-known installations.

These include “Painting To Be Stepped On,” a blank canvas placed on the floor, which invites visitors to break with their preconceived notions of the sanctity of art by treading on, and dirtying, the piece.

There is also a display, alongside a video interview of the couple explaining its significance, of “Ceiling Painting/ Yes Painting”. The installation features a ladder, and above it a canvas, with a magnifying glass attached.

At the center of the canvass, printed in miniscule letters, is the word “Yes”. Viewers must climb the ladder and view the word through the magnifying glass in order to make out what it says.

In the accompanying video, the couple explain that it was the inherent positivity of this message that first drew Lennon to Ono.

‘All You Need is Love’ 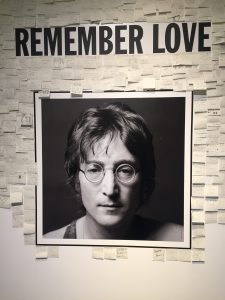 In 1967, a year after the couple first met, Lennon wrote All You Need is Love, a song that would go on to become one of The Beatles most well-known hits.

The song reflects the peace-loving turn that Lennon would take from the late-1960s onwards, a change in personal outlook influenced in large part by his relationship with Yoko Ono.

One criticism of the exhibition is its almost sole focus on this aspect of Lennon’s character.

Aside from some mention of the former Beatle’s infamous “Lost Weekend” – a two-year LA drinking binge and estrangement from Ono during the mid-1970s – there is little reference to the more complicated side of Lennon’s personality and actions.

This is perhaps fitting, however.

Often-heard anti-Yoko arguments from Beatles fans cite the couple’s relationship as the cause of the group’s breakup in 1970.

Double Fantasy – John and Yoko chooses to emphasize the positive influence the couple’s relationship had on their lives, both personally and creatively.

As a retrospective on what was clearly a uniquely loving relationship, it is therefore appropriate to focus on the side of Lennon – a side that he so openly shared with Ono – that promoted a message of peace and love that still resonates today.

Double Fantasy – John and Yoko will remain at the Sony Music Roppongi Museum until Monday January 11, 2021, Monday to Sunday, 10am–6pm.