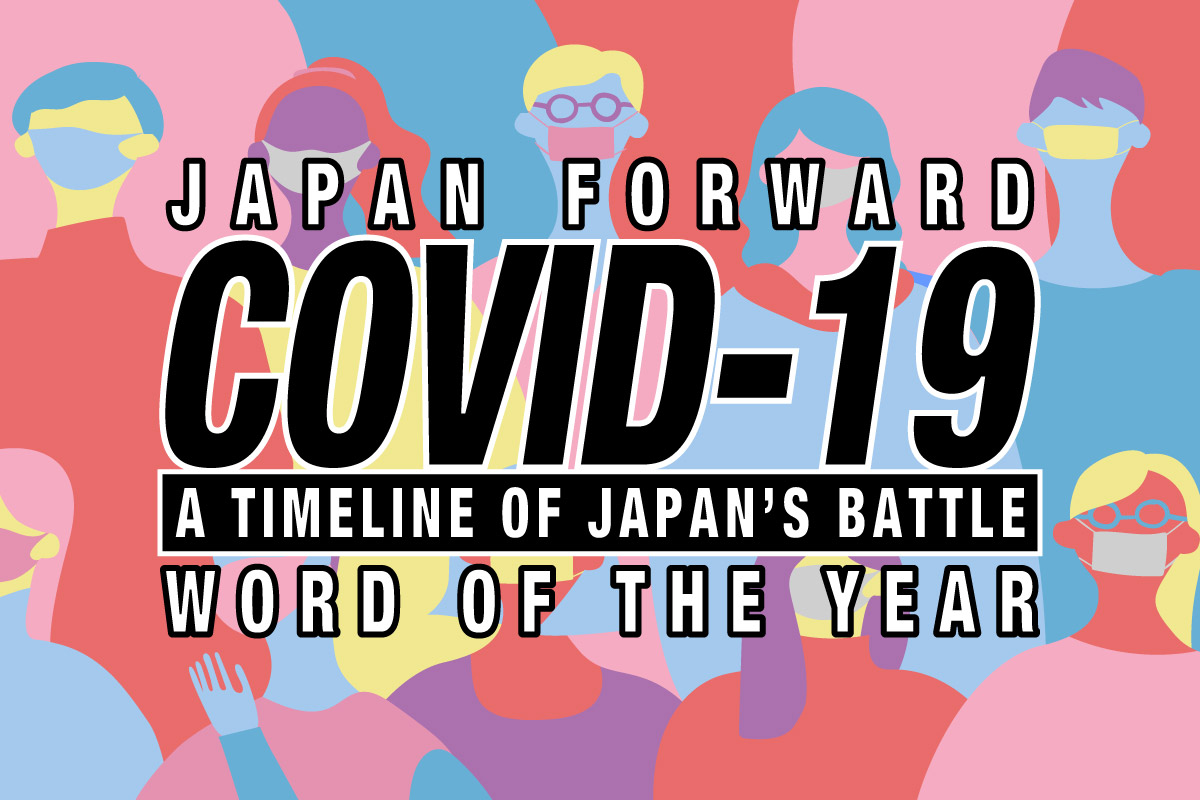 In typical Japanese style, the country has trending words of the year and the kanji of the year. In 2020, both are predictably related to COVID-19.

Over the past few days, we have looked at what words were trending during this calendar year. Hopefully, we made you a little nostalgic for some of the pop trends that so many enjoyed.

Here, we take a look at the single unwelcome factor that affected everyone all over the world and in Japan: COVID-19.

Part 1: A Timeline of Japan’s Battle

January was a month of hope for Japan, we were getting ready Tokyo 2020 Olympics and Paralympics, and more immediately of the impending cherry blossom season.

And then, COVID-19 came knocking early at the door on January 16, with the first case diagnosed in Japan in a patient who had recently visited Wuhan, China, the epicenter of COVID-19. On January 26, Japan joined many other countries as it started evacuating people from the increasing threat spreading from Wuhan.

February was when Japan experienced its first major impact from COVID. The Diamond Princess cruise ship entered Yokohama Bay after visiting other parts of Asia, with a number of ill passengers onboard. The vessel was eventually allowed to dock in Yokohama from February 3, though under strict quarantine. Relive some of the controversy and coverage here:

As more attention gathered regarding the virus, people in Japan started cancelling events, and in everyday life masks were already commonplace.

Commentators were starting to wonder whether the Olympics would be in jeopardy due to the virus. Then on February 27 came the closure of schools in Japan.

March brought the became “the Olympics.” Japan had just started the Olympic flame relay when the WHO defined the spread of COVID-19 as “a pandemic”, and on March 25 the Olympics were officially postponed.

As March drew to a close, pressure was mounting on how to deal with the increasing number of infections that were threatening to stress the medical system and Japanese economy. Though Tokyo is one of the most populous cities in the world at 14 million residents, there came a weekend when businesses were asked to stay closed and Tokyo saw the unprecedented scenes of empty streets.

Then a heavy reality-check fell upon the country: on March 30, the much loved Japanese comedian Ken Shimura died of COVID-19, sending shockwaves across the nation.

April was began to sense the virus was more serious than originally believed. The government, led by Shinzo Abe, called a State of Emergency starting from April 7 in Tokyo, then extended it across the whole country.

It was something which at the time was seen as necessary, although it might impose a heavy burden on the economy. “Stay Home” became the national chant, and “3Cs” the rules for interacting with other humans. As with the rest of the world, people started using online services instead of going shopping in person, and telework became widespread.

As most of the population stayed home, many found ways of coming together through the internet, perhaps most notably with the musician Gen Hoshino.

In the meantime, specialists debated which course to take to overcome the highly communicable disease of COVID-19 and move the country forward. Nobel Laureate Tasuku Honjo argued that focusing on available treatment and testing was a priority. Simultaneously, tests for drugs to treat the disease and minimize its effects continued domestically, focused in particular on the drug Avigan.


May arrived, and with it the Prime Minister announced what many had been dreading: the State of Emergency was extended until the end of the month. Debate on Japan’s ongoing policy was rampant, with some wondering if there should be more PCR testing for the virus among the general population.

With many kids and families staying at home, even during the holiday of Golden Week, the pandemic was starting to take a toll on social relations. A new online industry was born from those trying to cheer up people staying at home, and some festival organizers treated an unexpecting audience to surprise fireworks displays around the country.

Finally, Japan exited the State of Emergency on May 25. In a press conference, the Prime Minister looked ahead to a new normal, and pledged to share the vaccine with the world, leaving no one behind, once one was successfully developed.

June let life take a few tentative steps toward a return to normal. The effects were still being felt on everyday life. Much loved events such as the Fuji Rock Music Festival, and Praemium Imperiale Arts Awards were cancelled for their 2020 editions. Tokyo was also about to see a fresh spike in cases, prompting Tokyo Governor Yuriko Koike to declare a “Tokyo Alert” on June 4.

On the other, the government took steps to try to revive the badly battered economy, particularly for small and medium businesses. And there was a mood of cautious optimism, as the Self Defense Force Blue Impulse planes flew over Tokyo to thank medical workers for their tireless efforts on June 3.

By the end of the month of June, Japan had also taken steps to resume Business travel with Vietnam, opening up the borders for the first time since the spring.

July’s buzzword was “GoTo” Campaign. An ambitious tourism incentive policy designed to kickstart the heavily battered economic sector connected to travel and tourism. Kicking off officially on July 22, it gathered widespread criticism before it started.

Many netizens and local governors thought that it was not wise to be traveling while COVID infections were continuing to rise ー especially in Tokyo. Eventually, Tokyo was excluded from the campaign.

It was a period when there was further discussion by experts of how society could live together with the virus, as we spoke to Nobel Prize Laureate Dr. Shinya Yamanaka, and lead vaccine researcher Dr. Ryuichi Morishita to learn where the scientists thought these critical factors would lead.

August rolled up, and finding a balance became the key issue in fighting the virus.  On the one hand, people were careful. We spoke to many who refrained from going back to their hometowns for the Obon Holidays in mid August. Sometimes people were even too careful, as we interviewed several subjects who experienced a stigma when they were tested because those around them thought they might have COVID-19.

On the other, there was the strong desire to keep traditions in place even during the all-consuming pandemic. Fuji Rock, which was supposed to take place on August 21-23, streamed past concerts online during that time to “Keep Fuji Rockin’.

Thousands of others braved the sweltering heat to visit Yasukuni Shrine to pray for peace on the anniversary of the end of World War II on August 15. The community elders who guide the traditional Gion Matsuri in Kyoto found ways to keep the core of its traditions alive, but in a very low-key format compared to the tens of thousands of Japanese and international visitors who crowd the streets for it each year.

Through the ups and downs, the government and medical workers were on the job 24-7, trying to find a way out of the tunnel of COVID-19. The next shock to the country came on August 28, when Prime Minister Shinzo Abe, who had been at the fore of COVID-19 fight in Japan, resigned for his own health reasons.

September’s start saw the leading party members maneuvering to choose the next leader of Japan, and decided on Yoshihide Suga, who had stood by PM Abe as Chief Cabinet Minister for nearly 8 years. Many looked on with interest as Japan changed leadership:

In the meantime, large events in Japan’s calendar, like the Tokyo Game Show, and the Short Shorts Film Festival, took placeーonline.

From the beginning of the pandemic, the government and experts had sought to find a way to balance keeping the economy afloat while controlling the virus. Some also warned of the strong negative impact of the isolation of quarantines and working or studying from home on mental health. At the end of September, the truth of those concerns became known from the monthly published data in Japan. The sad reality: Japan had seen an increase in suicides, brought home by the death of several young celebrities along with many others since the start of the pandemic.

October brought a mix of emotions, when the renowned and loved fashion designer Kenzo Takada passed away in Paris on October 4, at the age of 81, due to COVID-19. The Japanese designer had extended Japan’s fashion influence to the rest of the world.

Japan tried to keep its chin up, however. Cautiously promising data showed that ordinary flu infections were much lower compared to the average year, bringing hope that the anti-COVID measures were also protecting the population from traditional strains of influenza..

Moreover, October brought a big boost to Tokyo as, after months of reduced working hours, the restrictions on restaurants and bars were lifted.

Tokyo was also added to the tourism boost “GoTo” Campaign on October 5.

Several initiatives tried to keep various enterprises afloat, be it Shiki Theater which managed to keep going with donations and workshops, the CEATEC Technology event which took place online, and MATCHA setting up a tourism support crowdfunding page.

And, of course, October came to a close in the most COVID-19 way: with online Halloween!

November saw some shades of renewed optimism. On November 1, Japan relaxed travel restrictions with 16 countries and regions to encourage travel. It came as a welcome relief for airlines such as ANA and JAL, which had been devastated by the lack of international travel.

Sports-wise, the month brought an important moment when Tokyo successfully carried out an international gymnastics competition on November 8 with coronavirus countermeasures in place, boosting optimism for hosting the Tokyo 2020 Olympics and Paralympics.

Just as the one year anniversary since the first admitted COVID-19 case was diagnosed in Wuhan in December 2019, we began to reflect on the impact on every aspect of life in Japan, from personal day-to-day living and working to the structure of our economy and regional security.

Yet, as the cold arrived, so did COVID-19 infections started to rise once more, led by regions such as Osaka, Hyogo, Hokkaido, and Tokyo. The trend, sadly, followed us into December.

December entered with soaring COVID-19 cases around the globe and in Japan, leaving little time for reflection on the year beyond the single dominating factor of the virus. At JAPAN Forward, however, we interviewed a leading expert in Japan’s COVID-19 response, Professor Hiroshi Oshitani, who explained the priority of “cluster busting.”

As commentators looked at Japan’s performance, hits and misses were identified, and a few were even willing to look beyond the constraints it has imposed on us for now.

But as many might have started thinking about traveling back home, the number of infections and serious cases showed no signs of stopping, and experts again sounded the alarm.

This prompted the government to suspend the “GoTo” campaign nationwide during the end of year holidays, in an effort to disrupt the spread of the virus to other parts of the country.


Where This Leaves Us Now

Not everything was doom and gloom this year, however, as one can realize by looking at the timeline. Together with sad news there was creativity, resilience, innovation.

In tomorrow’s installment we focus on the road to recovery.