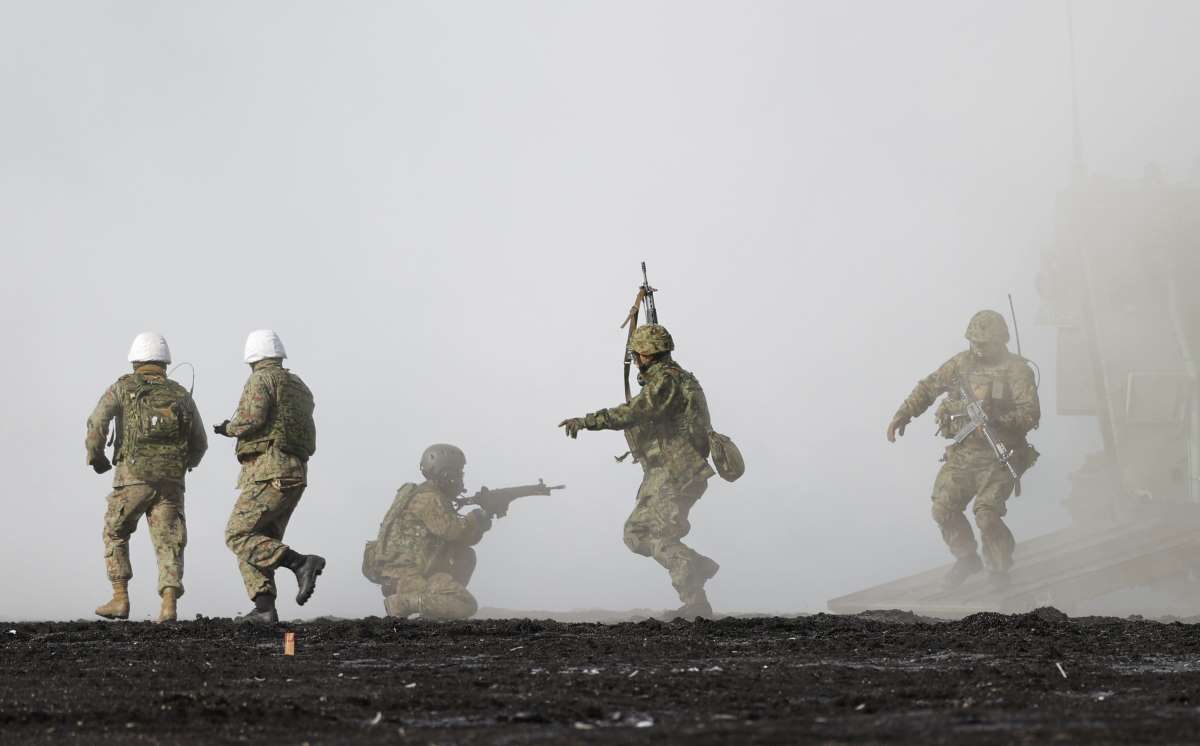 Members of the Ground Self-Defense Forces during a remote island defense drill at the Higashi-Fuji Maneuver Area in Shizuoka Prefecture on March 23. (© Sankei)

The Ministry of Defense is calling for defense expenditures of about ¥5,594.7 billion JPY (about $40 billion USD) in the fiscal year 2023. In addition, there are a large number of requested items for which the amounts have not been specified.

In June, the Kishida administration pointed out in its Basic Economic and Fiscal Policy Guidelines for 2023 that North Atlantic Treaty Organization states had been accelerating efforts to reach 2% or more of their gross domestic product (GDP) on defense spending.

Key policy guidelines in the document declare that the government will “substantially bolster Japan’s defense capabilities as an ultimate guarantee of national security within the next five years."

We urge the Kishida administration to move boldly to strengthen the proposed defense budget in order to build up Japan’s deterrence.

When the country’s three key security documents, including the National Security Strategy, are revised in December 2022, Japan’s aggregate defense budget for the next five years will also be finalized. The Ministry of Defense, for its part, has assessed the military strength of neighboring countries and carefully considered the necessary capabilities for Japan’s defense.

The Kishida Cabinet should approve as many of the ministry’s budget requests as possible, in a scale appropriate to ensuring the FY2023 defense appropriation is worthy of the initial year of significantly strengthening Japan’s defense capability. In-depth deliberations on revenue sources are of course necessary.

It is of epochal significance that the budget request emphasizes the deployment of “standoff missiles” capable of striking enemy forces from outside the threat range of their weapons. Upgrades to the Ground Self-Defense Force’s Type 12 surface-to-ship missiles (SSM) are also expected to make them capable of surface-to-surface attacks.

The missile project is designed to extend the range to 1,000 kilometers or more compared to current SSM ranges of a little more than 100 kilometers. In addition, the schedule will be moved forward by three years with the aim of deploying standoff missile units in FY 2026.

The standoff missiles will be helpful in defending the long north-south Japanese archipelago. At the same time, coastal regions of both China and North Korea will come within their range. If Japan decides to possess counterstrike capability, it will most likely have the effect of deterring aggression from countries such as China and North Korea.

China and North Korea, as well as Russia, are prioritizing the development of hypersonic and irregular trajectory missiles in order to circumvent the missile defenses of Japan and the United States. Now there can be no doubt that acquisition of deterrence in the form of counterstrike capability is imperative for the defense of the people.


Ensuring the Basics are There

Other fundamental pillars for significant strengthening of defense capabilities are also included in the budget request. Among them are essentials, such as ensuring munitions and a stable fuel supply, eliminating shortages of equipment parts, and reinforcing the resistance of defense facilities like command headquarters by moving them underground, among others. These have been low priorities in the past mainly because of budget shortfalls, but they are essential for the actual capability of Self-Defense Force units to perform their jobs.

It is disappointing that the ministry was not allowed to present its budget request in a way that clearly defines its true defense needs and capabilities. Instead vague terms and unspecified amounts were often used.

At least part of the responsibility for that lies with Prime Minister Fumio Kishida, whose announcement of his policy in favor of possessing counterstrike capabilities was late. Likewise, the explanation of his decision to substantially expand defense expenditures was initially fraught with ambiguities.

The Prime Minister should explain to the public his vision of what is required for the defense of Japan and the level of spending required to accomplish it, and do his utmost to convince the public of their necessity.