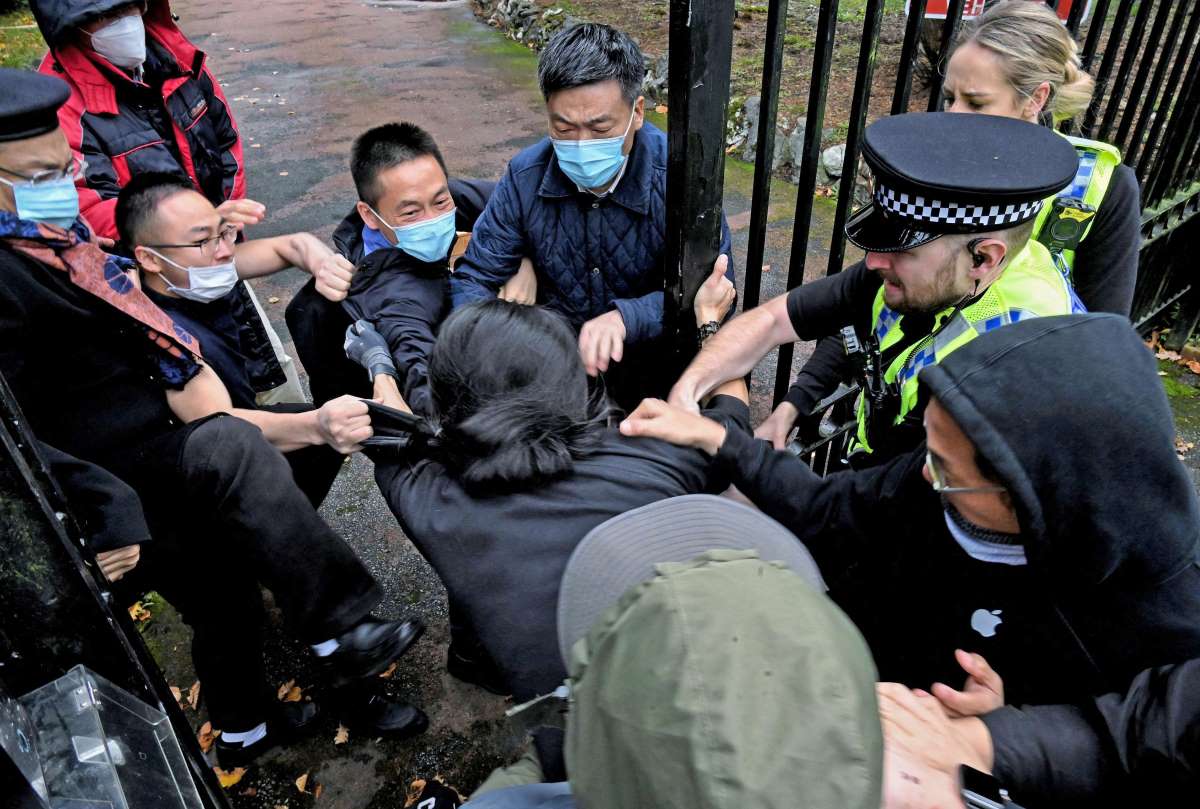 Protester Bob Chan, who was seen being pulled into the Chinese consulate grounds and beaten in the Manchester Consulate attack shows a photograph of some of the injuries he sustained on his back, on his mobile phone, at a news conference, in London, Britain, October 19, 2022. REUTERS/Toby Melville

Embassies, consulates, and other diplomatic establishments in foreign countries are intended to foster ties of trust with the host nations. Violence involving diplomats undermines that trust.

On Sunday, October 16, a truly shocking incident occurred in front of the Chinese consulate in Manchester, a city in central England. Several men, apparently consulate staff, dragged a man participating in a peaceful street demonstration calling for democracy in Hong Kong into the grounds of the consulate. Then they beat him up.

Such a violent attack designed to suppress the expression of free speech cannot be allowed. The attack was a blatant example of the arrogant disregard for rule of law and human rights displayed by the Chinese authorities abroad as well as in China when reacting to speech and actions they find objectionable.

The incident in Manchester was an appalling reflection of the authoritarian nature of the Chinese regime.

China should quickly admit it was in the wrong, apologize, and punish the individuals involved. Naturally, it should also cooperate fully with the investigation being conducted by the British police.

Hopefully, the British government will also unwaveringly hold China responsible for its actions.

Japan and other countries must also become increasingly vigilant about such actions being repeated by the Chinese.

According to reports in the British media, 30 to 40 demonstrators calling for freedom in Hong Kong were gathered in front of China's consulate in Manchester. It was the day that the 20th Chinese Communist Party National Congress was due to open in Beijing.

The man, who was in his 30s, was rescued by local police. However, he had to be hospitalized overnight for multiple injuries sustained in the attack.

Lies and Violence in the Manchester Consulate Attack

A Chinese foreign ministry spokesperson blamed the Manchester Consulate attack on "malicious harassment by lawless elements who illegally entered the consulate." Such a description defies belief. Video footage released by British media outlets clearly shows the man being dragged into the consulate grounds.

The British foreign office has sent a demand to China’s temporary acting ambassador in London that Chinese diplomats abide by British laws and regulations. It is only proper that the British government should express its extreme concern about this violent incident.

The grounds of diplomatic establishments are considered the inviolable property of the nation to which they belong. Consequently, the authority of local police does not extend inside them. And normally foreign diplomats enjoy diplomatic immunity, which means they cannot be arrested.

The foreign office has indicated that it expects China to waive diplomatic immunity in this case. China should act accordingly.

Hong Kong's Search for Its Heart

Xi Jinping's regime has labeled the Hong Kong democracy movement a "splittist activity." Moreover, a hardline has been adopted by the Party Congress on cracking down on antagonistic elements it considers engaged in separatist activities.

The actions of the Chinese consulate in Manchester seems to be an expression of this policy.

Ironically, in Hong Kong on October 19, Chief Executive John Lee announced a different approach. In order to attract foreign talent, he said conditions were being relaxed for the acquisition of long-term visas.

But Hong Kong is no longer free. Instead, it is effectively being ruled by China. Does Lee really think people will be eager to move to Hong Kong?

International society should keep a wary eye on the actions of the Xi Jinping regime.

Author: Editorial Board, The Sankei Shimbun,