No One Remains to Keep Xi Jinping In Check 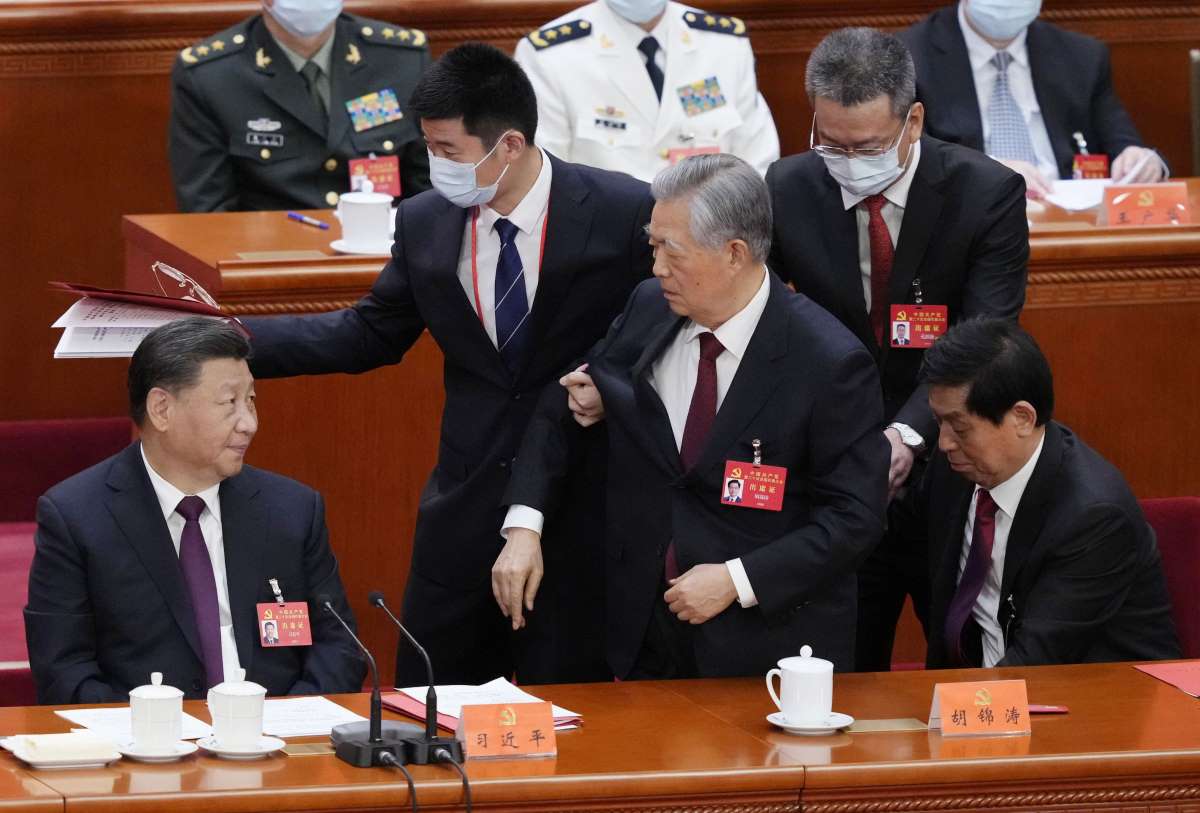 State media attempted to censor the most dramatic moment of China's key political meeting, which took place in Beijing this weekend.

The nation's former leader, Hu Jintao was ushered out of the Great Hall of the People, after what appeared to be some sort of confrontation with his successor, Xi Jinping.

Images of the expulsion were broadcast live on the state TV feed but were not repeated in subsequent bulletins.

Fortunately, the BBC and CNN captured the moment, allowing viewers outside China to see what happened.

Hu Jintao was escorted from his seat by two men. One of them held his arm as other party members looked on.

On his way out, Hu paused and appeared to say something to Xi Jinping and then patted Premier Li Keqiang on the shoulder. Frustratingly, we don't know what words were exchanged, because the sound was mute.

When I saw the pictures on TV, I asked Professor Steve Tsang, Director of the SOAS China Institute at the University of London for his reaction.

"It was a public humiliation for Hu Jintao," he told me. "To make him leave the meeting was a signal that he cannot challenge Xi Jinping. The message was clear: there is only one leader in China and there is no room for former leaders," said Professor Tsang.

This power struggle between Hu Jintao and Xi Jinping was almost certainly related to the selection of people to join the Standing Committee of the Politburo of China's Communist Party.

President Hu Jintao's protege Hu Chunhua, who had been seen as a possible contender for premier, not only failed to make the Standing Committee but was even totally excluded from the Politburo.

All the new members of the Standing Committee - Li Qiang, Zhao Leji, Wang Huning, Cai Qi, Ding Xuexiang, and Li Xi - are acolytes and supporters of Xi Jinping. None of them have any association with Hu Jintao.

And it never faces a public vote.

Until recently, there was a convention that factions could nominate people to join the Standing Committee. This would allow its members to offer a range of perspectives - albeit based on the same political fundamentals.

This era of "inclusivity" is over. Xi Jinping appears to have abolished it, along with the convention that China's leader only serves a limited term. Xi is set to rule China for the rest of his life.

In times of crisis, a leadership team should pull together. Factionalism should be set aside, so that decisions can be reached which are in the national interest.

The most serious problem in China at the moment is the huge social cost of trying to suppress the pandemic by following Xi Jinping's so-called zero-COVID policy.

There is also a slump in the property market which could lead to many local governments defaulting on their debts, snarling up the banking sector.

Xi Jinping is in denial.

On Sunday, he told the media: "The Chinese economy has great resilience and potential. Its strong fundamentals will not change and it will remain over the positive trajectory over the long run."

The Communist Party claims China's GDP will grow at an annual rate of around five percent for the next decade or so. However, the experts I have consulted say that's a wild exaggeration. They say that even the World Bank's modest prediction of 2.8 percent growth for China this year is too optimistic.

Unfortunately, the slump is bound to have a major impact on Japan.

In one of his speeches over the weekend, Xi Jinping referred to a "grim and complex international situation."

The fear is that America and its allies are planning to "decouple" from China, wreaking havoc on international trade. The Chinese Communist Party believes the United States is intent on holding it back due to hubris and jealousy.

This misses a crucially important point. The United States is concerned about security. It worries that semiconductors will enable China to build weapons, ranging from hypersonic missiles to nuclear warheads. To put it bluntly, the US does not want to sell China bomb-making tools which it could use to destroy California.

The US is also concerned that many of its own key industries depend on components which are imported from China - including items which are vital to the US defense sector. These concerns have prompted politicians in Washington to vote to use federal funds to subsidize US technology. Other laws make it hard to sell any high tech gear to the Chinese.

The concept of decoupling is justified on the basis of national security and it only covers some types of business.

Secretary of State Antony Blinken made the point on October 17 that although a "very different" China had emerged under Xi Jinping's leadership, the United States should not "lose sight of the cooperative aspect" in the nations' bilateral ties. (See the speech here.)

My view is that most politicians in Washington don't want to decouple from China in terms of hamburgers, theme parks or sportswear. Mr Blinken stressed that "it's important not to reduce this to a bumper sticker." For this reason, I think that some of the Japanese press overreacted to speculation that the great power rivalry between the United States and China will lead to Japan cutting all ties with China.

However, I recognize that there are quite legitimate concerns in Tokyo about what would happen if Donald Trump returns to the White House in 2024, or if China invades Taiwan.

Yet my principal concern relates to Xi Jinping. Who is brave enough to tell him of his shortcomings, or nudge him away from causing further damage to the economy, or undermining China's international standing?

I don't expect that anyone on the Politburo Standing Committee will dare to challenge him. The "yes-men" have been picked for their loyalty. Meanwhile, the Chinese state media heap praise on Xi Jinping and report his every word uncritically.

Even Hu Jintao - a Chinese leader who could see some value in debate and discussion - has been escorted out of the arena. Xi Jinping's first priority is to consolidate absolute power in himself. People who warn this will lead to despotism risk being purged from the Party's memory.