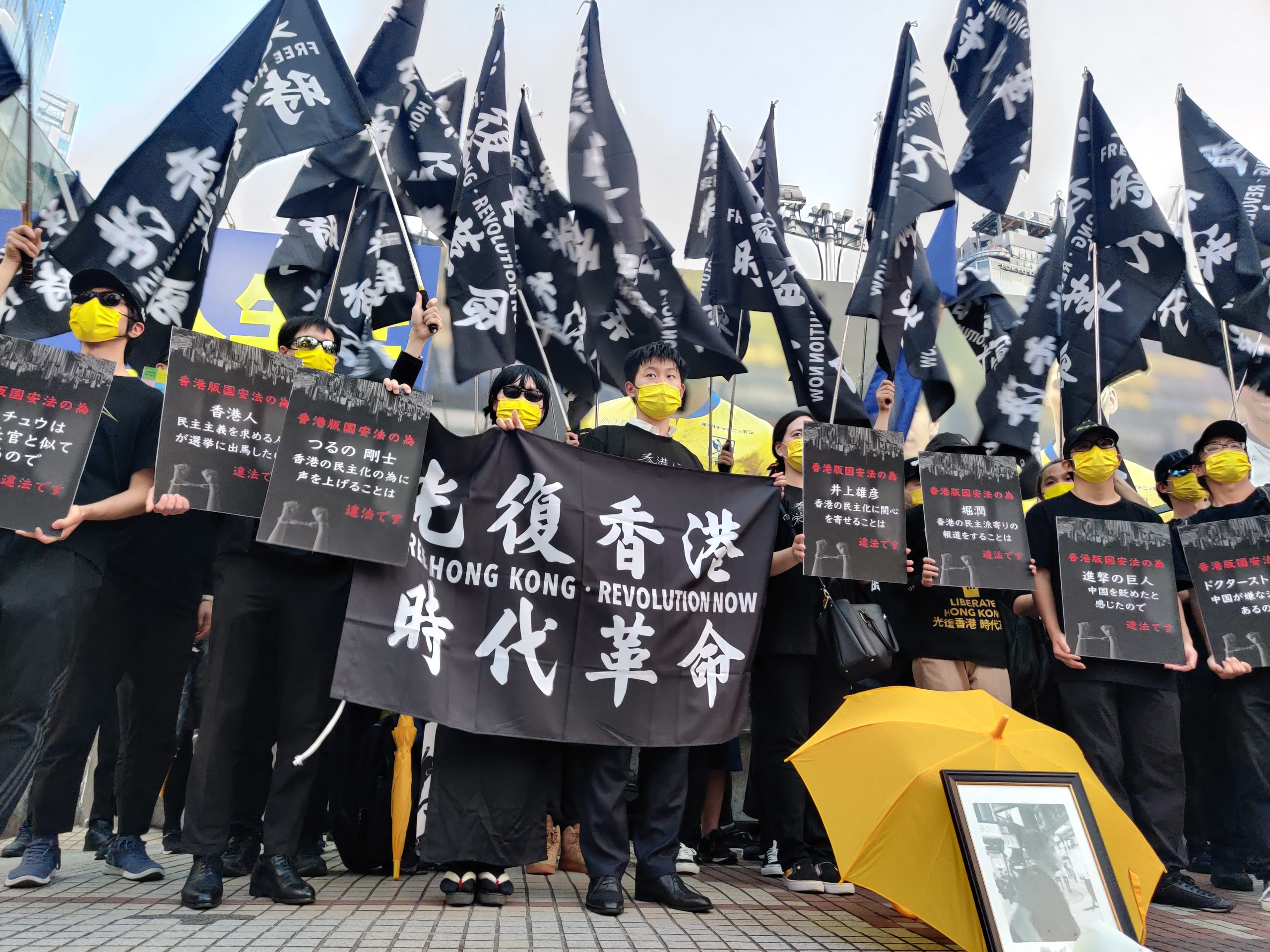 Protesters gather at Shibuya Scramble Intersection in Tokyo on July 2, with banners and flags. (Picture by the author)

On July 2, 50 people gathered at the Shibuya Scramble intersection in Tokyo to bring attention to the plight of Hong Kong. They were members of several Hong Kong-related activist groups in Japan.

Their protest took place a day after the 25th anniversary of the handover of Hong Kong from the United Kingdom to China on July 1, 1997. On this anniversary, Chinese President Xi Jinping was in Hong Kong.

The 1997 handover of Hong Kong was accompanied by China’s promise that it would be administered under the principle of “one country, two systems,” guaranteeing a set of basic freedoms for its citizens. Yet, on July 1, 2020, China imposed a new National Security Law, which applied the Chinese definition of crimes of secession, subversion, and terrorism, to the special administrative region, voiding the idea of “one country, two systems.”

Since then, activists have been imprisoned, media organizations shut down, and people have fled what used to be a beacon of freedom and prosperity in the region.

Nearly 3,000 km away in Tokyo, young people were showing they had not forgotten the promises of 1997.

The protestors were holding placards giving examples of what is acceptable in Japan but is now considered illegal behavior in Hong Kong. Some of them read: “Raising your voice for the democratization of Hong Kong,” “Reporting on democratic-leaning parties,” and “Reading a book about Tiananmen.”

“What in Japan is normal behavior would be enough to get you arrested in Hong Kong,” said the leader of Stand with Hong Kong, William Lee, as he shouted to a crowd of approximately 100 passersby.

Lee cited the absurdity of banning Winnie the Pooh videos in China, and now in Hong Kong under the new National Security Law, simply because Pooh resembles President Xi.

Later in an interview, Lee shared a message for Japanese policymakers with JAPAN Forward.

“What happened in Hong Kong is not an isolated problem. There is a possibility that it could also negatively affect people in Japan,” he said.

At the demonstration, activists were distributing leaflets. One eighteen-year-old passer-by from Saitama, who took one of the leaflets, told The Sankei Shimbun: “I have never before thought so deeply about the idea of freedom, and I hope this can be an opportunity for many to think about Hong Kong ー and what freedom means.”

Among the participants in the demonstration were not just people from Hong Kong. One man in his 20s was there from Shenzhen, in mainland China. He told us he preferred to stay anonymous because the Chinese authorities monitor all citizens.

The man explained how he had always been interested in the cause of Hong Kong, even while in China. “But I couldn’t do anything about it. I couldn’t post on social media as it was too risky. All I could do was talk to my parents and try to let them know what was going on, too,” he explained.

The man from Shenzhen was holding a yellow umbrella, a reference to the Umbrella Movement in 2014 when Hong Kongers flooded the streets to demand the right to elect their leader.

“Hong Kong is culturally very similar to China, so as a Chinese, I wanted to do something and show my support,” he said earnestly.

Another man in his 20s from near Beijing echoed the first man’s sentiment. He is part of the Federation for a Democratic China.

“In China, there are so many people who have lost their rights. Not just in Hong Kong, but in the Uyghur [region of Xinjiang] and in Tibet. Many people are imprisoned for politically related crimes.”

Recounting how he joined the protest in Hong Kong for a week in 2019, he said, “There were millions of people in the streets, but also so many police.”

“As Chinese overseas, we need to tell people what the government is doing to Chinese people,” he concluded.