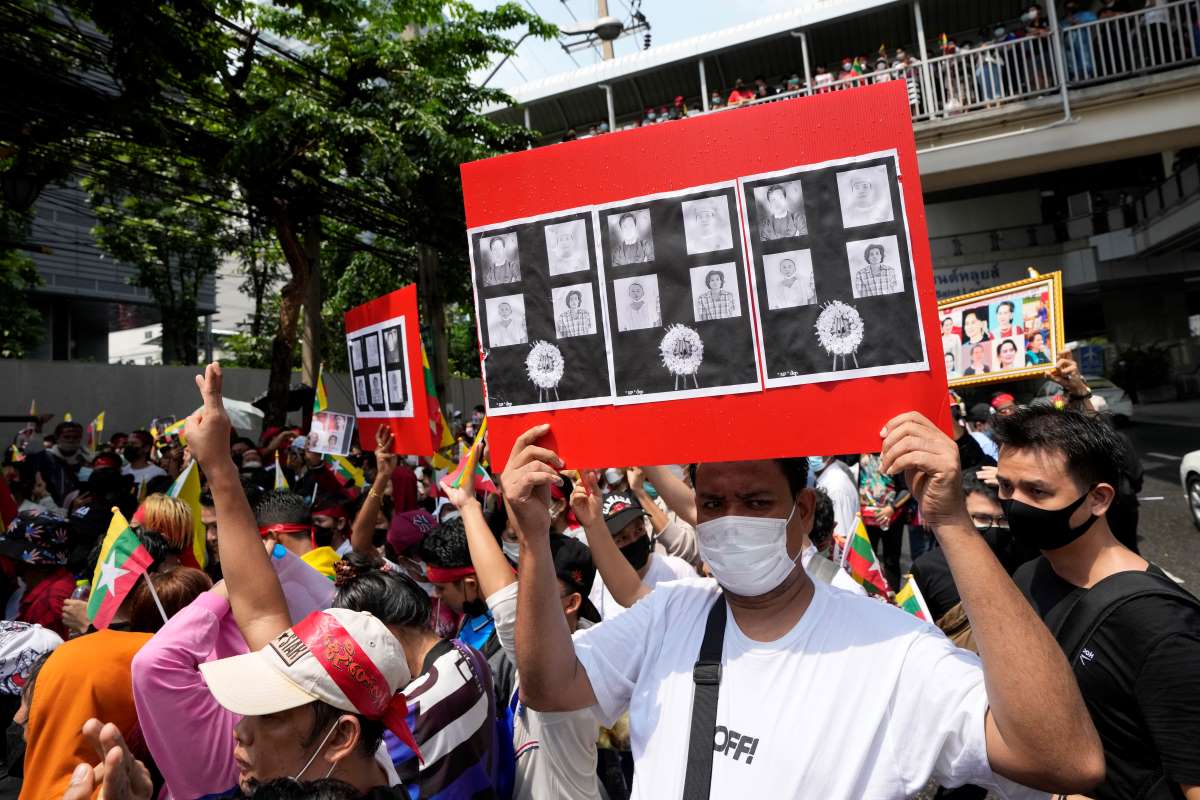 Myanmar nationals living in Thailand hold the pictures of the executed political prisoners in Myanmar, as they protest outside Myanmar's embassy in Bangkok, Thailand, Tuesday, July 26, 2022. (AP Photo/Sakchai Lalit)

Myanmar’s ruling junta has executed four pro-democracy activists, including a member of parliament. They protested the authoritarian regime and made persistent demands to restore democratic rule of law.

A court established by the national military regime sentenced them to death in January 2022 for allegedly aiding “terror acts.” It is highly doubtful that the defendants were given a chance to explain or defend themselves in the secret trials. The reality is that they were executed because they were political dissidents.

Voices were raised inside and outside the country against the death penalty for the defendants. There had been no executions in the country in recent decades, but the Myanmar military forced the capital punishment rulings through without appeal.

According to human rights groups, 117 people, including two children, have been sentenced to death since the military carried out its coup d’etat. The execution of the four prisoners is nothing short of an effort to intimidate Myanmar citizens.

These acts are a clear sign that government repression is becoming more severe. Japan and the international community should work together to intensify pressure to end the junta’s power grab.

A year and a half after the coup d’etat, the situation in Myanmar has only deteriorated. The military has responded to peaceful protests with live ammunition, and some pro-democracy forces have entered into an armed struggle. Economic peril is real due to the COVID-19 pandemic and soaring fuel and food prices following the Russian invasion of Ukraine.

However, the military junta has yet to initiate the dialogue it promised the Association of Southeast Asian Nations (ASEAN), and there is little hope for a peaceful solution.

It is alarming that the beleaguered national army is deepening its inclination toward China and Russia while increasing its strong-arm approach as if to emulate both countries.

In July, Chinese Foreign Minister Wang Yi visited Myanmar for the first time since the junta took control and expressed his support for the military junta. General Min Aung Hlaing, commander in chief of the national armed forces, visited Russia shortly afterward and discussed military and defense cooperation as well as energy procurement. This is the second visit to Russia by the commander in chief since the coup.

Both China and Russia are in a position to exert influence over Myanmar’s military. They should use their position to encourage a peaceful resolution. Defending the heavy-handed stance of the Myanmar military is tantamount to inciting the use of force.

Following the execution of the four activists, the foreign ministers of eight countries — including Japan, the United States, South Korea, and the European Union — issued a joint statement condemning the executions. Cambodia, which holds the ASEAN chair for 2022, expressed “deep disappointment.”

Using this framework, including ASEAN, we should work together to take the initiative on facing the Myanmar military. We must repeat our message to the military and persuade them that there is no future in the unjust seizure of power.

(Read the editorial at this link.)