EDITORIAL | IOC’s Role is to Protect Athletes, Not to Curry Favor with Beijing 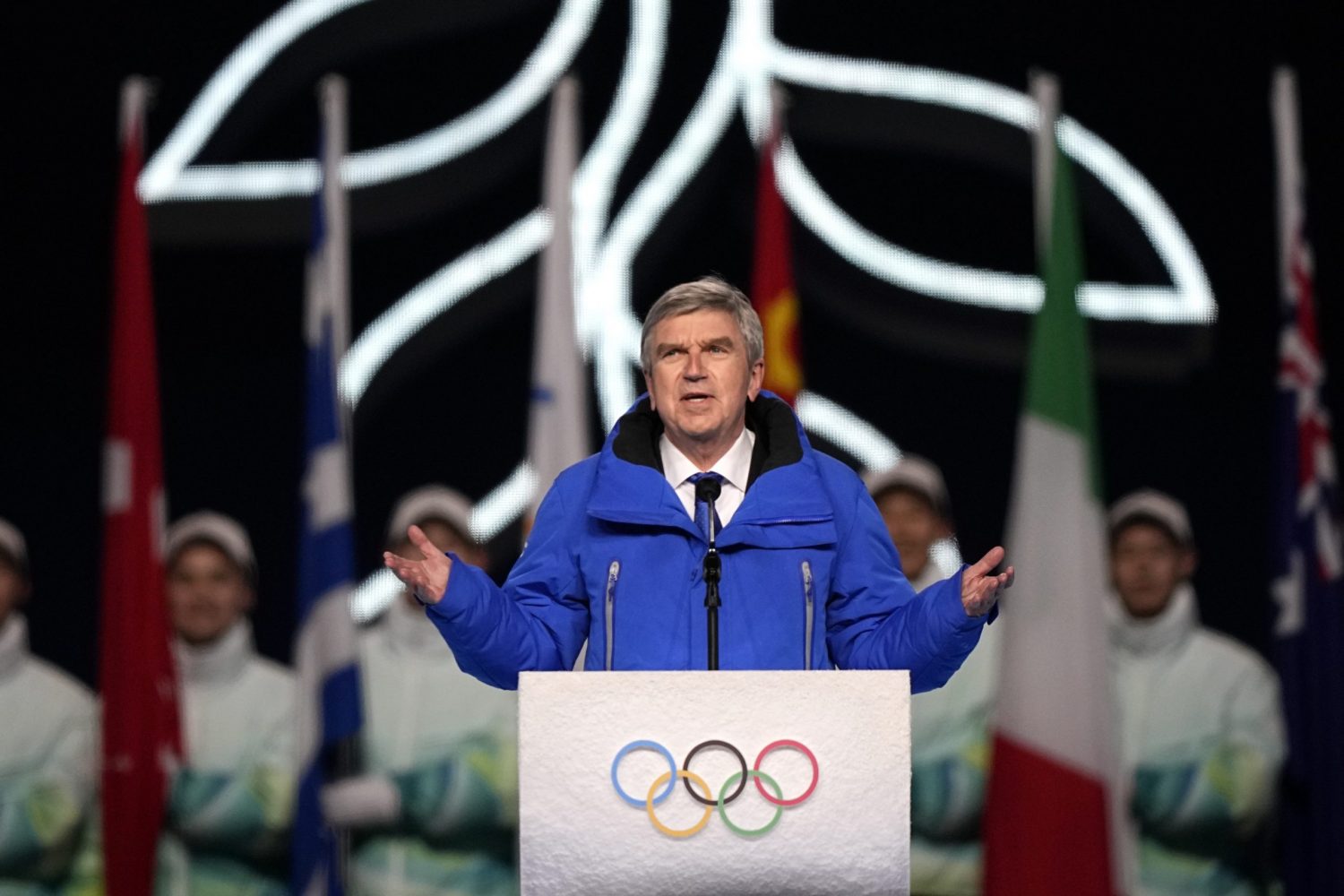 IOC President Thomas Bach speaks at the Opening Ceremony, where he should have reinforced the right of athletes to freely express themselves without fear of the threats of reprisal issued by the host government. (David J. Phillip/AP)

The curtain rose Friday, February 4, on the Beijing Winter Olympics with a gala opening ceremony held at the National Stadium known as the “Bird’s Nest” in Beijing.

World leaders in attendance were for the most part leaders of authoritarian governments who were not invited to the online Democracy Summit held in December of 2021. In Chinese, President Xi Jinping welcomed International Olympic Committee (IOC) president Thomas Bach, Russian President Vladimir Putin, and Kazakhstan President Kossym-Jomart Tokayev.

This VIP lineup was emblematic of the nature of these Olympic Games.


Lack of Support from the International Community

Several nations, including the United States, the United Kingdom, and Australia have announced a diplomatic boycott of these Olympics to protest China’s suppression of human rights in Xinjiang and Hong Kong. Japan, for its part, refrained from sending any high-level government officials to Beijing.

Also, an Indian public broadcaster announced that it would not broadcast the opening ceremony live to protest the fact that one of the bearers in the Olympic torch relay was a People’s Liberation Army officer who was wounded in a 2020 clash on the Galwan Valley along the India-China border.

The Olympic competition had already started earlier that same day, with the Japanese women’s ice hockey team triumphing over the Swedish team, and Shoma Uno and other members of Japan’s figure skating contingent getting off to a good start.

We should heartily applaud the efforts of the athletes from around the world who are competing in this premier global event held only once every four years. But we cannot welcome the event itself. That is because the capital of China, a nation with a multitude of serious human rights issues, is not a suitable venue for what is supposed to be a “festival of peace.”

On January 3, the IOC held its assembly in Beijing. At this meeting, Bach announced that Beijing had become the first city to successfully complete preparations to hold both a summer and winter Olympics. He added that the Beijing Olympics “are enjoying strong support from the international community.”

We could not believe what we were hearing. Where on earth could we find the “strong support from the international community” that Bach was talking about?

Perhaps he was referring to the attendance at the opening ceremony of United Nations Secretary-General Antonio Guterres, who should be keeping an eye on the global human rights conditions, and World Health Organization Director-General Tedros Adhanom Ghebreyesus. The WHO has been leading the fight against COVID-19, which after all originated from the central Chinese city of Wuhan.

This only serves to draw attention to the abnormal pro-China slant of numerous international organizations, including the IOC. It is extremely doubtful that an IOC with such a posture will stand up for and protect athletes and other participants in the Beijing Olympics.

Prior to last year’s Tokyo Summer Olympics, the IOC relaxed some of its rules so as to allow athletes to express their views on religious, racial, or human rights issues under certain conditions.

However, a spokesperson for the Beijing Organizing Committee issued the following stark warning in response, saying: “Any behavior or speech that is against the Olympic spirit, especially against Chinese laws and regulations, are also subject to certain punishment.”

It should be borne in mind that China does not share the Western value of the “rule of law.” Instead, the Chinese leadership has made it abundantly clear that the law is under the leadership of the Chinese Communist Party (CCP).

In other words, in the name of “the law,” the CCP can punish anyone as it sees fit for any speech or action that it does not like. The number of cases in which laws have been arbitrarily used against human rights activists within China are too numerous to count.

US State Department spokesman Ned Price has stated the official US position as follows: “US athletes are entitled to express themselves freely in line with the spirit and charter of the Olympics, which includes advancing human rights.” At the same time, Nancy Pelosi, Speaker of the House of Representatives, warned the athletes: “Do not risk incurring the anger of the Chinese government, because they are ruthless.”

We urge the IOC to dispel such concerns.

Specifically, President Bach should demand that President Xi explicitly pledge that freedom of speech within the parameters set by the IOC will be allowed. But all we hear instead is praise of Xi and China.


Giving the Competitors Our Full Support

Prior to the start of the Beijing Olympics, Xi emphasized to the Chinese people that the success of the Games would strengthen national confidence in attaining the “great Chinese Dream” of national rejuvenation.

He added that, as the host nation, China should strive to “get good results” by winning as many medals as possible. Such jingoism immediately brings to mind the 1936 Berlin Olympics, where Adolph Hitler and the Nazi Party touted the “superiority of the Aryan [master] race.”

In the end, things did turn out as the Nazis planned. The star of the Berlin Olympics turned out to be Jesse Owens, a black athlete from the United States who won four gold medals in sprint and long jump events. The same Olympics saw Japanese swimmer Hideko Maehata, known for her ganbare (“never give up”) spirit, best Germany’s champion in the final of the 200-meter breaststroke event.

Neither Owens nor Maehata set out to oppose the Nazis by running or swimming as they did. They were no doubt expressing their own inner drive and the pure desire to perform their very best for their motherlands.

We should give our full support to the athletes competing at these Olympics as well.

Showing off the prestige of dictators does not reflect the sincere competitive spirit of the athletes that the Olympics are meant to showcase. The Games are premised on fairness so that the athletes can dedicate themselves to focusing on the competition.

The Organizing Committee should be required to create such an environment, and it is the responsibility of the IOC to ensure that it does. Simply trying to curry favor with the host city and the local authorities will cause the IOC to lose its justification for existing.