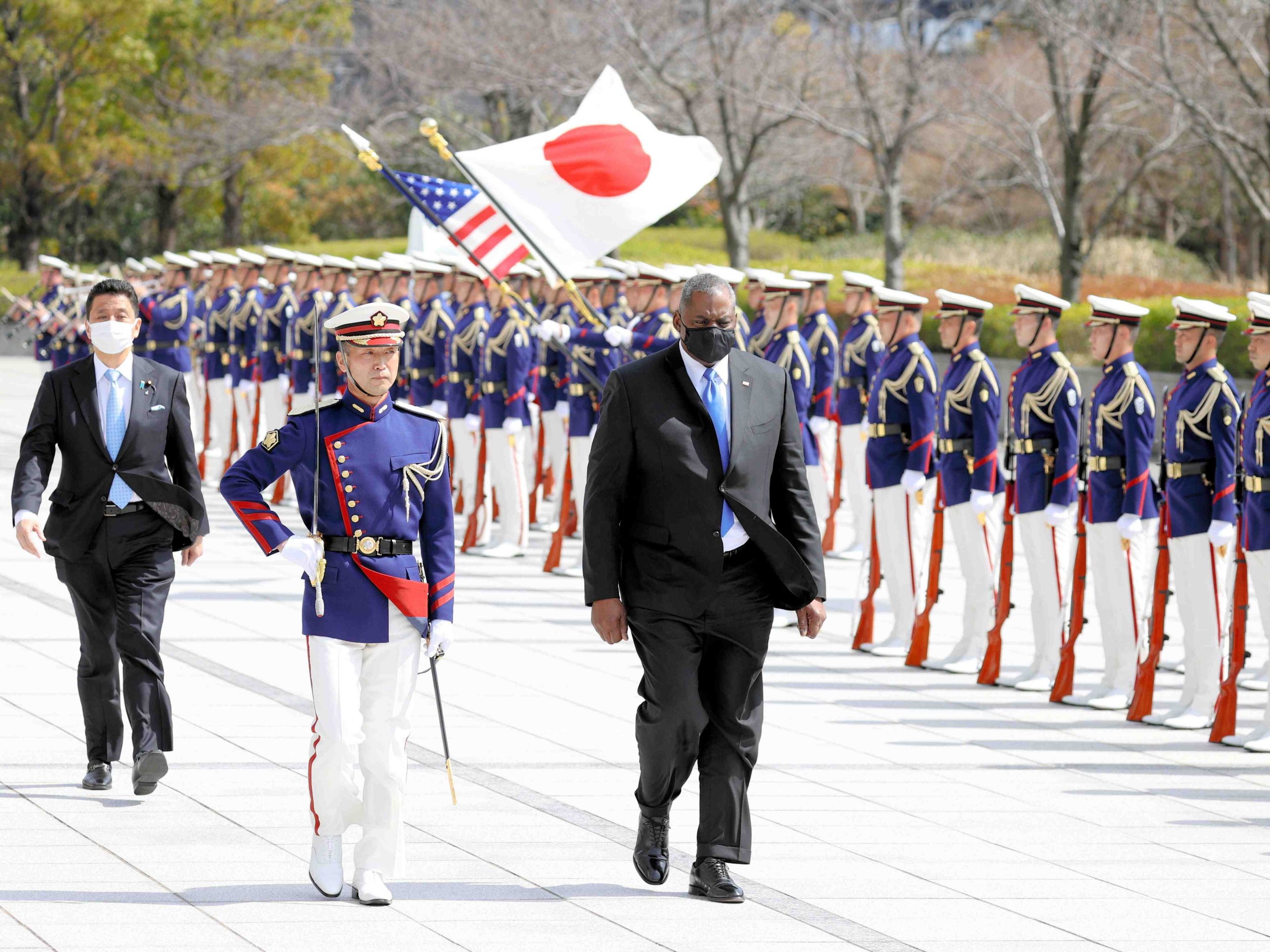 U.S. Defense Secretary Lloyd Austin reviews the Japanese Self Defense Forces during his trip to Japan for 2+2 meetings in March 2021.

The best way to ensure peace is to bolster the deterrence capability of the Japan-United States alliance to counter the growing threat from China.

On March 16 the Japanese and U.S. foreign and defense ministers held a U.S.-Japan Security Consultative Committee meeting (2+2) in Tokyo. In reference to China, the joint statement issued at the end of that meeting stated that the two countries are “committed to opposing coercion and destabilizing behavior toward others in the region, which undermines the rules-based international system.”

The joint statement took strong stands on China-related issues, such as the Senkaku Islands, Taiwan, and the South China Sea, as well as human rights violations in Hong Kong and Xinjiang. It also expressed “serious concerns” about the new China Coast Guard law and other recent developments, and reaffirmed the importance of timely resolution to the North Korean nuclearization and abduction issues.

We were happy to see the acknowledgement by the two sides that “where inconsistent with the existing international order,” China’s behavior presents multidimensional challenges, and to see the determination to deter such behavior.

The joint visit by the U.S. diplomatic and defense chiefs was the first such overseas visit since the launch of the Biden administration in January. Prime Minister Yoshihide Suga is slated to visit the United States in early April to meet President Joe Biden, making him the first foreign leader to meet Biden in person since he entered the White House, demonstrating the importance the Biden administration places on the Japan-U.S. alliance.

Although at the 2+2 meeting the U.S. side reiterated its “unwavering commitment to the defense of Japan” to include the Senkaku Islands, Japan cannot afford to simply breathe a sigh of relief.

Japan also requires a policy that has real backbone to it to deter China. The fact is that the only language that the Chinese Communist Party understands is strength, and mere talk will do nothing to deter its aggressive ambitions.

As Admiral Philip S. Davidson, commander of the U.S. Indo-Pacific Command, testified before Congress, “The greatest danger for the United States and its allies is the erosion of conventional deterrence.”

Foreign Minister Toshimitsu Motegi also told the 2+2 meeting that the “strategic environment in the Indo-Pacific region is now at a totally different level than before.”

The dangers are real and they are severe. That is because Tokyo, where the 2+2 meeting was held, is located in Japan, which is on the frontline of direct confrontation with China.

Japan and the United States must now work to develop concrete policies for strengthening their alliance. Even though it is admittedly faced with severe fiscal conditions, Japan still possesses the third largest economy in the world. It should cooperate with the United States to establish a favorable military balance vis-à-vis China.

In the joint statement, Japan resolved “to enhance its capabilities to bolster national defense and further strengthen the Alliance.”

We must not let that remain just a verbal promise. Hopefully, Prime Minister Suga will now work to strengthen Japan’s defense posture by committing to a substantial increase in defense spending.