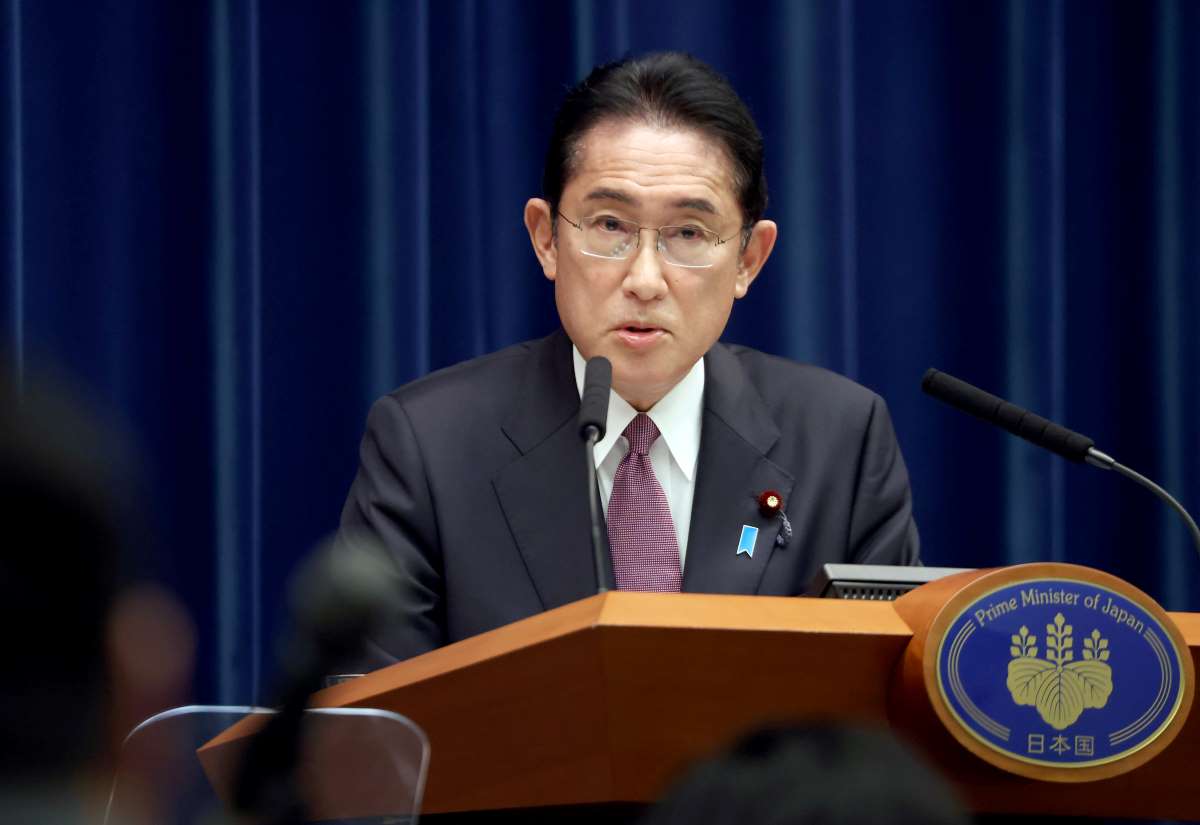 Prime Minister Fumio Kishida holds a press conference announcing the decision on the "Three Security Documents," including the new National Security Strategy, at the prime minister's office on December 16 (© Sankei by Yasuhiro Yajima)

The plans are designed to strengthen Japan's defense capabilities amidst an increasingly challenging security environment. Among other things, they call for Japan to acquire a counterstrike capability and spend around ¥43 trillion JPY ($315 billion USD) over the next five years on defense.

That would mean that by FY2027, the final year of that period, Japan's defense spending and related supplementary budget combined will reach approximately 2% of the nation's current GDP.

The government has clearly signaled its intent to shift to a realistic course for developing defense capabilities that correspond to the military capabilities of potential aggressors.

We welcome this historical commitment to drastically upgrading our deterrence capability to preserve the peace. After all, the government's greatest responsibility is to protect the independence of the nation and the lives of its citizens.

We applaud Prime Minister Kishida's decision and his cooperation with the ruling coalition in deciding on measures to fundamentally strengthen defense capabilities. That was something that even administrations led by the late Shinzo Abe proved unable to do.

Kishida Proves to Be a Can-Do Leader

We hope that Prime Minister Kishida will continue to exercise his leadership in implementing measures to bolster Japan's defenses. We must also speed up coordination between Japan and the United States in order to strengthen joint operations between reinforced Self-Defense Forces and the US military.

Japan is a nation that respects democracy, the rule of law, human rights, and peace. And it possesses the third largest economy in the world. The government's recent decisions are highly significant in terms of contributing to global and regional peace.

Yet, Japan is surrounded by autocratic regimes in China, North Korea, and Russia. The NSS makes specific reference to all three, identifying developments in China as the "greatest strategic challenge" to the international order.  North Korea's military activities are labeled a "grave and imminent threat to Japan's national security." And it says that Russia's military activities near Japan are of "strong security concern."

Originally, a passage in the National Defense Strategy was to state that the landing of Chinese ballistic missiles in Japan's exclusive economic zone (EEZ) in August was seen as a threat to our nation and the local population. However, the "our nation" section was dropped from the original draft. This was due to diplomatic concerns on the part of Komeito, the Liberal Democratic Party's partner in the ruling coalition. That was most unfortunate.

Although Komeito deserves praise for agreeing to the acquisition of a counterattack capability, its stance toward China remains highly problematic. Shouldn't it be showing more concern for Japan and its people than for the sensitivities of the Chinese Communist Party?

Warnings on a Complex Security Environment

The NSS starkly warns that today Japan finds itself in the most threatening and complex security environment it has faced in the postwar era. It displays a sense of crisis in explaining this status.. "Russia's aggression against Ukraine has easily breached the very foundation of the rules that shape the international order," it states. "The possibility cannot be precluded that a similar serious situation may arise in the future in the Indo-Pacific region, especially in East Asia."

Furthermore, this report points out that "concerns are mounting rapidly" within the international community about "peace and stability across the Taiwan Strait." This comes as the Chinese military activity continues to expand and its pace quicken.

A National Security Strategy Fulfilling the Government's Duty to the People

We have entered an era in which it will be impossible to maintain peace and safeguard the lives of the nation's people by continuing to haphazardly pursue defense policies that were shaped during the Cold War era. In that respect, while the NSS continues to adhere to the fundamental principles of postwar security structure, such as the defense-only principle, it represents a decisive and practical change in security policy. Of course, the importance attached to the Japan-US Security Treaty has not changed in the least.

The military situation has seriously deteriorated. This is due to, among other things, improved capabilities for Russian, Chinese, and North Korean missiles. Missile defense is essential. But that alone will not be enough to protect the Japanese people.

For effective deterrence it is essential to possess the capacity to counterstrike bases in the territory of an aggressor country. That requires long-range missiles and other means. This is within the scope of the government's 1956 view on the limits to defense.

Criticism of the move as a "violation of exclusive defense" principles is off base. Those who oppose a counterstrike capability offer no protection for the nation's people. Instead, they are advocating a false alternative that would do nothing to stop an invading army.

China, Russia, and North Korea have all been strengthening their nuclear forces. However, Japan has as yet unveiled any concrete measures to enhance its nuclear deterrence posture. Nevertheless, one is needed in order to protect the Japanese people from nuclear threats. We need to give urgent consideration to this situation.

After the Diet approves the budget, the Ministry of Defense and the Self-Defense Forces will enter the budget implementation stage. In order for existing units and equipment to fully exhibit their capabilities, we should quickly improve their war-fighting capacity. That means securing adequate ammunition, fuel, and repair parts. We also need to move quickly to strengthen the resilience of facilities, for example by relocating command centers underground.

Acquiring a counterattack capability and establishing a "Space Self-Defense Force" are symbolic of the large-scale reforms we need to continue pursuing. It is sometimes difficult to tell what is the right choice in the rapidly evolving military sphere. Still, it is important not to be afraid to learn by trial and error.

Japan has embarked upon a comprehensive strengthening of its defense structure. Among them are elements covered by the supplementary budget, including cyber defense, defense R&D, and infrastructure.

The cooperation and encouragement of other ministries, local governments, businesses, academia, and the public will be important for its success. Members of the Self-Defense Forces put their lives on the line for the nation's defense. The least we can do is minimize the risk of damage in the event of hostilities and support their readiness to perform their duty.

Unfortunately, the timing for a "defense tax hike" has not been finalized. Opposition within the ruling Liberal Democratic Party and other politicians is the problem. However, there is a danger that unfriendly governments and militaries in the region may conclude that Japan lacks the will to defend itself.

Substantial defense spending will still be required in FY2028 and beyond. It is therefore important to provide for stable financial resources. LDP members should keep the big picture in mind. Members must not forget their responsibility to secure defense funding adequate to increase Japan's deterrence capabilities.