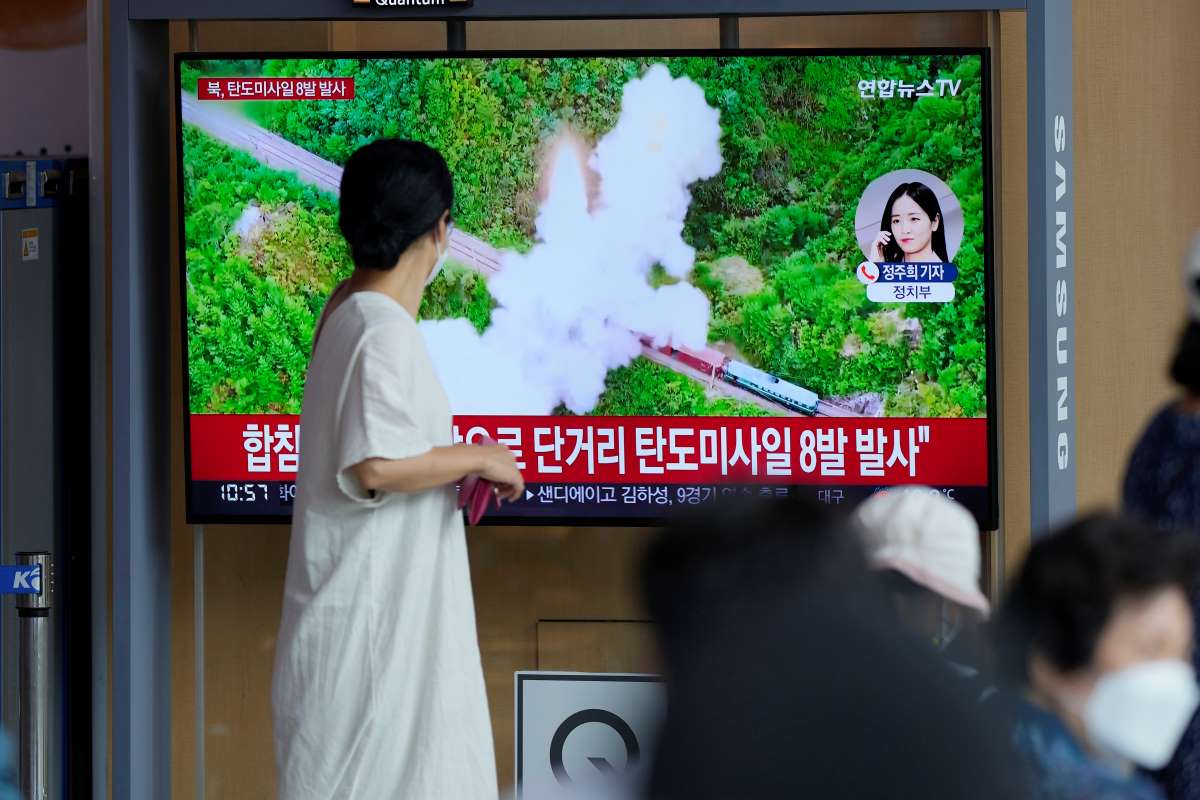 People watch reports on a series of North Korean missile launches on June 5 and earlier in 2022, on a TV screen at a train station in Seoul, South Korea, June 5, 2022. (AP Photo/Lee Jin-man)

Once again North Korea is busy launching ballistic missiles. In fact, this year that country has already launched missiles, including cruise missiles, at least 17 times.

Furthermore, in this latest round of provocations, there were six confirmed launchings in rapid succession. That is certainly abnormal. This development represents a very serious challenge for the security of Japan and the entire world.

On June 5, Defense Minister Nobuo Kishi announced that on the same day North Korea had launched at least six missiles from more than three locations. Kishi said that at least one of the missiles had a variable trajectory, suggesting it might have the ability to maneuver in order to evade missile defenses.

According to the South Korean Joint Chiefs of Staff, eight short-range ballistic missiles were launched in the direction of the Japan Sea from four locations, including the Sunan area near the North Korean capital of Pyongyang.

All the missiles landed in the ocean outside of Japan’s exclusive economic zone. Up to now, there have been no reports of aircraft or ships having suffered damage as a result of the missile launchings. Nevertheless, these launchings were extremely dangerous.

The threat posed to Japan by North Korean missiles is clearly rising. International society must stand as one in forcing North Korea to desist from such reckless behavior.

“We cannot tolerate these acts which threaten the peace and stability of international society,” said Prime Minister Fumio Kishida, referring to the missile launchings. The Japanese government, which does not have formal relations with North Korea, used diplomatic channels in Beijing to register protest of the missile launchings with Pyongyang.

Senior officials charged with issues related to North Korea from Japan, the United States, and South Korea also spoke by phone. They reportedly shared the feeling that North Korea’s actions posed a “clear and severe challenge to the international community.”

The unprecedented frequency of new missile tests by North Korea, and the fact that they are saturation attacks launched from multiple locations nearly simultaneously, indicates that North Korea is aiming to increase its attack capabilities.

The latest launchings came just after the completion of US-South Korean joint naval exercises from June 2 to 4 in international waters southeast of Okinawa. Those exercises included participation by the nuclear aircraft carrier USS Ronald Reagan.

The missile launches appear to have been designed to register Pyongyang’s displeasure with the joint naval exercises. The missile tests might also have been meant to create the impression that, even though North Korea is currently being ravaged by COVID-19, it will not allow the pandemic to interfere with its nuclear and missile development programs.

It also constituted clear proof that China and Russia do not merit being UN Security Council members.

Defying belief, at the end of May, North Korea assumed the presidency of the UN Conference on Disarmament, which is a forum for discussion of various arms reduction issues including for nuclear weapons. And it presided over a general conference meeting. Pyongyang’s reckless missile launchings took place immediately after that.

Japan must now strengthen its cooperation with not just the US and South Korea, but international society as a whole, in order to further increase both economic and military pressure on North Korea.