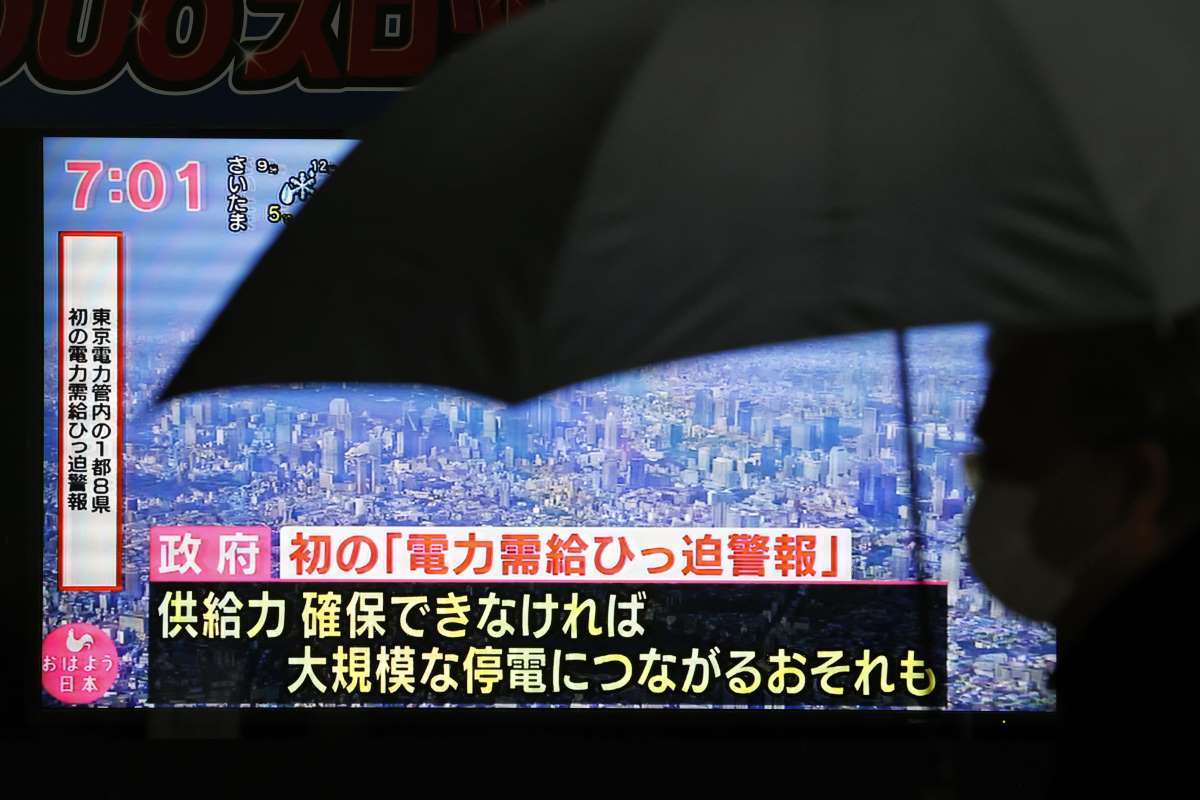 A street monitor in the Yurakucho district of Tokyo's city center announces the power supply shortage and blackout warning within the TEPCO service area, including all of Tokyo, on the evening of March 22, 2022

The Ministry of Economy, Trade and Industry (METI) compiled an electricity supply-demand outlook, showing Japan will once again be under a nationwide energy strain next winter.

It is expected that the electricity supply reserve rate will fall into negative territory within the Tokyo Electric Power Company Holdings Inc (TEPCO) service area, including the Tokyo metropolitan area.

In March, East Japan’s power supply-demand conditions were so tight that Japan faced a crisis, triggering the first-ever power supply warning. We must strictly acknowledge that power shortages in TEPCO service areas have become the norm. And, along with the early reactivation of nuclear reactors that have been confirmed safe, measures to boost the power supply must be expedited.

Moreover, continued investment is also crucial to ensure the availability of a stable supply of power. That includes rebuilding aging thermal power plants. Mechanisms guaranteeing the recovery of invested funds should also be considered to encourage power companies to overcome their caution about making new investments in the face of decarbonization and electricity deregulation.

According to METI, with the exception of Hokkaido, Tohoku, and Okinawa, the country’s electricity supply will be under strain when the reserve power capacity ratio drops below the 3% safety margin in the coldest months of January and February next winter. While smooth power interchange is a matter of due course, preparations should also be made for orders restricting the electricity usage of large quantity users during a power crunch.

The power supply shortage in TEPCO’s service area is especially serious. The reserve ratio for January and February 2023 is likely to be -1.7% and -1.5%, respectively, putting it below the necessary supply capacity level. One reason for this is the impact of the March 2022 earthquake off Fukushima Prefecture which, along with other factors, has put the restoration of idle thermal power plants in limbo.

METI has responded, saying it has plans to restart aging thermal power plants, as well as purchase surplus electricity from factories and other sources. Even so, the fear remains that these measures may not be able to overcome the supply shortage. Hence, there is an urgent need to establish a system that informs users when supply-demand ratio becomes tight and asks them to conserve electricity as quickly as possible.

Tightening of the supply-demand balance for electricity in winter is due to the increasing power demand that accompanies cold temperatures. At the same time, solar power units, which have been installed in massive quantities, do not function in bad weather. What is needed is expedited construction of power facilities that would not be affected by the weather so that a stable supply of electricity can be established to support the nation.

Restarting existing nuclear plants that are safe should also be promoted so that power supply can be increased. Electricity bills are soaring due to the global hike in energy costs, and becoming a heavy burden on household budgets. The use of nuclear energy can help us break away from a supply-demand balance that relies on conserving energy and will also help curb our electricity bills.

METI has been promoting the liberalization of the electric power market in order to encourage competition. But this has become a major factor impairing a stable power supply. We must take a hard look at reality and not hesitate to reconsider this policy.