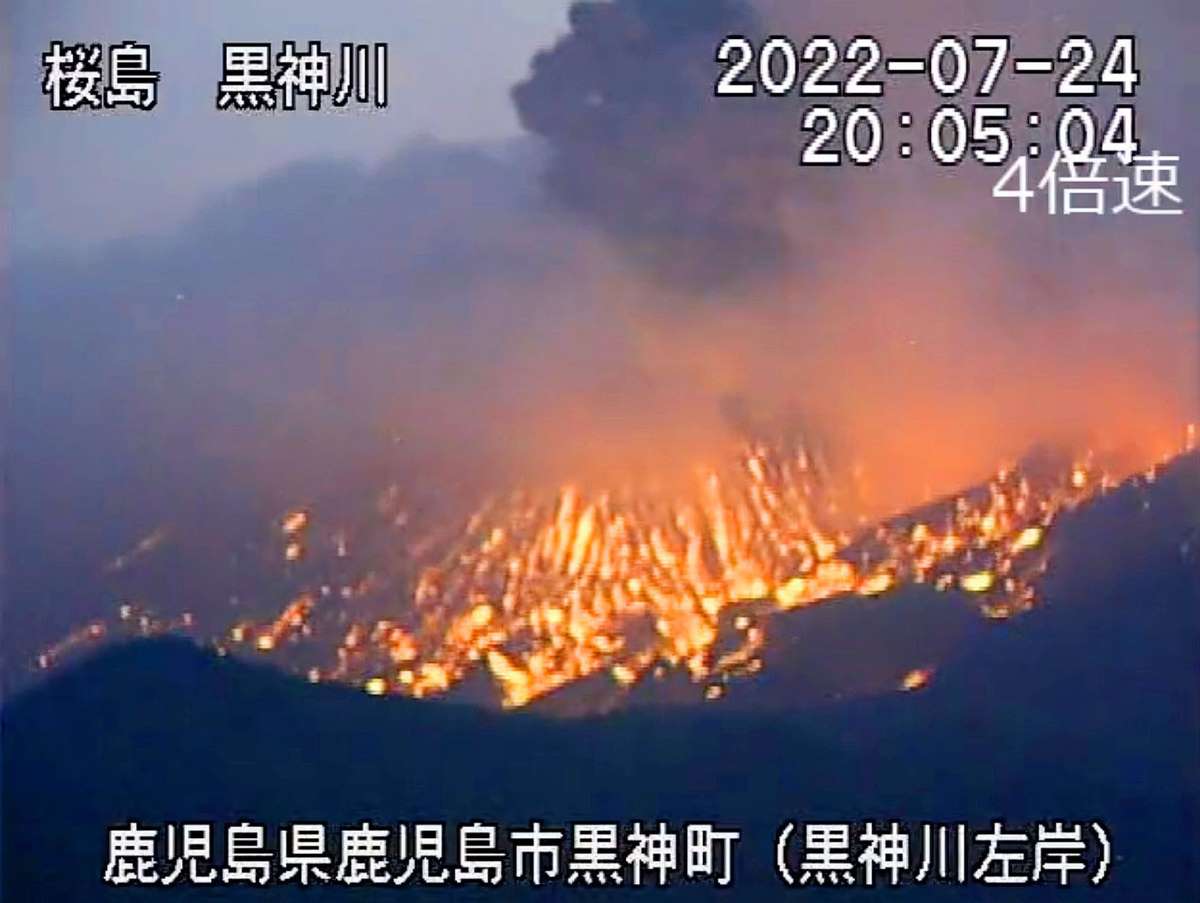 Sakurajima, Kagoshima at the time of the eruption on the night of July 24, 2022 (from video of the Ministry of Land, Infrastructure, Transport and Tourism Osumi River and National Highway Office)

Sakurajima in Kagoshima Prefecture exploded in a volcanic eruption on July 24, causing volcanic rock to fly 2.5 kilometers from the crater.

The incident prompted the Japan Meteorological Agency (JMA) to issue a Level 5 evacuation order, the highest level of alert for volcanic activity.

It was the first time that a lLevel 5 was issued for a volcano in Japan since the 2015 eruption of Kuchinoerabujima, and the first time ever for Sakurajima.

JMA said that the expansion of the volcanic edifice (where pressure from the lava appears) on the mountain was small-scale and the agency is not anticipating another large eruption.

Hopefully this is true. But in the 21st Ccentury, Sakurajima’s volcanic activity has been rising. There were 755 eruptions in 2009, and the number has been rising since then. That represented a rapid increase of nearly ten10 times greater frequency than in 2008, the previous year.

Subsequently, a record-breaking number of 1,000 eruptions continued every year for the five years leading up to 2015.

The July 24 eruption was a huge surprise, considering that volcanic activities havead been lower since 2016, when eruptions decreased to 153 for the year. In the following years they did not exceed 500 per year, and in 2021 only 145 eruptions were recorded. Moreover, only 15 eruptions had been recorded in 2022 up to the month of June.

Sakurajima has a history of experiencing the massive Taisho Eruption in 1914, when the lava flow connected the island to the Osumi Peninsula at the southernmost end of Kyushu. We should not forget that the disaster took some 60 lives.

Although the primary magma chamber located below the Kagoshima Bay seafloor shrank after the Taisho Eruption, it is estimated to have almost fully recharged over the span of approximately 100 years since then. Sakurajima is currently in such a stage.

Eruptions from the summit crater in recent years, including the explosive ones, are considered to belong in the small-scale group of eruptions from Sakurajima.

Experts caution that large-scale explosions like that of the Taisho Eruption are possible. The Eexisting fire vents would not be enough if built-up pressure causes a massive flood of magma from the underground chambers, experts warn. The magma will look for new eruption routes, likely seeking to break through exits along the mountainside , where less upward energy is required.

Kyoto University maintains a volcano observatory station at Sakurajima, and tight cooperation with Kagoshima City and the Kagoshima Prefecture disaster prevention departments can be expected. But because the direction from which the lava flows will come can be unpredictable, making damage prevention among villages along the mountainside might become more difficult.

Not only is the The Japan archipelago is not only  located in the Pacific Rim orogenic belt, but the country’s volcanoes are also in an active eruptive phase. However, there are only a handful of volcanologists and seismologists, stretching the team thinly as it attempts to monitor Japan’s volcanic lineup.

An eruption at Mount Fuji could also be triggered by a Nankai Trough quake. And a close eye must absolutely be kept on the potential for eruption on Izu Oshima. It’s now or never. We must upgrade our system for earthquake and volcano observation and disaster prevention research to save lives.