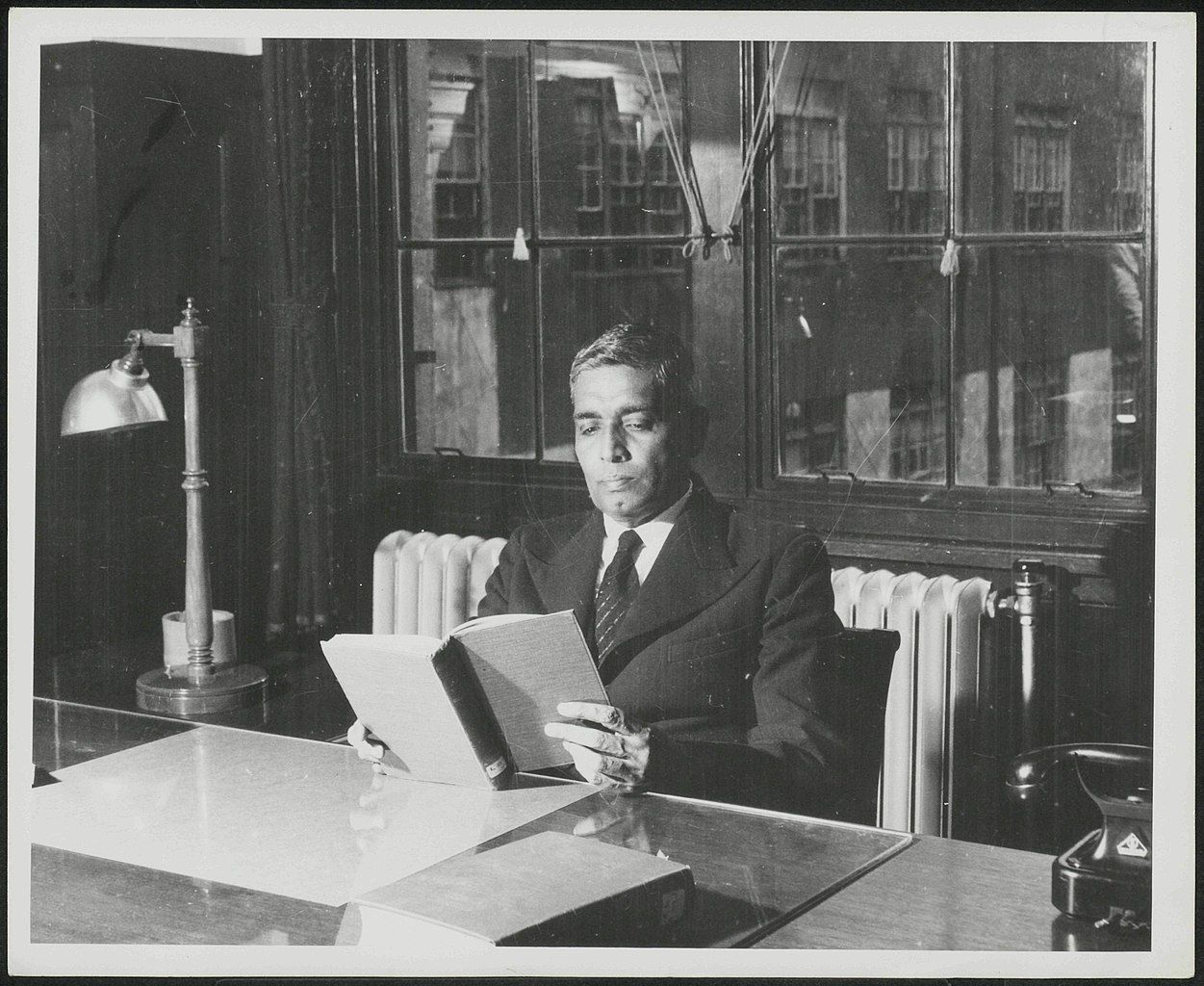 Justice Radhabinod Pal in his office. From the collection of fellow Tokyo Trials Justice Bert Röling, in the National Archives of The Netherlands. (Public record, via Wikimedia Commons.)

Following his dissentient judgment in Tokyo, Justice Radhabinod Pal was invited by Calcutta University to deliver the “Tagore Lectures in Law.” In 1951, he was again invited to speak on crimes in international relations.

By this time, he was a famous man in the field of international law. His full Tokyo judgment had not yet been published, but the gist of it was widely known. And he used the lectures to review the judgment and its legal and philosophical justifications.

These justifications, in fact, often came out more sharply in the lectures than in the judgment itself.

Pal’s dissent revealed critical insights into the relationship between imperialism and the development of international law. According to Indian political psychologist and social theorist Ashis Nandy, whatever people might have said of Justice Pal while introducing him in public meetings, his main claim to fame was his membership as a justice of the International Military Tribunal for the Far East (IMFTE).

Most Calcuttans whom Nandy knew admired Pal for his “unconventional” views and dissenting judgment at Tokyo. The literate Bengalis called it the “first Asian victory over a European imperial power.”

The eventual trajectory, undertaken by Pal thus, can be seen not as an aberration but as the logical culmination of trends revealed in his dissent. Moreover, his analysis of the imperialist logic of global politics remains insightful, revealing something fundamental about the nature of postwar settlement ー and what would follow from it.

The imperialism he experienced — intellectually and politically — took the form of colonial rule. Yet, Pal seemed to be aware of the possibility of the continued existence of imperialism even without direct rule over vast territories.

Despite the vocal anti-colonial position of the United States, Pal remained a strident critic of US militarism, both in the lead-up to, and immediate aftermath of World War II. Pal was critical of US President Franklin D Roosevelt for his anti-colonial stance, and US Secretary of State Cordell Hull of pushing for war through interventions in the Far East, and the economic strangulation of Japan in particular.

For Pal, the prominent participation of the United States in the postwar tribunals was hardly the sign of a new world order that would be fundamentally different from the past. These efforts represented, in his opinion, a conscious attempt to manufacture a particular narrative that would justify the logic and continuation of imperialist policies, particularly in the Asian continent.

Pal’s analysis was especially focused on the past actions of the Western powers and their colonial history, before turning gaze onto Japan. According to Kei Ushimura’s 2004 journal article for The American Historical Review, titled “Beyond the “Judgment of Civilization”: The Intellectual Legacy of the Japanese War Crimes Trials, 1946–1949,” this was distinct in both its form and content. And it was unmistakably the view of a non-Westerner.

In rejecting the legality of the IMTFE, Pal identified imperialism and colonialism as crimes far greater than aggression. His anti-colonial sentiments were strong and clear as he looked to decimate the imperial status quo.

Pal recalled the history of violence in the use of prosecuting powers in Asia, and warned that they might deploy the charge for their own self-interests. For Justice Pal, restraint in the anti-colonial struggle was simply unacceptable. The colonized, he said, “cannot be made to submit to eternal domination only in the name of peace.”

Despite being considered quite incendiary at that time, Justice Pal’s dissenting opinion has been largely ignored by International Relations’ scholars in the analysis of the development of legal norms and institutions in global politics.

In Japan, the Indian judge is remembered by more Japanese than his own countrymen more than 50 years after his death. The name Radhabinod Pal from India echoes to this day.

A memorial at Tokyo’s Yasukuni Shrine has been dedicated to Justice Pal in respect for his vehement dissent at the post-World War II International Military Tribunal for the Far East.

Near Hakone at the foot of Mount Fuji, the Pal-Shimonaka Memorial Hall serves as a temple and memorial to Pal and renowned Japanese publisher Yasaburo Shimonaka, who bore witness to Pal’s historic judgment.

The message at the dedication of the Pal-Shimonaka Memorial Hall, engraved in Bengali and English, says: “For the peace of those departed souls who took upon themselves the solemn vow (mantradiksita) at the salvation ceremony (muktiyajna) of oppressed Asia.”

The message then goes on to quote a classical Sanskrit text, “tvaya rsikesa rdisthitena yatha niyukto’smi tatha karomi (O Lord, thou being in my heart, I do as appointed by you).”

‘Only Asian Nation that Stood Up to the West’

These memorialized remarks serve as a backdrop to the judicial verdict of Justice Pal, who lived the 20 years of his life in independent India and visited Japan for the last time in 1966. In a speech during that last visit, he provided additional insight into his perceptions, however. He stated how much he admired Japan from an early age for being the “only Asian nation that stood up against the West.”

Justice Radhabinod Pal breathed his last on January 10, 1967, in Calcutta, leaving behind his legacy that continues to be respected, and debated, in Japan and India, even now.