EDITORIAL | Sanctions, Condemnation the Only Response to Russia’s Invasion of Ukraine 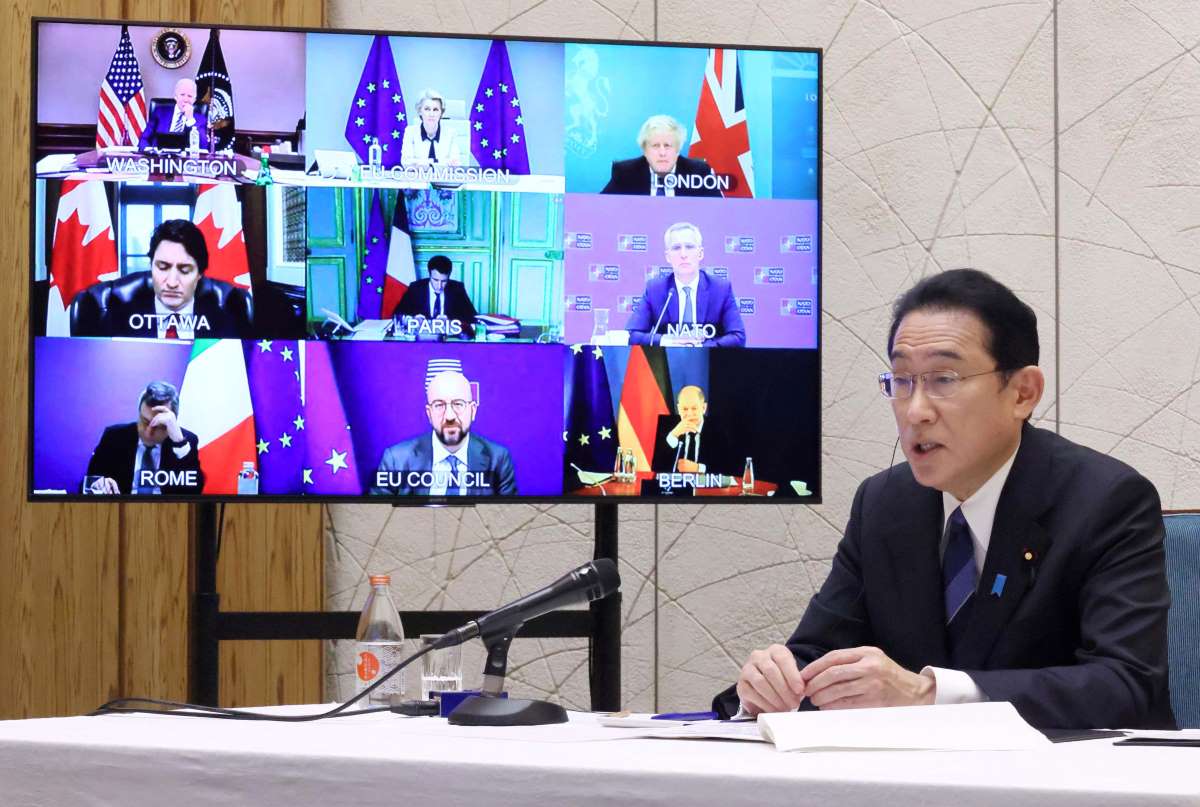 Prime Minister Kishida at the video conference of G7 leaders over the Russian invasion of Ukraine (February 24, 2022, in the Prime Minister's Office) Photo: courtesy of Cabinet Public Relations Office.

The world is now witnessing a reckless act of barbarism of historical dimensions and the largest subversion of the global order since the end of the Cold War.

On February 24, Russian President Vladimir Putin launched a military invasion of neighboring Ukraine. This is a clear act of aggression against a sovereign nation that has been independent since the collapse of the Soviet Union in December 1991. The aggression is absolutely unforgivable.

The confrontation between the free and democratic nations of the West — including Japan, the United States, and European nations — and the invader Russia has become a decisive one. The West must quickly implement very strong sanctions that will prevent the Putin regime from achieving its military and political ambitions.

The United Kingdom has made clear its intention to carry out financial and economic sanctions targeting Putin and his oligarch cronies. Germany too has acted by announcing that it will not certify operation of the Nord Stream 2 natural gas pipeline through the Baltic Sea.

To date, Japan has only announced symbolic economic sanctions, but on Thursday Prime Minister Fumio Kishida told the House of Councillors Budget Committee, “If the situation deteriorates further, we must immediately consider further measures in cooperation with the international community.”

Hopefully, the Japanese government will exhibit strong resolve in doing so.

Claiming that it was intervening to protect these two regions, the Russian military has employed missiles and other precision guided munitions in attacks on Ukrainian military facilities and airports in various parts of the country, including the capital of Kyiv and Kharkiv.

Russia has already claimed to have “neutralized Ukrainian air defense systems.” It has also launched an offensive from Crimea, the island it annexed from Ukraine eight years ago.

United States President Joe Biden said in a statement that President Putin “has chosen a premeditated war that will bring a catastrophic loss of life and human suffering.”

He added, “The United States and its allies and partners will respond in a united and decisive way…. The world will hold Russia accountable,” Biden stressed.

In a teleconference with Biden, Ukraine President Volodymyr Zelenskyy strongly condemned Russia for its “unprovoked and unjustified attack.”

The Putin government claims that the goal of its intervention is “to protect the people that have been subjected to abuse and genocide from the Kyiv regime…and to demilitarize and de-Nazify Ukraine.”

Such blatant lying is mind-boggling. Such wanton self-justification is impossible to accept.

In the fierce propaganda war that preceded the invasion, Russia claimed that the pro-Russians in East Ukraine were the victims of genocide without providing one scintilla of evidence to support such an explosive accusation.

It is notable that in an article published in July 2021, Putin argued, “The Russians and Ukrainians are one people…[and] true sovereignty of Ukraine is only possible in partnership with Russia.”

And in an address to the Russian people before the invasion commenced, Putin declared, “It (Ukraine) is an inalienable part of our own history, culture, and spiritual space.”

Even assuming that the roots of the two peoples are the same, that is no justification for using force to attack a free and sovereign nation and seize its territory.

Putin has repeatedly stated that the West has reneged on its promise not to expand the North Atlantic Treaty Organization (NATO) membership eastward. But this is nothing but rank propaganda.

There is no official diplomatic document stating any such thing. Furthermore, Putin’s statement that “If Ukraine joined NATO, Russia could come under attack” is nothing but a delusion in the mind of the Russian president.

In 2008, Putin lamented that “the breakup of the Soviet Union was the greatest geopolitical tragedy of the 20th century” when he launched an attack on Georgia, which had become an independent nation following the dissolution of the Soviet Union.

The goal in 2008 was to use Russian military might to help two pro-Russian regions gain “independence” and then recognize them as national governments. He has used the same playbook this time around.

Putin’s invasion violates the terms of the 2015 Minsk Agreement on a comprehensive ceasefire for two regions in the eastern Ukraine, as well as the United Nations Charter.

It also violates the 1994 Budapest Memorandum on Security Assurances, under which Ukraine turned over all its nuclear weapons it retained from the Soviet era to Russia for dismantling in return for a guarantee from Moscow that its territorial integrity and sovereignty would be respected.

In the light of past history, it was no wonder that the nations of Eastern Europe that had been Soviet satellites and the three Baltic states (Lithuania, Latvia and Estonia) that were constituent republics within the Soviet Union should have opted to join NATO.

If Russia’s leader continues to cling to his imperialist ambitions, the result is certain to be that not only the Ukrainian people but the Russian people as well will find themselves mired in an abyss of suffering.

Mr. Putin must remove his troops from Ukraine at once.