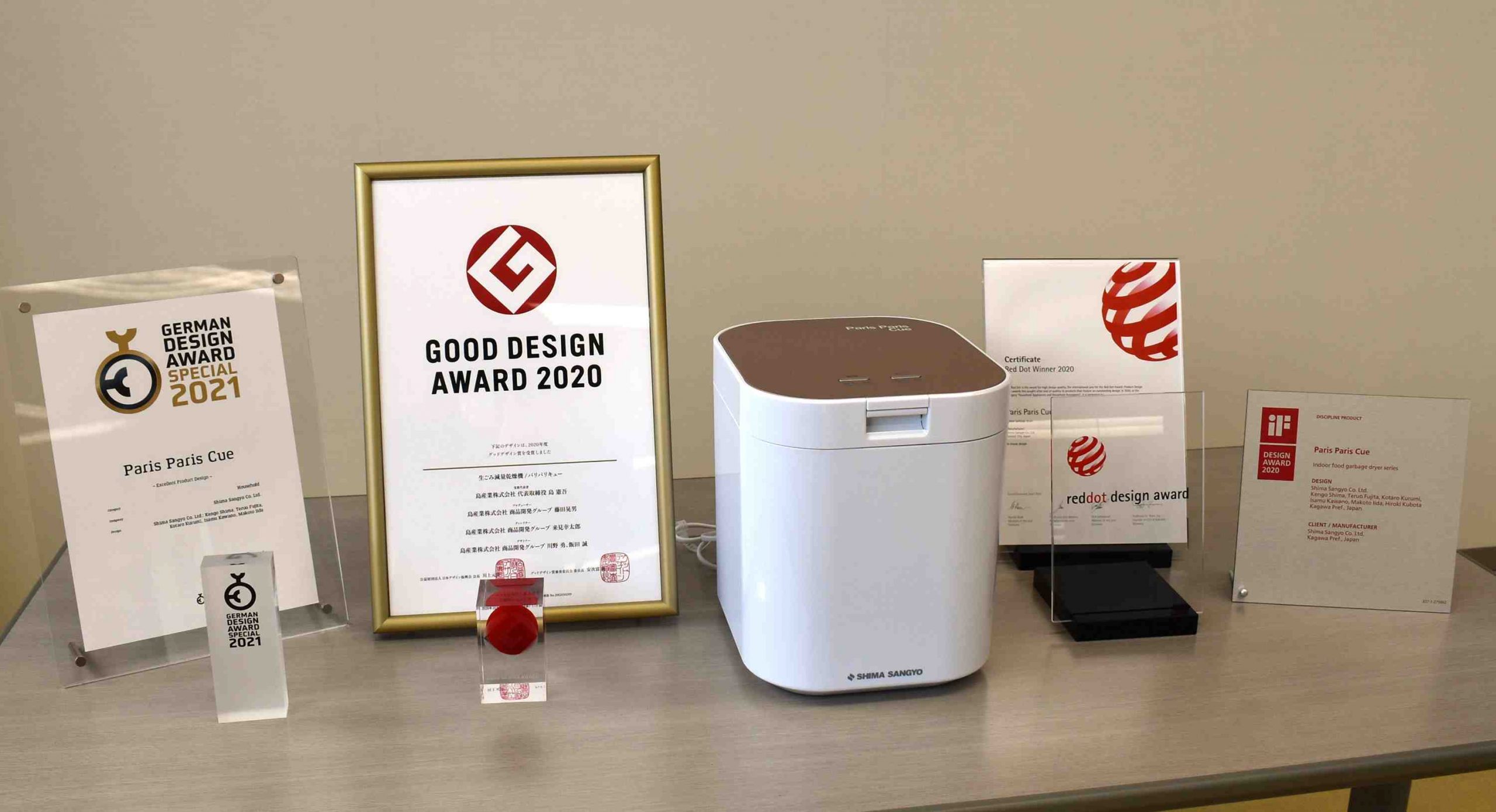 
Highest Rating in Design in Japan and Overseas

Launched last year by Shima Sangyo Co., Ltd., (Kanonji-shi, Kagawa Prefecture), the “Paris Paris Cue” is a cube-shaped home-use garbage disposal system that uses warm air to dry food waste and reduce foul odor. The product’s high performance and exterior design, which blends in nicely in kitchens, has been well-received, earning it international design awards, as well as one of the most prestigious domestic awards.

The company is generally in the business of designing waste disposal plants for larger facilities. Yet, it’s home-use food waste reduction dryer series has sold over 100,000 units in total. At The Sankei Shimbun and JAPAN Forward, we decided to look into the secret of its success.

Weight of Waste Reduced to 1/5

Vegetables, like cabbage and carrots that are dehydrated using the Paris Paris Cube, are light in weight and feel as though they could crumble like dry leaves when squeezed tight in your hands. When I brought the container close to my nose, it gave off a fragrant scent. The first part of the product’s name, “Pari Pari”, comes from the cracking sound of something being crushed, and the last part, “Cue,” from the sound the dried foods make, like dry leaves being stepped on.

It’s easy to use. All you need to do is gather the food waste into a basket, open the top lid and set the basket inside, then turn on the switch. Warm air is blown onto the waste, and within hours, it dries up. Waste weight is reduced to about 1/5 of its original, and its volume also shrinks.

It will not spoil, which means there is no problem with foul odor and bugs. Processed waste can be disposed as combustible garbage or even used as fertilizer for your home garden.

Mr. Akio Fujita, deputy director of the company’s product development group, told us, “Sales have exceeded 300% of what we expected since its launch in April [2020] .” It was even adopted by the local town of Kanonji’s furosato noze program, and sent as a thank you gift to those who donated funds to supplement tax revenues in rural areas of Japan.

Not only does it eliminate food waste problems such as odor, bugs and moisture, the product’s exterior appears to be one of the reasons for its popularity. The unit is compact in size and has a simple design with white as its base color. It features an appearance that will not look out of place when lined up next to the rice cooker or microwave oven in your kitchen.

Hailed for its design and functionality, the product was selected for the world-renowned “iF Design Guide 2020” and “Red Dot Design Award 2020”, as well as receiving the special mention category in the “German Design Award 2021”. The dryer also won one of the leading domestic awards, the “Good Design Award 2020”.

The company’s president and a few members from the development team were responsible for its design. The colors and forms were decided through repeated prototyping. Mr. Fujita noted appreciatively, “The value of our product was recognized. It gives us confidence in the development and sales process when a product that was conceived and produced in-house has been given such high marks.”

Originally, Shima Sangyo’s main business focused on the design, construction, and maintenance of waste disposal and recycling facilities. Then, the company heard from local government officials about the problems it faced with trash. Issues that were brought up were about the aging incinerators and the lack of progress in the reduction of food waste. Wanting to see what they could do about it, the company started designing food waste dryers to reduce the bulk of trash.

Up until now, households had the option of disposing of food waste by fermenting it inside a compost bin set up in their backyard or farm field, or adding powdered microbial agents and decomposing it using electricity, or by drying it. But these techniques were not widespread due to the odor and noise made during the processing.

In recent years, more and more municipalities are subsidizing the expense of food waste disposers and encouraging residents to use them to reduce the volume of garbage. The positive impact from their use has generated a total sales volume surpassing 100,000 units in 7 years since the launch of the series.

Regardless, the market penetration rate is low overall. As the company says, “There is still a lot more room for growth. We want to make people’s lives better and reduce waste.”

RELATED: How Japan is Helping Make the Global Economy Sustainable