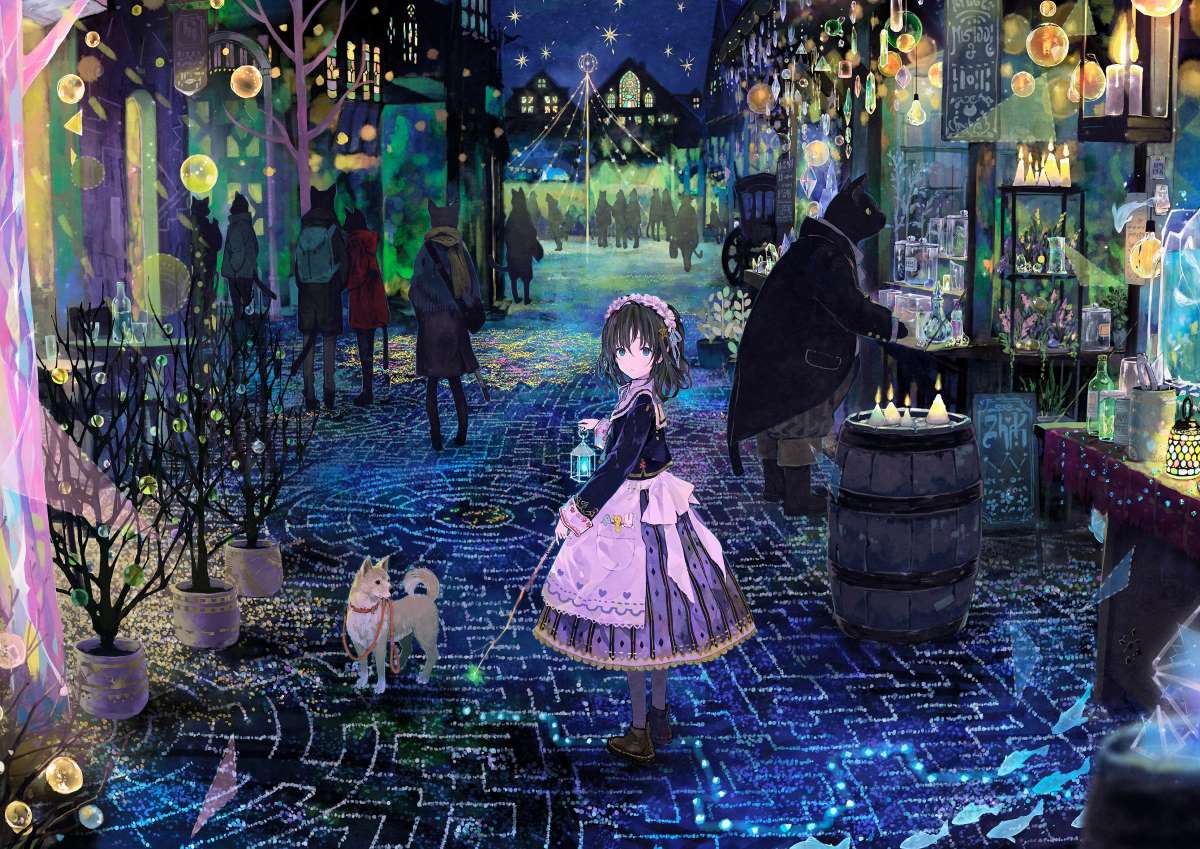 The twelfth annual version of one of Japan’s premier manga art exhibitions, which is sponsored by Sankei Shimbun, opened in downtown Tokyo on Friday April 29.

Like the famous ukiyo-e woodblock print artists of the Edo period (1603-1868), today’s manga artists and illustrators, who have played a large role in popularizing Japanese culture globally, are sometimes referred to as eshi (artists).

The theme for “Eshi 100 Artists Exhibition 12” (Eshi Hyakunin Ten 12), an exhibition of works by some of today’s most distinguished manga artists, is michi. It is a term which means road or path, of the way of something.

In fact, works by 104 artists will be on display at Akiba Square, which is located in Tokyo’s Chiyoda Ward near Akihabara Station. The exhibition provides a good psychological escape since the various restrictions necessitated by COVID-19 have been lifted.

Envy Lurking Behind the Cuteness

A young girl with green hair is literally chewing on a path along which colorful teddy bears resembling gummy fruit drops are walking. Although she is surrounded by cute articles in fashionable pop colors and she seems to be smiling, her eyes are filled with tears.

This is a scene from “Envy Green,” drawn by the female artist Shiro Usazaki (24). Usazaki is a very popular artist whose works are being displayed for the first time at Eshi 100. The title “Envy Green” is intended as a pun on the word “Evergreen.” Although on the outside a young person might appear glowing with health and vitality, inside she may be possessed by disturbing thoughts when comparing herself with others.

Usazaki says that when she considered the theme michi, the first thing that came to mind was the expression “The grass is always greener on the other side.”

“In this picture I was trying to capture the feeling that the girl is thinking,” says Usazaki, “that the path other people are on is fashionable and cute, just like it is as sweet as candy.” That’s why she drew the path and other objects in front of the girl as more colorful than her features.

“I’m happy if people can get the stark contrasts between the color shading and degree of brightness,” she adds.

No doubt many of us got lost trying to find the right path when we were children. We were so anxious we wanted to burst into tears, but also got a bit of a risk-taking thrill venturing into an environment out of the ordinary for us. “Losing One’s Way” (Mayoi Michi) by Otohiko Takano, an artist who is known for her distinctive designs with a fairytale feeling, captures memories of such occasions presented in an illusionary setting.

A young girl is walking along a dark path at night in which everything is suffused with a surreal bluish glow. Look closely and you can make out the people who appear to be residents of the street. Or are they actually cats?

The girl’s face betrays her unease, but at the same time she seems exhilarated by the adventure. The interpretation all depends on the imagination of the viewer.

Takano admits that she herself has a terrible sense of direction. She is quick to add, however, that she does not really mind “the sense of helplessness and despair she feels when she ends up in some totally wrong place.” The festive feeling of the painting makes the viewer feel as if “this is the start of an adventure.”

A Crossroads in Life

Choko Fuji’s painting titled “Bridal Procession of the Fox” (Kitsune no Yomeiri) offers a different take on the theme of michi. She explains how she came up with this concept as follows:

“I chose the motif of a fox about to get married to explore the theme of setting out on the long path of life with another person.”

The painting shows a fox in full bridal costume, with her fox ears sticking up under her headscarf (as well as her tail protruding from below the back of the kimono). The fox bride is shown as breathtakingly beautiful.

Fox weddings were a favorite subject in premodern Japanese folk art. The screen in the center background includes depictions of pairs of birds. Fuji apparently tried to eliminate perspective as much as possible to give it the feel of Nihonga (Japanese-style) painting.

On the bottom hem of the vulpine bride’s pure white wedding kimono you can see a bridal procession of foxes. (There are also foxes at the bottom of the screen in the back). In fact, there is still another fox hidden in the picture.

“Since the painting is going to be shown in large size at the exhibition, I would be happy if visitors look for it,” says Ms. Fuji.

Other Worlds to Explore

There are any number of other works at the exhibition that express the individual world views of the eshi artists on display.

Some show scenes related to the “ways” of tea (sado, chado) and flower arranging (kado). Others depict “my way”— the personal paths that young girls have followed—in which the artists look back at the paths that they themselves have trod.

How about visiting the exhibition to appreciate the works yourself, recalling the michi that brought you to where you are today and contemplating the road you will take from this point on?

COVID-19 Protocols: Due to the COVID-19 pandemic, please wear a mask and observe other necessary precautions while at the exhibition.

Additional Information: is available, mostly in Japanese, at the event website, here.

(Read the announcement in Japanese at this link.)