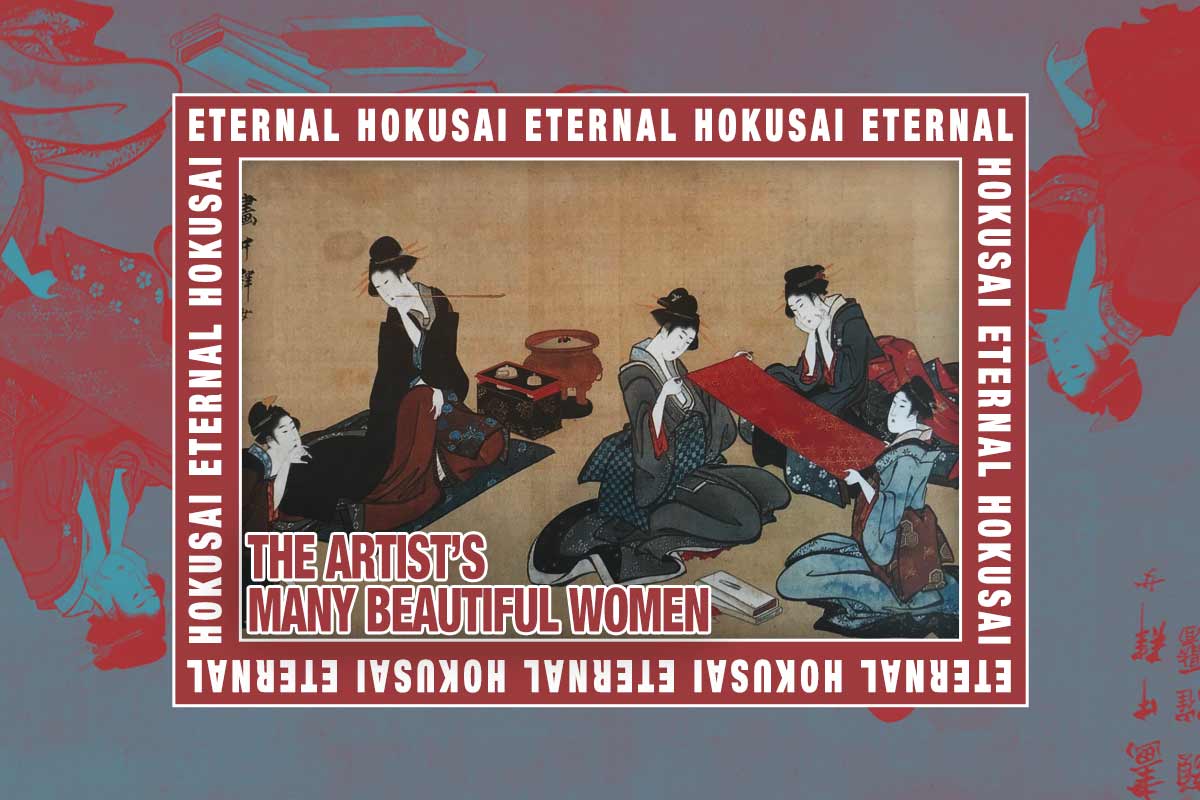 Today Hokusai is best known today for his outstanding Thirty-Six Views of Mount Fuji. However, when he designed and published these print series, Hokusai had already made his name as an artist several decades earlier.

At the beginning of the 19th century, when Hokusai was in his forties and first became popular in Edo (present-day Tokyo), he mainly devoted himself to paintings and book illustrations. In other words, Hokusai not only designed innovative landscapes, but was also adept at drawing human subjects, from dynamic depictions of fierce warriors to pictures of beautiful women in stunning kimonos.

Pictures of beautiful women, known in Japanese as bijinga, are the oldest subgenre of ukiyo-e. While “ukiyo-e” eventually came to be used for all genres from landscapes to samurai, the term was originally used for pictures of female entertainers and kabuki actors. It was their world of ephemeral pleasure that ukiyo-e (pictures of the floating world) portrayed.

While most people familiar with ukiyo-e today mainly think of the genre as woodblock prints, especially outside Japan, where ukiyo-e prints are exhibited more regularly than paintings, the earliest ukiyo-e were small paintings of (mostly) female entertainers produced in large quantities by anonymous artists.

The first ukiyo-e artist who signed his works was Hishikawa Moronobu. His best known painting, Beauty Looking Back, functions like a mirror of fashion trends in late 17th-century Edo (figure 1). The woman wears a long-sleeved (furisode) kimono decorated with embroidered chrysanthemums on a luxurious red ground, a popular kimono design at the time. In her hair she wears an ornamental comb made of expensive tortoiseshell.

After studying with the ukiyo-e artist Katsukawa Shunshō, Hokusai first designed woodblock prints of kabuki actors and sumo wrestlers, but before long he began to specialize in pictures of beautiful women (bijinga).

By his forties, Hokusai was said to rival the most popular artist of this genre: Kitagawa Utamaro. After Utamaro’s death in 1806, Hokusai competed with Utagawa Toyokuni (1769-1825) to become his successor.

Like Utamaro, Hokusai would often draw high-ranking courtesans of the Yoshiwara pleasure district (figure 2). His High-Ranking Courtesan depicts a woman in a typical Hokusai style with a large number of hair ornaments, expensive safflower-based lip rouge, and her neck bending slightly to the side.

Not just her make-up and hair ornaments reveal she is a top-class courtesan. Over her checkered kimono she wears an outer robe (uchikake) decorated with pine needles, and an astonishing sash (obi) with auspicious patterns such as a sharp-eyed dragon and wish-granting jewels. Women like this courtesan were the celebrities of their day. They inspired the latest fashion trends in Edo, not unlike today’s models, musicians, and actors.

While Utamaro’s pictures of the beauties of the Yoshiwara were mainly sold as mass-produced woodblock prints to ordinary people, Hokusai’s paintings were generally luxurious artworks for an elite audience. Some of the patrons who commissioned these paintings were people of very high stature. One of Hokusai’s paintings is even thought to have been painted for the art-loving shogun Tokugawa Ienari (1773-1841).

Hokusai not only painted courtesans, but also ordinary townswomen. His Five Women (Figure 3) is an impressive painting that shows five women at leisure in a horizontal composition. In the foreground, two married women examine a length of tie-dyed fabric with a ruler, arguing where to cut it, or at least the scissors seen below seem to suggest so. The rich red fabric spreading across the scene enriches the painting.

A young woman in a long-sleeved (furisode) kimono can be seen behind the married woman who leans with her elbows on what must surely be another bundle of fabric. She is watching the other two women work. To the left back, there is a slightly older married woman with shaved eyebrows talking to a woman with her hair arranged in a topknot. The older woman holds a long tobacco pipe and wears a black haori over jacket.

These two remarkable paintings are only a fraction of Hokusai’s depictions of beautiful women, but they exemplify his mastery of the genre, and make clear why his work was in such high demand.