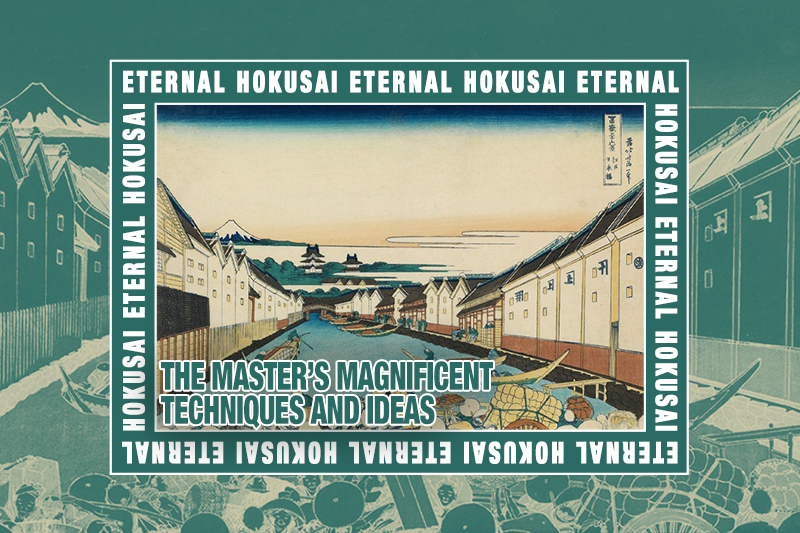 Part 5 of a series marking the artist’s 260th anniversary

This time, in the fifth part of the series “Eternal Hokusai,” I am introducing prints from Hokusai’s landmark series Thirty-Six Views of Mount Fuji to demonstrate how interesting his techniques and ideas were.

Thirty-Six Views of Mount Fuji is a series of full-color woodblock prints (ukiyo-e) that Hokusai designed when he was in his 70s. The series depicts Mount Fuji from various locations.

The series was published not just because Hokusai was a popular artist at the time, but also because Mount Fuji was widely worshipped in Edo (present-day Tokyo).

It is said that in the late Edo period (1603–1868), the metropolis included 808 sects dedicated to Mount Fuji, with 80,000 worshippers. From this number, we can tell that the veneration of Mount Fuji had also spread to include common people.

However, a publication advertisement for Thirty-Six Views of Mount Fuji indicates that Hokusai and his publisher did not simply intend to create a guide to famous sightseeing spots for Mount Fuji worship and mountain climbing. Their aim was to depict the sacred mountain from different locations, in different seasons, weather, and time of the day.

The images also do not simply eulogize Mount Fuji, but are made up of eccentric compositions, geometric compositions, and other surprising features. It is probably these elements that have made people feel attracted to the series across time and culture.

Between the late 18th and early 19th century, ukiyo-e artists first adopted Western linear perspective and designed so-called “perspective prints”. Hokusai also designed many of these pictures in his twenties.

By his 40s, he created Western-style landscape prints that applied the shading of copperplate engravings and oil paintings. By absorbing these Western painting techniques and applying his ingenuity beyond mere imitation, Hokusai was able to create landscape prints in his own style.

In his Thirty-Six Views of Mount Fuji, Hokusai used the Western perspective technique to create the illusion of depth. And he also created a number of unconventional compositions to express the expansion of space by boldly enlarging objects in the foreground and depicting small objects in the distance. 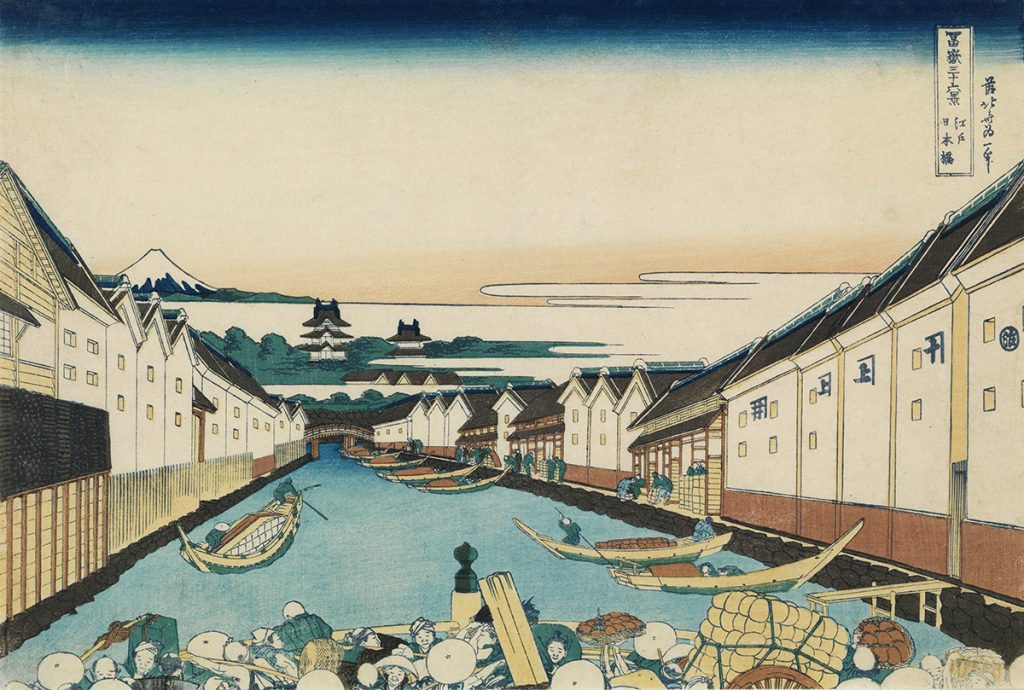 For example, let’s have a look at Nihonbashi Bridge in Edo, an example of Hokusai’s effective use of Western linear perspective.

This bridge marked the point where the main roads converged in Edo, making it a key transportation hub. It was also the economic center of Edo where cash flowed, with a fish market and large stores lining up nearby. Nihonbashi Bridge is only partially represented near the bottom of the composition. Much of the image is filled with the river, rows of warehouses, and the expansive sky, emphasized with Western linear perspective.

The print highlights the liveliness of Nihonbashi Bridge with its rows of warehouses and the vast space from the turrets of Edo Castle at the back of the picture to Mount Fuji in the upper left corner.

In recent years it has been pointed out that if you look from Nihonbashi towards Edo Castle, Mount Fuji is actually further to the left and would not fit within this picture pane, meaning that Hokusai’s image does not provide an accurate depiction of the area. This suggests that Hokusai was more concerned with the appearance of his composition than being faithful to the actual scene.

Illustration from Sketches by Hokusai, 3 volumes, the drawing method of divided three, showing his interest in Western linear perspective.

A World Made up of Circles and Triangles

In his Thirty-Six Views of Mount Fuji, Hokusai uses the triangular shape of Mount Fuji as a point of reference, and the geometric shapes of other objects, including triangles, circles and arcs.

In Easy to Learn Abbreviated Pictures, an instruction book to drawing pictures, Hokusai claims that he could represent animals, people, landscapes, and all sorts of things with corners and circles, and it is likely that he tried to draw them with a ruler and compass. Let’s try to decipher the geometric shapes of zeros and triangles that Hokusai hid in his compositions.

First, have a look at Fujimibara in Owari Province and try to find the circle and triangle that Hokusai has hidden in this print. 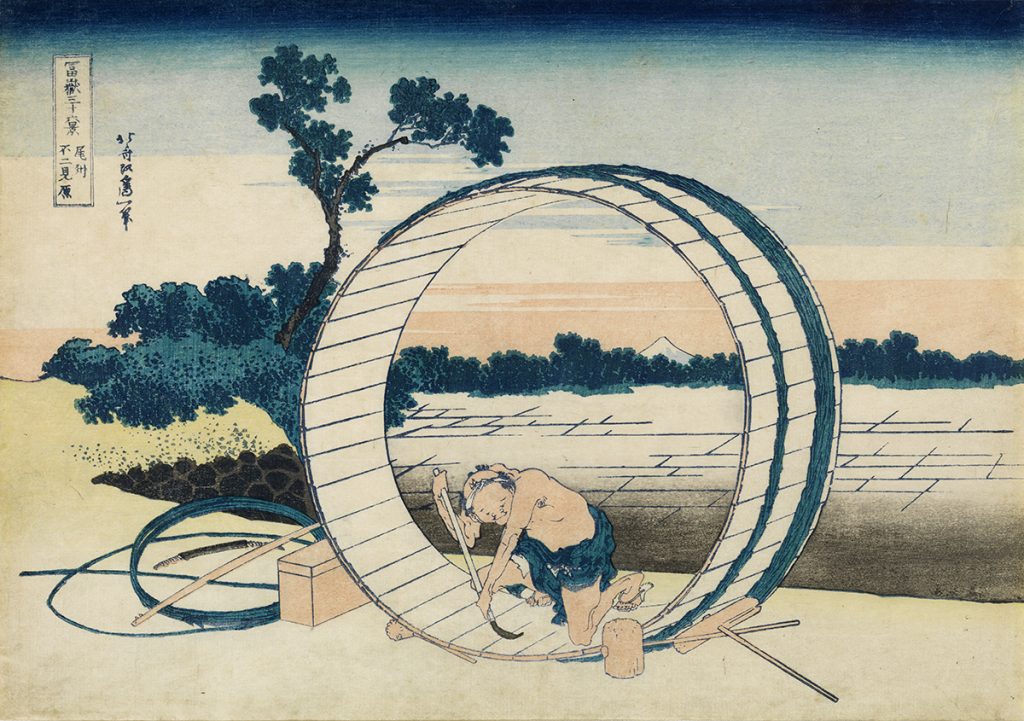 The circle is a huge round barrel made by the barrel maker, and the triangle is a small Mount Fuji. Fujimibara is located at the eastern end of the plateau of Nagoya Castle (present-day Naka Ward, Nagoya City, Aichi Prefecture). It was a scenic spot where you could see the mountains far in the distance from the fields appearing below the cliffs.

Although this painting also depicts a vast landscape of cliffs and fields behind the barrel maker, the mountains from the suburbs to the Kiso Valley and Shinshū Province, which should have been visible, are omitted and Mount Fuji appears beyond the forest.

Hokusai may have traveled to the region during his visit to Nagoya in the Bunka era (1804–18), but he was probably less concerned with the actual scenery. Instead, he experimented with a new kind of composition, in which Mount Fuji appears as a small triangle seen through a huge round barrel.

Within ukiyo-e, there are various genres, from pictures of actors (yakusha-e) to pictures of beautiful women (bijinga), and pictures of famous places (meisho-e). Hokusai’s Thirty-Six Views of Mount Fuji belongs to the latter of these genres.

However, the places that Hokusai depicted in this series were not really famous places. It is unclear on what Hokusai based the compositions of the three great masterpieces in his series ーSouth Wind, Clear Sky, Under the Wave off Kanagawa, and Rainstorm Beneath the Summit.

Rather than focusing on famous places, Hokusai concentrated on nature itself, and the ever-changing appearance of Mount Fuji, while cutting down on excess imagery.

Let’s have a look at Under the Wave off Kanagawa, one of the series’ masterpieces, simply known as “The Great Wave” outside Japan. From the title of the print, we know that Hokusai depicted a view of Mount Fuji from the post town Kanagawa (present-day Yokohama City, Kanagawa Prefecture), the third station on the Tōkaidō Road that connected Edo and Kyoto. Yet without the title, it would be hard to know which place the print depicts. 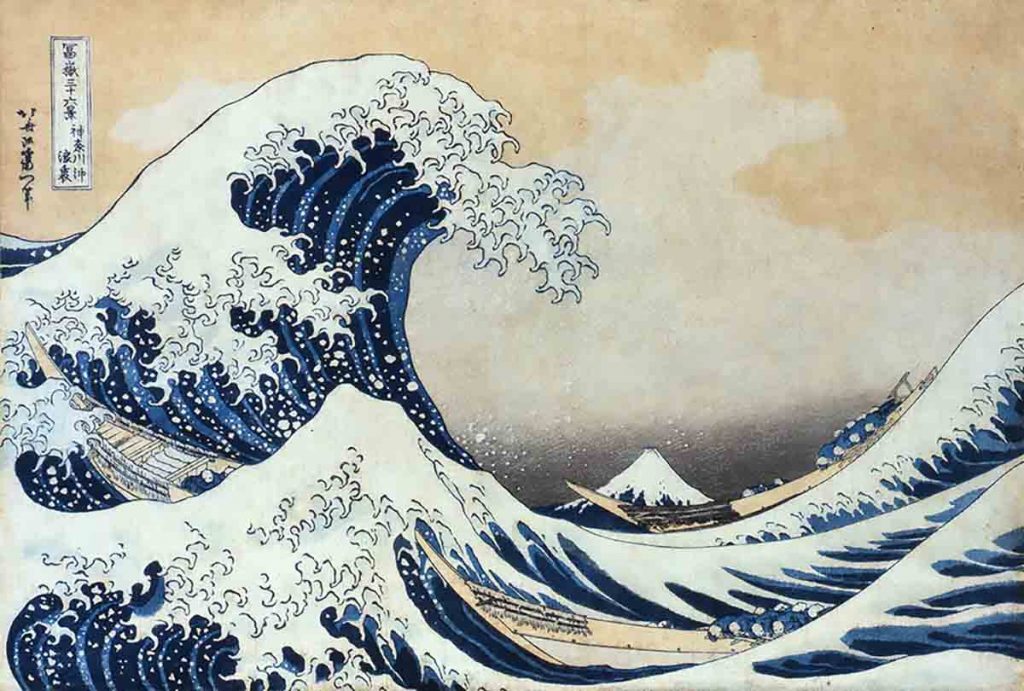 Even if we know that it was off the coast of Kanagawa, where on sea remains a mystery. Also, what was Hokusai trying to show us in this work?

The boats caught in the waves seen in this print are fast boats transporting fresh fish to the markets of Edo. I think Hokusai intended to show the enormous wave rise up powerfully with splashing water, and humans at the mercy of nature’s fury, while Mount Fuji appears quietly in the background.

Hokusai must have wanted to depict this bizarre composition of the huge wave in the background, with a tiny Mount Fuji under the crumbling wave at the end of its arcing curve.

The dramatic themes of humans versus nature and the raging wave against a backdrop of Mount Fuji influenced people all over the world. The French composer Claude Debussy, for instance, composed a piece entitled The Sea, inspired by the Great Wave.

The copy of Under the Wave off Kanagawa in the collection of the Sumida Hokusai Museum is in good condition, so the colors of the sky and shape of the clouds can be seen clearly.

As shown in this article, Hokusai’s Thirty-Six Views of Mount Fuji is filled with interesting techniques and ideas. I hope you will also enjoy the following book to see all the images in Hokusai’s monumental series.

Thirty-Six Views of Mount Fuji: The Art Box (Kodansha, 2020, in Japanese) was originally planned to be a companion piece to the current exhibition, “THE HOKUSAI ー The Series Thirty-Six Views of Mount Fuji and a Long Lost Picture Scrollー”. The current exhibition has been reopened following a temporary closure to accommodate COVID-19 preventive measures. (The companion exhibition has been postponed to Summer 2021.)

The Sumida Hokusai Museum and the publisher, Kodansha, nevertheless decided to publish the book with the hope that visitors would enjoy the full depth of Hokusai’s work and begin the series from home. As our first official publication of the Thirty-Six Views of Mount Fuji, we have paid special attention to the colors in the book accompanied by helpful explanations.

To Purchase: When visiting the exhibition, or through Amazon Japan, at this link.

For Additional Information: Call or visit the Hokusai Museum, at these links。

Atsuko Okuda is the chief curator of The Sumida Hokusai Museum.