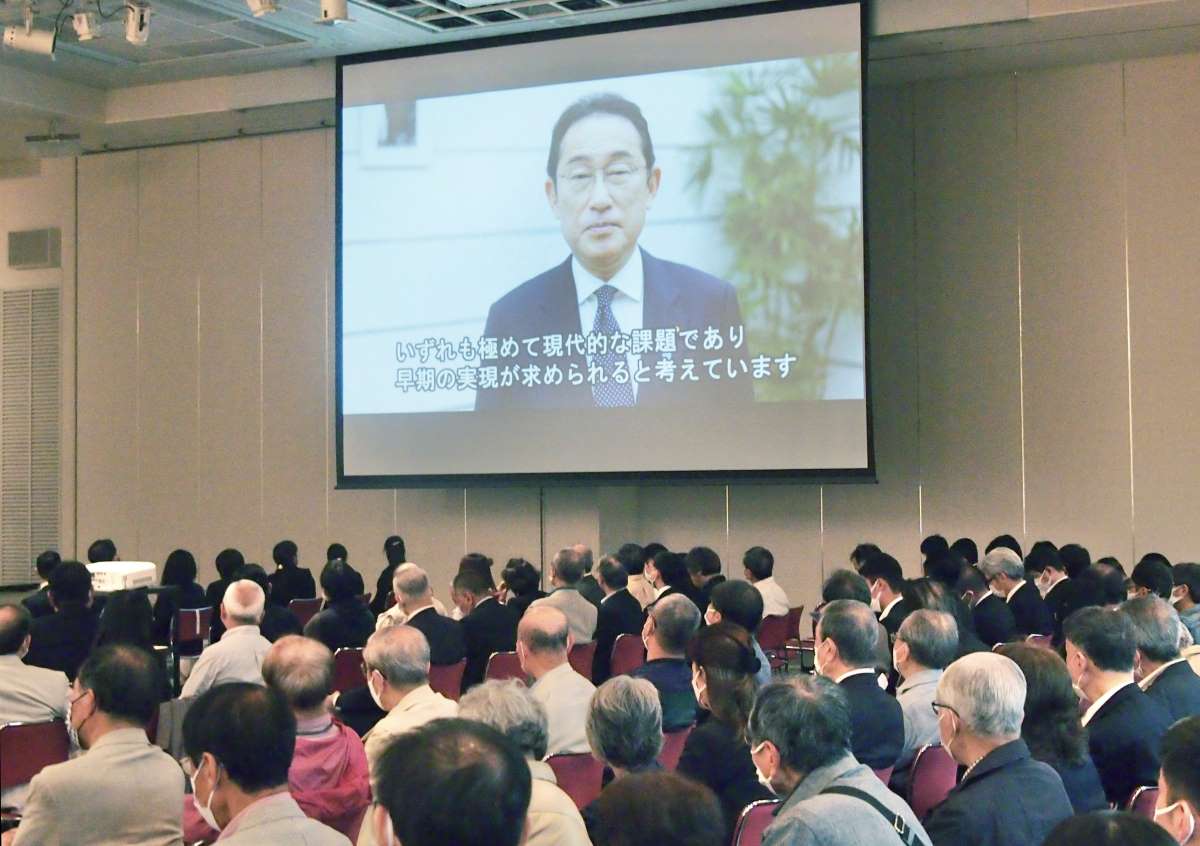 Prime Minister Fumio Kishida sends a message to a Constitutional rally in central Tokyo on May 3, 2022 (photo by Issei Tanaka).

Public opinion polls sometimes lead to contradictory data. This was clearly demonstrated in a nationwide opinion poll published by the Asahi Shimbun on Japan’s Constitution Memorial Day, May 3.

According to the poll, only 33% of respondents think that Article 9 of the Japanese Constitution “should be changed,” far behind the 59% who think it “should not be changed.” This data seems to show that the public is largely not in favor of revising Article 9.

However, the same poll showed that 55% of respondents were in favor of the Liberal Democratic Party’s (LDP) proposal to amend Article 9 to clearly acknowledge the existence of Japan’s Self-Defense Forces while leaving war-renouncing Paragraphs 1 and 2 intact. This greatly surpassed the 34% who were against it.

So which is it? The data doesn’t add up.

A likely explanation is that many voters find the idea of revising Article 9 repulsive because they think it will lead to drastic changes, such as abandoning pacifism. Or maybe it’s because the LDP needs to work harder to make the public understand its proposal to acknowledge the Self-Defense Forces in the Constitution.

Or it could be a combination of both.

Respondents were also asked about LDP’s proposal in another nationwide opinion poll published on May 3 ー this one conducted by the Yomiuri Shimbun. The results, 58% in favor of Amending Article 9, and 37% opposed, were similar to that of the Asahi Shimbun. Both showing those in favor leading by more than 20%.

The Yomiuri Shimbun’s poll also asked respondents what they thought should be amended in or added to the Constitution. Allowing for multiple answers, the most common response at 45% was “the retention of military forces for self-defense.”

A Cabinet Office poll conducted in January 2018 also found that approximately 90% of the respondents had a good impression of the Self-Defense Forces.

With the developments in Japan’s neighboring countries — Russia’s ongoing invasion of Ukraine, North Korea launching missiles  like it’s the only thing it knows how to do, and China’s unconcealed intentions of invading Taiwan — the inclusion of the Self-Defense Forces in the Constitution is more urgent than ever.

Prime Minister Fumio Kishida has stated that he will “put an end to the debate over the unconstitutionality of the Self-Defense Forces.” The hope is that he carries through.

The majority of Japanese citizens are eagerly waiting for the day when their constitutional right to referendum can finally be exercised for the first time.

(Read the Sankeisho story in Japanese at this link.)