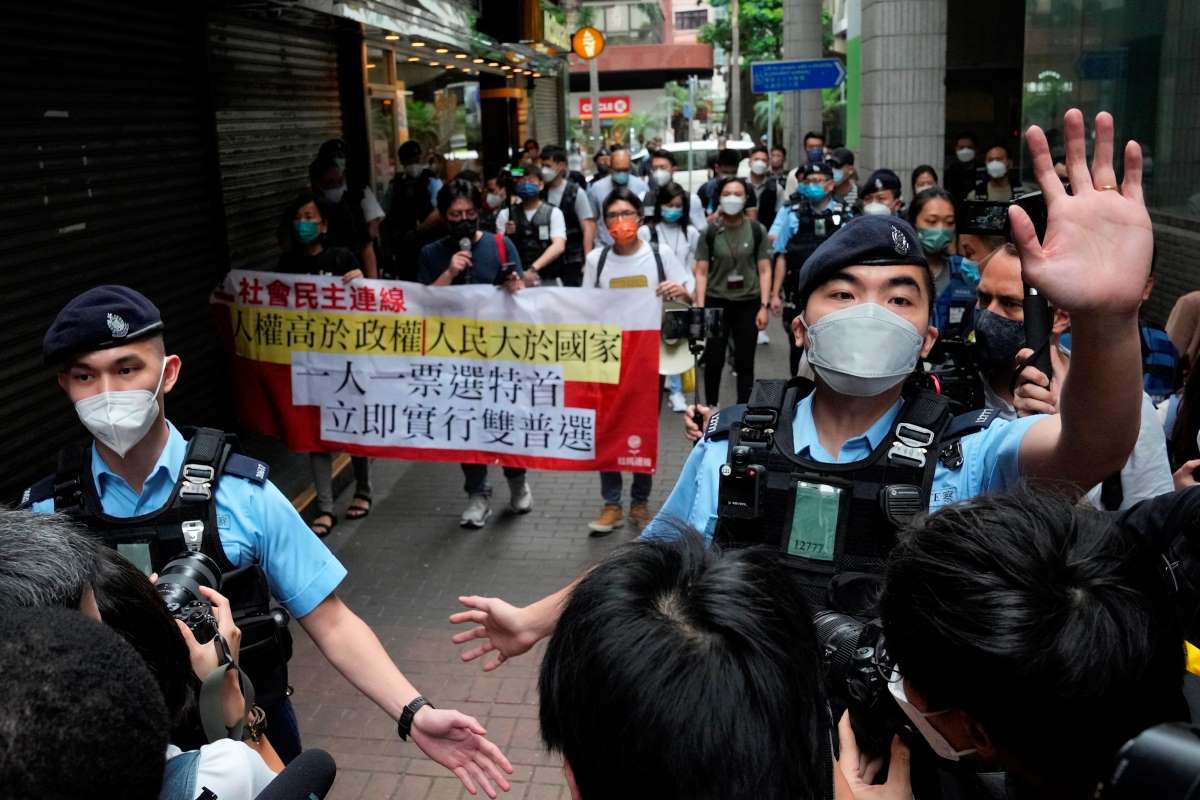 Pro-democracy protesters are surrounded by police officers as they carry banner against the chief executive election near a polling station in Hong Kong, Sunday, May 8, 2022. A Hong Kong election committee voted Sunday for the city's only leadership candidate, John Lee, who won the election with a 99% vote and became Hong Kong's next chief executive. The banner reads "Human rights is higher than the regime. One person, one vote for the chief executive, immediately implement universal suffrage." (AP Photo/Kin Cheung)

TAIPEI — John Lee, backed by Chinese President Xi Jinping’s leadership, was elected Hong Kong’s Chief Executive with more than 99% of the votes at the chief executive election on May 8.

A Hong Kong democracy activist living in Taiwan criticized the election, saying, “Choosing who to support out of multiple candidates is a basic principle of democracy. But a situation where one person secures almost all the votes cannot be called an election.”

The incumbent Chief Executive Carrie Lam and her predecessor Leung Chun-ying — both said to have been internally picked by Beijing — each won 67% and 66% of the votes in the 2017 election and the 2012 election, respectively. More than 30% of the Election Committee, including democrats who were against the Beijing-backed candidates, voiced their opposition through their votes.

However, since the Hong Kong National Security Law came into effect in 2020, the Chinese central government in Beijing has held complete control of the Election Committee, stamping out all dissenting voices.

RELATED: Waiting for the Day When Hong Kong is Liberated

On May 9, the day after his election, Lee met Carrie Lam and visited the Hong Kong Liaison Office (the Chinese government’s agency in Hong Kong which reports to the State Council of China) and the Chinese People’s Liberation Army Hong Kong Garrison. There he gave a victory speech, which reiterated his intention to place importance on China.

Human rights activists in Hong Kong are concerned that the crackdown on the democracy movement will become even more severe under Lee, who is beholden to Beijing. That in turn could exacerbate the human rights situation in Hong Kong.

Xi’s leadership has already announced that it wants to invite young people from Hong Kong and Macau to Guangdong Province to “increase their sense of belonging to the motherland” through education and employment. Fears are growing that Hong Kong will further lose its identity and completely become “China’s Hong Kong.”