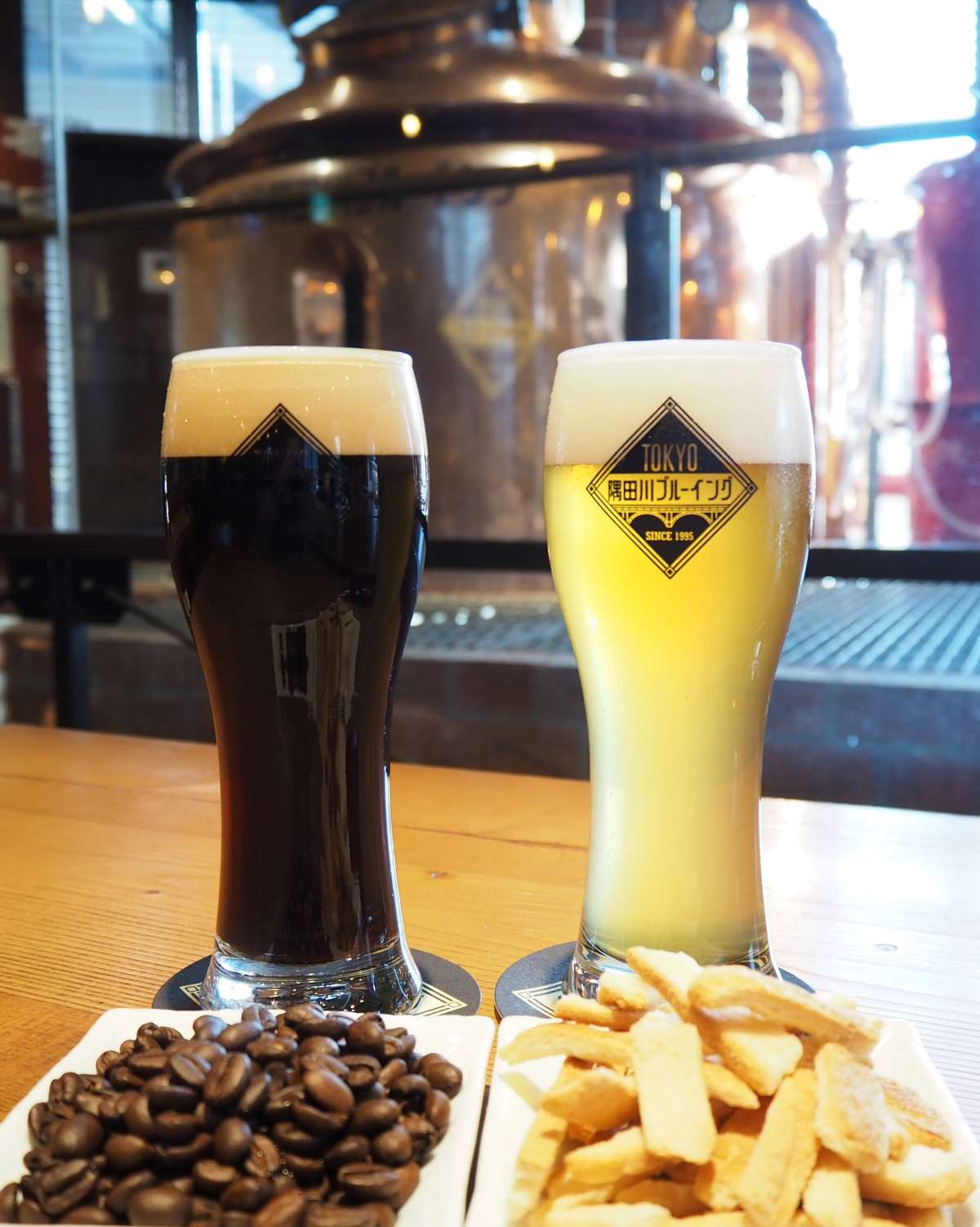 Find more articles like this on our new website Japan 2 Earth, sparking a transition on the environment and SDGs.

Upcycling is an approach that takes a waste material and gives it new value by converting it into a new and different product. This process is popular in the fashion industry. But it can also be seen in the production of beer in the Kuramae district of Tokyo’s Taito Ward.

Unwanted bread crusts from a sandwich shop are transformed into white beer. Coffee beans from test roasts, normally thrown away, are used to brew dark beer.

The flavors of these mottainai (“too good to waste”) ingredients, previously thrown out even though there were no problems with their quality or safety, come alive as exceptional aromas in beers. But goods are not the only thing circulating. The initiative has also promoted the flow of people-to-people relationships in this downtown community.

“Before, we spent around ¥3,000 JPY ($22 USD) every month to dispose of bread crusts, but now we have zero waste. Plus, it makes me so happy that they make such great tasting beer,” Kazuko Fukuchi, 58, owner of Marcelino Mori, a bakery popular for its sizable katsu and fruit sandwiches, says excitedly.

Since her father’s generation, the bakery has always cut off crusts to make its sandwiches easier for children and the elderly to eat. When the breadcrumb company that was buying the crusts went out of business, the bakery was faced with a problem. Sometimes the crusts were given away for free to customers who wanted them. But with approximately 20 kilograms of bread crusts a week, most ended up as waste.

“I felt really bad and even called a zoo to ask if the bread crusts could be used as food for the animals,” Fukuchi adds.

Then in June of 2021, a friend and fellow mom, Reiko Shiraha, 50, owner of a coffee roastery called Ennoki, suggested to Fukuchi the possibility of turning the crusts into beer. At the time, a local initiative in resource circulation spearheaded by Shiraha, the Kuramae model, had just partnered with Asahi Breweries. A new project was underway to brew beer using coffee bean waste at Tokyo Sumidagawa Brewing, a craft beer brewery that sits on the opposite bank of the Sumida River in Sumida Ward.

Ultimately, two new products were born. July 2021 saw the release of a beer with a coffee aroma called the Kuramae Black, followed by the Kuramae White, a mildly sweet beer with a bread aroma, in October. The beers have become popular new drinks that can be enjoyed at the brewery’s restaurant.

The opportunity came knocking in March 2022, when Shiraha messaged Toru Kohara, 37, an Asahi Breweries employee working in upcycling, on Twitter, suggesting they “work together as fellow downtowners.”

Plans for a project quickly came together. Currently, 13 cafes and shops have joined the town’s upcycling project. Bread crusts not used for beer and eggshells from cake making are collected and made into compost so that nothing is wasted.

The fact that disabled people who commute to the local welfare workshop collect the materials for upcycling also adds a special aspect to the project. They take the bread crusts back to the workshop and bake them in ovens to process them into beer ingredients. Because the brewery purchases the ingredients from them, they are able to earn an income.

“These are heavy. Can you carry them okay?” “No worries, I’m strong.” This was an exchange I overheard at the bakery.

Fukuchi of Marcelino Mori bakery explains, “I’m happy that it’s not just about goods being circulated. The circulation of people is also growing. Customers who come to our store to buy sandwiches often let us know that they went across the river and sampled the beer, and they say it’s good! Our project has been able to continue because for us practicing the SDGs (UN Sustainable Development Goals) is fun, not a burden.”

On another note, the beer upcycling business again expanded with the establishment of Asahi YOU. US, Ltd. (Sumida Ward, Tokyo) under the Asahi Group in January. The new subsidiary will unfold initiatives in environmental protection and social contributions, producing unusual beers in various regions.

In April, Sayama Green, a beer made with kebacha (stem peel removed in tea making) was launched in a joint project with a tea producer in Sayama, a city in Saitama Prefecture. May brought the release of Sanmu Red, a beer made from fermented surplus strawberries from a tourist farm in Sanmu, Chiba Prefecture. Plans for more new products are underway.

Are production costs lower when products are made from food waste? To this question, unit leader Ichiro Moda, 49, answers, “Costs aren’t reduced because special labor is required.” He adds, “We work with the people in each region to reduce waste and address any problems they might face. Through beer, I hope we can continue to make such contributions.”

I would also like to make a contribution by drinking the beers myself!