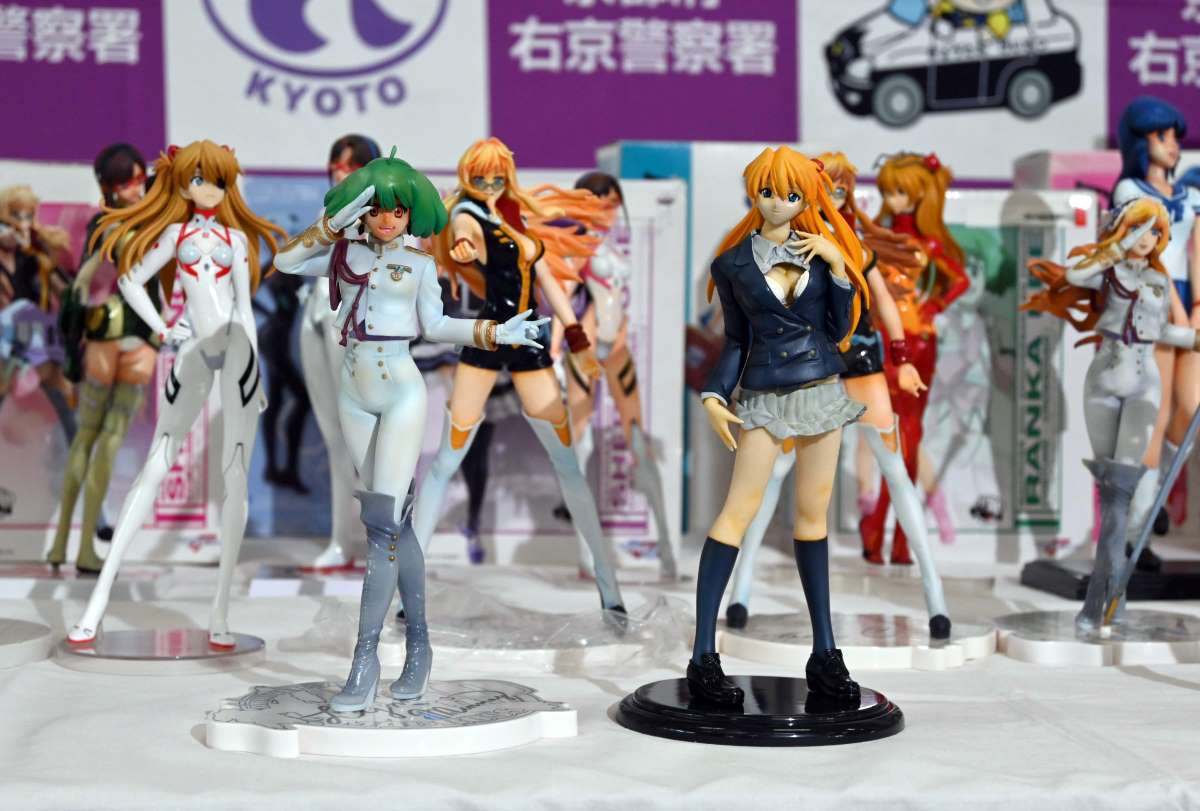 Figures of the popular anime "Neon Genesis Evangelion" that were confiscated by police are seen in Ukyo Ward, Kyoto in May (photo by Rintaro Kinoshita).

Japanese anime and manga are highly popular worldwide and have grown into a large industry. At the same time, counterfeits and plagiarism have also become rampant. Losses derived from plagiarism alone amount to more than ￥ 1 trillion JPY ($7.5 billion USD).

Intellectual property rights (IP) are infringed both within Japan and abroad. So while law enforcement plays an endless game of cat and mouse, production studios also scramble to take countermeasures.

Some of those losses are from Makaizo, which literally means “devil’s modification.” It is a technique in which the body of a popular anime figure gets swapped for that of another.

Dozens of figures from the popular anime Neon Genesis Evangelion are lined up on a desk. Most are figures of Asuka Langley Soryu, one of the characters, and all of them strongly emphasize sexual details and poses, unlike the brand’s official figures.

A 54-year-old man from Tsuyama City, Okayama Prefecture, modified these figures makaizo-style and sold them on the auction site Yahoo! Auctions. Kyoto Prefectural Police arrested him in May for breach of copyright law, as he infringed the Evangeleon copyright and sold the figures for a profit.

The man purchased counterfeit figures of Asuka and other characters online for a few thousand yen,. Then he swapped their heads and bodies, and sold them for approximately ￥10,000 JPY ($75 USD). His sales over the period from June 2020 to October 2021 amounted to ￥1.8 million JPY ($13.5 thousand USD).

The police say, “The base figures are counterfeit, so they aren’t very well-made. But you can tell at a glance that they are of Asuka.”

There seems to be no end to copyright infringement targeting domestic creative work like anime and manga. Other than the extreme figure modification known as makaizo, there are also pirate sites that illegally upload manga on the internet and videos called “fast movies.” These condense movies into short clips.

In this situation, law enforcement is cracking down on copyright infringement.

In 2018, police from nine different prefectures cooperated to arrest Chinese men belonging to Hanhuazu, a group that translates foreign works into Chinese and uploads them on the internet. And in 2019, the man running Mangamura, the largest pirate site in Japan, was arrested.

However, copyright infringement is often carried out abroad. A representative from Kyoto Prefectural Police says, “We cannot do much when a site is being run from abroad,” noting the difficulty in cracking down on the practice.

The content producers who see their intellectual property’s copyright infringed are not simply watching without acting.

Japanese publisher Shogakukan (Tokyo), which publishes popular manga magazines such as Shonen Sunday, started producing official translations in collaboration with fans overseas and publishing them online at the end of 2021.

The move, which is an attempt to eradicate piracy by providing official versions before pirates can make their own, is grounded in reverse thinking.

“Even private citizens have taken to publishing copyright-protected images and work online. And there are many cases in which they infringe a copyright without knowing.

“This sort of damage has increased since the internet and social media have become widespread,” says Professor Kaoru Kobashi of Kindai University, an expert in IP rights protection.

He states that in the case of pirate sites, “The financial damage they incur for production companies and publishers is massive.” He explains that even if they sue the people running the sites, they are unable to obtain adequate compensation for their losses, adding insult to injury.

Considering that pirate sites’ copyright infringement stems from the existence of thousands of users, Professor Kobashi explains that “It is necessary to educate private citizens so that they know and understand what copyright is.”